LONDON, United Kingdom — Renzo Rosso, president of Only The Brave (OTB) group, which controls Maison Margiela, made a group of carefully chosen journalists very happy this afternoon at the tail end of London’s menswear shows by hosting the presentation of a small collection created by John Galliano for Margiela’s Artisanal line, normally shown in Paris during Couture Week. The presentation took place in a new glass office tower just behind Buckingham Palace on one of those cloudy winter afternoons that makes you long for something to take your mind off it all.

Well, we got it. Whisked up to a long narrow room, pristine white with two single rows of white chairs, all the top journalists were in attendance, along with Anna Wintour, unwavering in her belief in John Galliano, and Hamish Bowles. It was great to see fellow designers Rifat Özbek, Christopher Bailey and Alber Elbaz there to lend their support, along with stylists Katie Grand and Charlotte Stockdale, the photographer Nick Knight and his wife Charlotte, who both go back a long way with Galliano, as well as Mesh Chhibber, who worked with the designer many years ago. Select retailers like Mark Lee of Barneys New York, Adrian Joffe of Dover Street Market and Carla Sozzani of 10 Corso Como were also there, along with Mr Rosso, of course. As we waited for the show to begin, the conversation was hushed, but the room was charged with palpable anticipation.

The very first dress set the tone for what was to come. An homage to artisanal skills, the look went back to where Galliano's heart has always been ever since I worked with him at Central Saint Martins: the atelier. Even then, he was always fascinated by the underpinnings and the hidden techniques that made possible the wondrous collections of uniquely beautiful clothes he created for his own label and also for Dior.

As the show continued, I am sure that I was not the only one who held his breath, wondering if the much rehearsed troubles that have bedevilled Galliano’s life for the past three years had in any way weakened his creativity. After the first six evening gowns we could relax. This was unmistakably John Galliano at full creative stretch doing what he alone does correctly; blending the highest technical skills and taste to create looks not only sexy but also ethereal. In short, he gave us the wonderland world that we had been waiting for.

As one dress followed another, it became apparent that it was artisanal techniques that interested the designer this time around. He gave us no new vision, but reprised his past as he sent out gorgeous toiles, finished garments and half completed ones, just as he has done before. It was almost as if, in a fairyland scenario not unlike the Pixar film Toy Story, we were interlopers watching Galliano’s creations come to life when all the humans had left the atelier for the night and the dresses could take over.

So, was this a moment of total triumph? Were all the ghosts of past traumas laid to rest?

No, of course not. Galliano is only human. Like the traditional wandering minstrel of legend and song who he has so frequently recalled over all the years I have followed him, Galliano had, for this collection, naturally enough, dipped and dived over the hinterland of his career. It is the way creativity works. We all know that a great novelist repeats his themes and we only need look at Picasso to see how effectively personal pasts can be endlessly quarried. Galliano is no exception. He gave us nothing totally new as far as creative thought, but we were all happy enough with seeing that his creativity was still all in one piece considering the ghosts he has presumably had to learn to overcome. And, in fact, it was an unnerving experience for us all to see the ghosts of past Galliano runways coming towards us this afternoon, ghosts in which everything was familiar but slightly rearranged.

I felt a more than slight sense of déjà vu. The first few garments, highly stylised and heavily covered in embroidery, were pure fantasy and, incidentally, let us all know that there is life after Dior. This kind of workmanship was once thought only possible in the traditional ateliers of Paris, but on the Margiela runway today this was shown to be a view well in need of revision. These creations were masterly not only in thinking but also in execution. I assume (the brand declined to release hard facts about the creative process) that they were made in the Margiela workrooms and, if so, then perhaps I should not be so surprised about the quality. It has to be remembered that the Margiela label has always had the highest respect for cloth and for couture. I vividly remember the small, highly-focused collections of 'couture trouvé' where the Margiela technicians took random articles of clothing — gloves, for example — and created from them marvellous garments which were couture, in that they were hand-made and totally unique, relying as they did on whatever abandoned raw materials and artisanally useable bits and pieces were able to be hoarded and eventually made into a form of everyday couture.

So, is the Galliano-Margiela liaison going to work? On the evidence of today's ravishingly romantic showing, there seems to be every reason for hope. John Galliano is still a genius. The Margiela workrooms are surely up to any challenges he throws at them. Renzo Rosso is a strong and sensitive leader of the brand. But — and I am in no way diminishing what we saw today — Galliano’s romantic take on fashion must be guided forward without too much referencing of his glorious time at Dior and before, as there is a danger that what was once beautiful could become camp.

Make no mistake. If dressmaking and tailoring are to survive, they will do so in the hands of designers like John Galliano. And, today, a shot for quality was convincingly fired over the bows of a fashion world wallowing in mediocrity. I am delighted that the trigger was pulled by John Galliano — and that I was there to share a moment that can be summed up in the dictum of Galliano’s new boss, Renzo Rosso: only the brave. 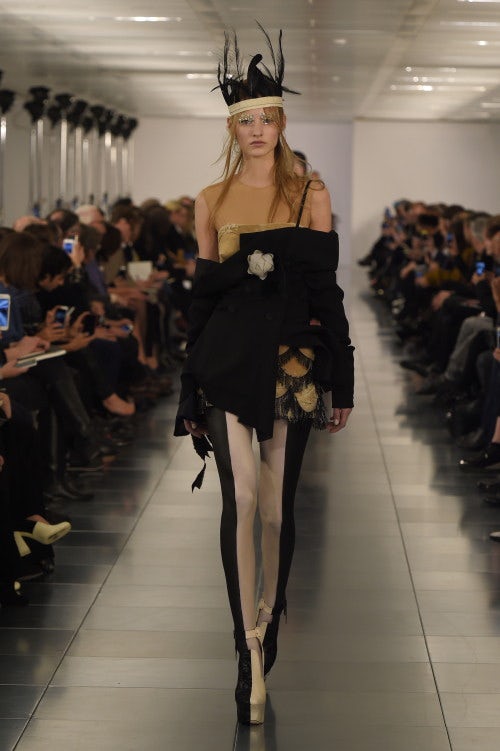 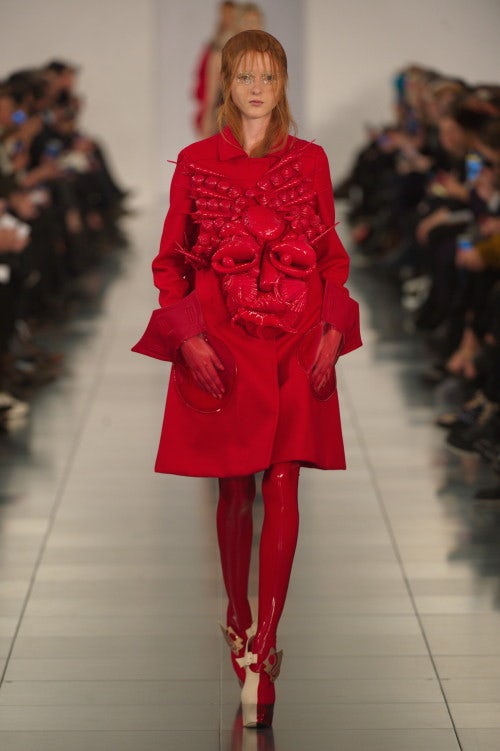 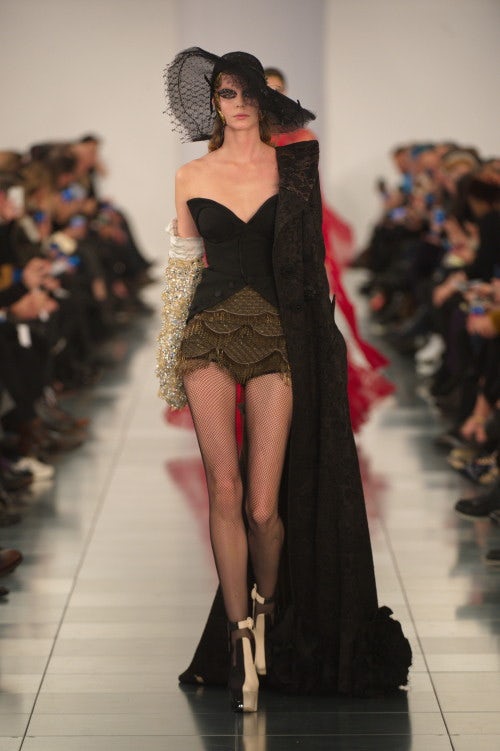 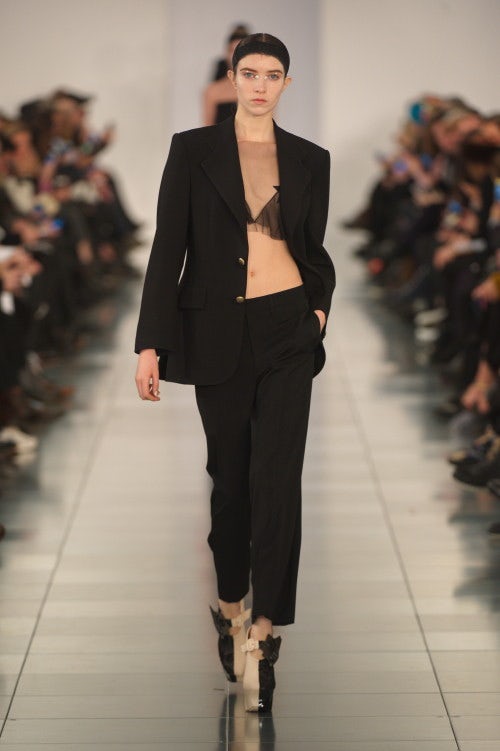 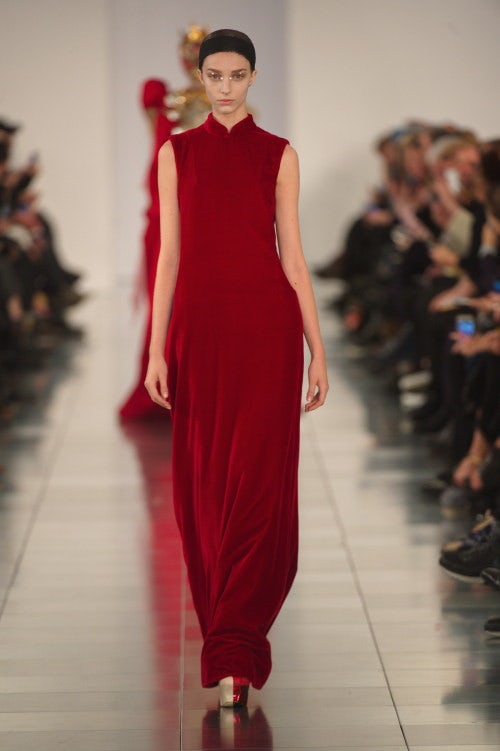