Martin Margiela is widely considered one of the most talented designers in the history of fashion — and its most elusive. So, when two years ago a Dutch company Mint Film released the documentary We Margiela, it understandably piqued people's interest.

The film traces the history and legacy of Margiela's maison. Its director, Menna Laura Meijer, interviewed members of Margiela's former team, including Jenny Meirens, the label's co-founder and Margiela's business partner who passed away in 2017, shortly before the documentary was released. Among others it also featured Patrick Scallon, Margiela's head of press, Lutz Huelle, Margiela's knitwear designer, and Inge Grognard, who did the makeup for Margiela's shows. The team reminisced about the maison; about how hard and thrilling it was to work there. According to Meijer, Margiela refused to be a part of her documentary, which is unsurprising and in line with his ethos of anonymity.

It was quite a surprise then to learn that a new documentary, featuring none other than the man himself was afoot. Martin Margiela: In His Own Words, which premiered last week at the DOC NYC film festival, delivers exactly what its title promises, a history of the brand told by the man himself. The immediate question arises; why would a notoriously reclusive designer decide to subject himself to an entire documentary?

The new film is directed by Reiner Holzemer, the German filmmaker who also directed the 2017 documentary, Dries, about another Belgian designer, Dries Van Noten. Dries was a pleasant set piece, but then Van Noten's is a pleasant and straightforward success story of an independent designer. There was no sale (this was before the Puig acquisition), no business partner to contend with, no potentially villainous new owner taking over, and no carefully calculated mystery about him.

Martin Margiela: In His Own Words is also a pleasant set piece, but the problem is that Margiela's story is not straightforward at all. Several people I have spoken to who are connected to Margiela in one way or another told me that he thoroughly disliked We Margiela, especially the way it lauded Meirens, with whom Margiela reportedly had a falling out after the sale of their brand to Renzo Rosso's company, Only the Brave. Holzemer also confirmed Margiela's dissatisfaction with We Margiela during our in-person interview, as did Meijer, We Margiela's director. 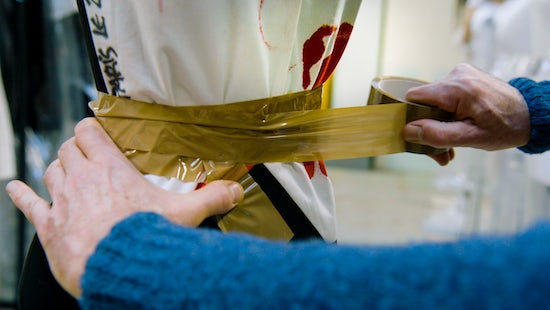 A still from the documentary where Martin Margiela creates a duct tape belt for a mannequin at Palais Galliera Paris | Source: Courtesy

In this light, it makes sense that Margiela conceivably wanted to tell the story in his own way. As a director, Holzemer must have seemed like a good choice because he tends to take a deferential approach to his subjects. After the release of Dries, Holzemer made several attempts to get Margiela for a documentary, but the designer remained characteristically silent. What made him change his mind all of a sudden one can only speculate, but dissatisfaction with We Margiela's point of view and the desire to control the narrative of his legacy seems as good of a reason as any.

Holzemer told me in an in-person interview that Margiela insisted on a close involvement in the making of the documentary, was twice present in the cutting room, and tried to influence the director in the way the documentary was being shaped. As a result, what you get in the new film is a thoroughly unchallenging portrait of Margiela himself. The film is a pretty straightforward affair, largely set in chronological order, with some enlightening biographical episodes that are followed by a matter-of-fact commentary by Margiela on the history of his collections. Some esteemed talking heads like Cathy Horyn, Carine Roitfield, and Carla Sozzani provide due adulation, and virtually no one from the former company is interviewed. But despite the marginal presence of other characters, the film is a Martin Margiela show. It is, uncharacteristically and even somewhat jarringly, infused with his "I," as opposed to the "We" of We Margiela. Jarringly, because we are so used to the narrative of Maison Martin Margiela as a collective, the narrative that the brand itself perpetuated.

The "I" take is not necessarily unfair, as in We Margiela Scallon talks about how Margiela after all was the designer, but it was the maison that did everything else, including interviews and exhibitions, and the vision was not Margiela's alone. About Meirens, Scallon says, "She was absolutely intrinsic to what Margiela was as a company. For me Margiela was fifty-fifty. The clothes wouldn't be as powerful if the company didn't behave the way it did."

We Margiela also contradicts the new documentary on other points. For example, Margiela maintains that his anonymity was simply the result of his shyness and that he refused to talk to journalists from the beginning. This is contradicted by Scallon, who in We Margiela says that Margiela's decision was as much of a PR strategy as it was a genuine move, and that it happened several years into the brand's existence. Margiela maintains that he wanted his clothes to do all the talking, which is also not true according to Scallon, who said that for several years Margiela himself briefed selected journalists on each collection. Given that Margiela is widely considered one of the most cerebral, conceptual designers, Huelle, also finds it hard to believe that Margiela would not want to explain his collections. "How can you not talk about the clothes, when there was so much to say?" he wonders out loud in We Margiela.

The immediate question arises; why would a notoriously reclusive designer decide to subject himself to an entire documentary?

What's more, and perhaps most importantly, the dissatisfaction with the way the company was run after Rosso, the owner of Diesel, bought it and Meirens left is palpable in We Margiela. In the latter documentary, Margiela simply glosses over the sale, as if it's a minor point not worth discussing, even though it's widely known that the sale was not a happy ending. Margiela says he left in 2008 because of the rise of the Internet with its immediate availability of content that made surprising the audience impossible. Maybe so, though today the designer still gets to surprise his show attendees no less than he did before; after all the Internet may be a broadcasting device, but it's not a time machine.

So what exactly is Martin Margiela: In His Own Words? A clear-eyed, balanced portrait of a designer who all of a sudden decided to break every one of his rules with regards to anonymity and silence? Or an attempt by Margiela to shape his own legacy the way he wishes it to be seen? We probably won't know. That Margiela was a brilliant designer who has made an immense contribution to contemporary fashion is beyond dispute. What is less clear is where the truth about Margiela lies.

The views expressed in this piece are those of the author and do not necessarily reflect the views of The Business of Fashion.

How to submit an Op-Ed: The Business of Fashion accepts opinion articles on a wide range of topics. The suggested length is 800 words, but submissions of any length will be considered. Submissions may be sent to contributors@businessoffashion.com. Please include ‘Op-Ed’ in the subject line. Given the volume of submissions we receive, we regret that we are unable to respond in the event that an article is not selected for publication.