LONDON, United Kingdom —In the fashion industry it’s increasingly a case of winner takes all. Economic profits, defined as net operating profits minus the cost of capital, are progressively in the hands of the few rather than the many. In fact, companies in the top 20 percent accounted for almost all the industry’s economic profit over the past decade. Worse still, for the majority at least, polarisation is accelerating; the winning group is getting smaller by the year.

The most powerful drivers of industry dynamics over the recent period are a decline in bricks and mortar footfall; a race to the bottom on pricing, especially in the middle and value segments; and an increasing shift in demand towards Asia.  Against this background, fashion houses are required to make significant investments in online, operations and physical stores, which need to change to remain relevant.

These dynamics are well known in an increasingly polarised industry. However, very few companies have worked out how to respond effectively. Luxury is riding the wave pretty successfully and discount is outperforming. Some iconic brands, however, are suffering and the mid-market is being squeezed. In terms of offering, department stores are generally struggling, while developed markets face significant challenges. 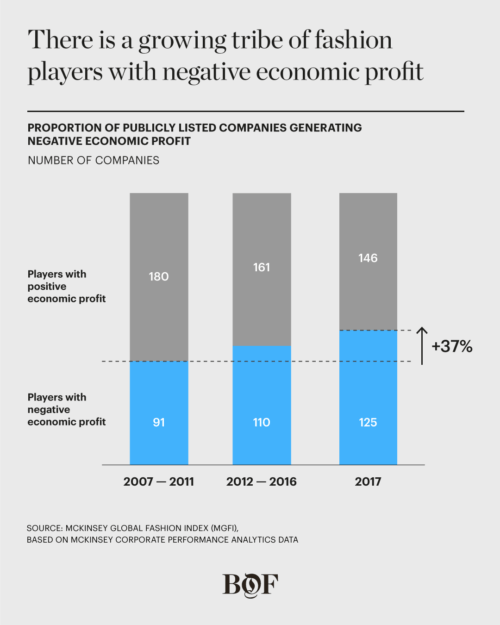 The bottom line is that 80 percent of listed fashion players are failing to make a profit. The worst-performing 20 percent incur almost all of the industry’s losses. However, the middle is also in trouble. The share of industry economic profit generated by the middle quantiles (20th to 80th percentile) fell to 6 percent in 2017, compared with 16 percent between 2007 and 2011. Meanwhile, 46 percent of fashion companies posted a negative economic profit in 2017, compared with 34 percent in 2007 to 2011.

It’s about investments that pay off

Digging deeper into the numbers, revenue growth is not the critical point. In fact, across the industry, firms are growing, in some cases strongly. In 2017, average growth in the top quintile of firms was 11 percent, while in the middle quantile it was 5 percent. Firms in the bottom quintile grew by 4 percent on average. Equally, margins are less relevant when it comes to relative performance. Average margins were in the 5-15 percent range among middle quantile firms in 2017.

The real difference between winners and losers is capital efficiency. In short, many companies are investing heavily in growth, operations and channels, but only a few are earning sufficient returns. The best performing quantile operates with an invested capital of 39 percent of revenues, while the lowest quartile expends 64 percent. Put another way, the best-performing companies invest 40 percent less for every dollar earned than the worst-performing quintile.

The implication is that it is impossible to buy your way out of problems, if you don’t have a clear direction for your investments. Instead, based on a clear understanding of the deficiencies, the small number of winning companies align their strategy and define a clear value proposition and undertake focused capital investments required to execute on the strategy. Of course, what this means in practice will vary from company to company. We see some, for example, that some have completely revived their brands, investing in online and bricks and mortar to build a new image. Others, meanwhile, have captured economies of scale online to achieve rapid growth.

Not surprisingly, there is a strong correlation between profitability (EBITDA) and economic profit. Quintiles with higher economic profit generally also report much higher EBITDAs. The worst performing quintile earned on average 5 percent EBITDA in 2017, which is less than a third of the top quintile. However, the middle quintiles reported EBITDA profitability of around 9 percent on average, hardly enough to cover depreciation and interest. They generated close to zero economic profit.

The risk of getting stuck 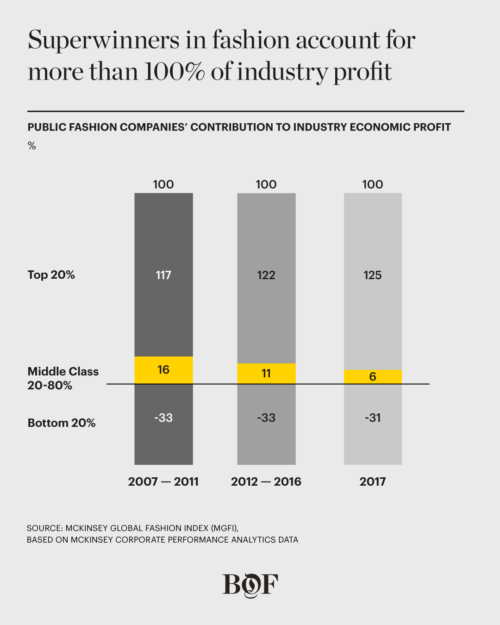 A concerning trend is the long-term lack of mobility between quintiles. Nearly three quarter of companies in the middle quantiles are still there five years later. Around one in five drops into the bottom quintile and becomes a value destroyer over the period. There is only a small chance of moving into the value creating segment. Around one in ten make the leap.

History shows that players that have moved into the bottom quintile over the previous three years have seen revenue growth decline from 8 percent on average to just 1 percent. Equally, EBIDTA has fallen from 11 percent to 6 percent and investment as a proportion of revenue has risen to 48 percent from 40 percent.

Still, sinking to rock bottom can, slightly surprisingly, be a route to redemption. More than 60 percent of surviving companies in the bottom quantile moved up the rankings in the following five years. Some 56 percent migrated to the middle quantiles and 6 percent made it to the top quantile.

To climb the rankings, companies need to change and refine their strategic direction. More of the same is rarely an effective strategy. A consistent alignment of the typical elements that strengthen the value proposition, mark an upswing in fortunes:

The bottom line? The fashion industry faces a stark set of circumstances. Companies that are not in the top 20 percent in terms of economic profit face a tough task in redirecting their trajectory. And there is a significant chance that things could get worse. In response, companies must undertake a brutal stocktaking of their assets and capabilities and understand what still contributes, what has become obsolete and what is missing from their strategies. They must be prepared to make radical and consistent decisions to renew their brands, customer relationships and distributions models. Not doing so may be akin to betting your success on last year’s trend.

Achim Berg is the global leader of McKinsey’s apparel, fashion and luxury group. Karsten Lafrenz leads the consumer service line of McKinsey's Transformation practice. In The Business of Fashion & McKinsey’s upcoming State of Fashion report, we will dive more deeply into the factors that separate the best from the rest.

The State of Fashion 2019: An ‘Urgent Awakening’ for the Industry