The designer tasked with reenergising the Italian leather house said lockdown had a liberating effect on him. Can he take it further?

The designer tasked with reenergising the Italian leather house said lockdown had a liberating effect on him. Can he take it further?

Like many people, Walter Chiapponi spent most of the last year at home, alone except for his two weimaraners. He said he’s been getting to know himself better, cooking a lot, moving the art around on his walls. His collection includes work by Wolfgang Tillmans, Corinne Day, Larry Clark and, his favourite, Nan Goldin. “Real life, not much glamour,” he explained. “I love people as they are.”

Maybe an appetite for Goldin grit isn’t quite what you’d expect from a man whose professional life is consumed by the creative directorship of leather goods house Tod’s, quintessence of discreet Italian taste and style. But Chiapponi, tasked with freshening the brand’s image after five years of declining sales, claimed lockdown had a liberating effect on him. His fashion culture may be haut bourgeois, but he finds that boring. Now he’s looking to insinuate his private passions into his work.

Baby steps, though. Find the film Chiapponi made to go with his men’s collection and you’ll see young Italian heartthrob Lorenzo Zurzolo of Netflix’s Baby hanging around in a gorgeous villa in the countryside north of Milan. To these eyes, he was dressed like a well-heeled country gent, but Chiapponi wanted to conjure up John Kennedy Jr, one of his male style icons. “Big leather jacket, velvet trousers, cashmere sweater, classic pieces worn in an eccentric, slightly ’90s, grunge-y way.” If you say so, Walter. One clue was apparently the absence of shirt. Chiapponi acknowledged the extreme subtlety of the “subversion.” “It’s hard to make a revolution in menswear at Tod’s because it’s such a part of the DNA. All you can do is play with codes.” 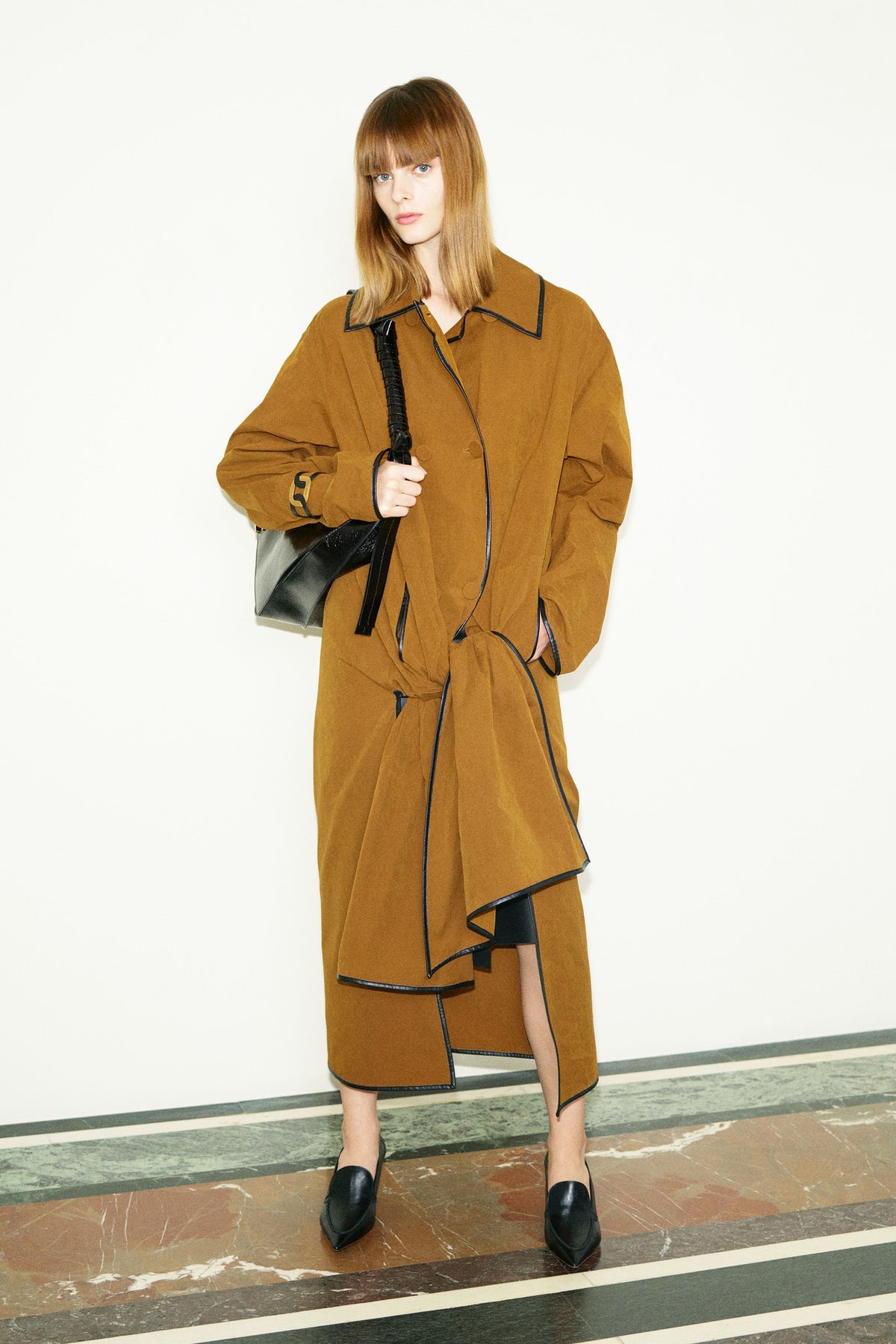 He said womenswear was always easier for him. I like to think the time Chiapponi spent working with Tomas Maier at Bottega Veneta would have been an education in the way bourgeois dress can be twisted to sublime effect. The hyper-sophistication of the BV woman was often unhinged by a slightly screwy streak, and there has been a certain “nonchalance and wildness”, as Chiapponi calls it, in Tod’s womenswear since he showed his first collection for the brand last February: the proportions, nipped or voluminous, the colours, sober or exuberant, the interplay of perfectly polished and wilfully undone.

He insisted he’d really expanded on those distinctions in the collection he launched on Friday. If it wasn’t immediately obvious, credit consummate Italian craftsmanship, which elevates eccentricity to a point where it looks anything but. Chiapponi said he’d borrowed exaggerated effects from 1950s haute couture: the leather jacket padded so it looked like a classic robe manteau, the oversize coat with the ruffled collar… and those distinctive proportions. In context, the ladylike pussy-bowed blouses did look quite twisted, bourgeois gone bad like Belle de Jour, especially when paired with a black leather skirt.

Chiapponi actually mentioned the Catherine Deneuve classic in passing. He loves movies and has relished the opportunity the pandemic has provided to create a filmic alternative to a physical fashion show. His latest was lensed in gallerist Massimo di Carlo’s new Milan space, originally designed in the 1930s by Piero Portaluppi, the architect responsible for the Villa Necchi, where Tod’s has presented its collections in the past. (Film buffs will know it as the backdrop for Luca Guadagnino’s I Am Love.)

Chiapponi liked his models moving at cross-purposes through di Carlo’s labyrinthine space, some in slim-line skirts and kitten heels, others in slim-line cords and creeper-soled loafers. It was slightly schizy, never more so than in a look that matched chunky houndstooth jacket and culottes with an oversized trapper hat and big, bovver-y boots. How this would have played out in a sequenced show, where a degree of cohesion might be expected, was hard to see. But Chiapponi said he enjoys the storytelling of film. “It’s easier to play like a costume designer on video than a fashion designer. I’m living in that moment of individuality and diversity.”

Watching the film, it was also easier to imagine the women he admires in his clothes: archetypes like Monica Vitti and Penelope Cruz, newer stars like Amy Adams and Emma Stone. That Chiapponi has been attracting that kind of attention to Tod’s surprises him. His modesty is winning. But now that lockdown has flipped his switch, I’d love to see him take it further. “I’m following my emotions more, I’m less analytical,” he claimed. “I’m not telling myself, ‘No, you can’t do that at Tod’s.’”