The luxury industry faces a catch-22 in the Middle East where brands encounter major obstacles casting Arab celebrities for ad campaigns and magazines.

DUBAI, United Arab Emirates — If our magazine had existed from the mid-20th century, it is likely that we would have proudly featured the many icons of Arab cinema and music between then and now. Egyptian actress Madiha Yousri, Lebanese star Amal al-Atrash (better known as Asmahan) and certainly the Cairo-based 1980s television and film star Sherihan were all known for their strong sense of personal style and the influence they wielded in popular culture and fashion in the Middle East.

Such women would have been a natural fit for a luxury magazine like ours but, alas, Harper’s Bazaar Arabia has only been around for eight years and stars like these are not so easy to find today. The Arabian incarnation of Harper’s Bazaar is unique among most luxury fashion titles because we rarely feature local or regional stars on our covers.

It is a similar situation among high fashion and jewellery brands. While many have successfully harnessed Chinese, Indian and Latin stars of screen and style to serve as ambassadors, Middle Eastern luxury brand representatives remain something of an enigma.

Brands like Dior translate their name into Arabic for store-fronts in The Dubai Mall and for advertising hoardings along Sheikh Zayed Road. But when it comes to the faces of the women fronting their multi-million dirham campaigns, it is more likely that they will be European or American than of Arab descent.

This presents a problem for luxury brands that increasingly need to localise their marketing campaigns while presenting a familiar, yet aspirational, face for valuable customers in the Middle East.

The reasons that relatively few Arab celebrities have partnered with luxury brands in the region are multiple and varied. Deena Aljuhani Abdulaziz, the Saudi owner of luxury boutique D’NA in Riyadh and Doha, and an unwitting poster-child for Arabian style icon status, explains, “In the Gulf, people are extremely conservative. This is a culture that does not look highly upon people that are visible.” She likens the attitude towards careers in the entertainment industry to “Britain in the 1920s. If you’re from a particular family, it’s highly frowned upon.”

Aspiring to become an actor or singer is not something that most young girls growing up in affluent families from the Gulf Cooperation Council (GCC) region would be allowed to seriously consider. However, it is the GCC countries of Bahrain, Kuwait, Oman, Qatar, Saudi Arabia and the United Arab Emirates that account for the majority of the Middle East’s luxury spending power.

“In the GCC, it’s not something you would ever see a family grooming a child to become. It’s a no-no. Even boys should not be involved,” explains Emirati lawyer Diana Hamade, who has a right of audience before all United Arab Emirates courts. Idealising a celebrity actor, singer or entertainer is also widely discouraged. “Parents don’t want their kids to look at celebrities and like them. It is seen as haram and not acceptable,” she adds. 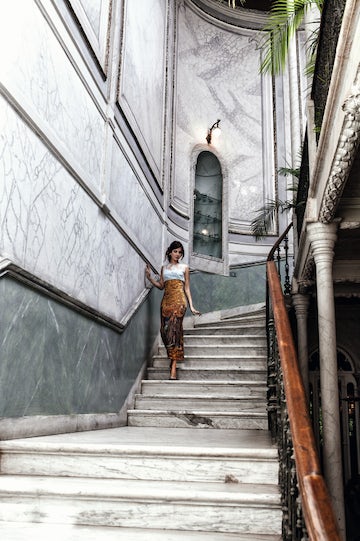 This presents a challenge for the luxury fashion industry, which relies on celebrity brand ambassadors — most frequently stars of film, music and fashion — to connect with consumers and help sell merchandise. In markets such as the Middle East, which has its own distinct aesthetic and cultural style preferences, a brand’s global marketing message can often be inappropriate or irrelevant. As Hamade says, “The fashion world is disconnected. I don’t think an Arab woman is in the head of any designer when they create.”

As a magazine editor, I have long felt that the lack of credible and visible Arab style icons is to the detriment of the industry. Abdulaziz agrees that discerning consumers in the Gulf would appreciate more Arab representation in luxury marketing. “Absolutely, without a doubt,” she says, “because that will show that these labels and conglomerates are thinking of these people as peers and not people they look down on. I myself would be interested in seeing a more Middle Eastern face represent Dior or Chanel or even Cartier.”

And while I would love to see Arab actresses tread the Oscars red carpet wearing Chanel couture — alongside Western women in Arab designers, as is increasingly the norm — or an Arab face on a billboard for Dior, the barriers to Arab women entering the field of entertainment remain high, at least in the Gulf, where the notion of fronting an advertising campaign is still taboo, with negative connotations attached to paid endorsements or promotions.

That is not to say that there are no Arab superstars appearing on red carpets or advertising hoardings. Of course there are. But, their personal aesthetic and appeal rarely align with those of luxury fashion houses. The MENA (Middle East and North Africa) region’s entertainment industry, with Egypt serving as the local answer to Hollywood, tends to be polarised towards low-brow mass market celebrities or stars of niche arthouse productions, who often have the taste levels to be embraced by the luxury industry, yet lack any significant recognition to make such a partnership commercially meaningful.

Lebanese superstars such as Nancy Ajram, Elissa and Haifa Wehbe have undeniable appeal, with 8.1 million Instagram followers between them. Yet the dramatic make-up, glitzy eveningwear and lavish hair extensions, along with a propensity for cosmetic intervention, that remains the defining aesthetic amongst this group is an anathema to the natural elegance favoured by Western luxury brands. Stars here will often demand complete control over wardrobe, hair and make-up and creative direction, making it near impossible for luxury fashion publications to negotiate editorial shoots.

Factor in the reluctance of key luxury brands such as Dior, Chanel and Louis Vuitton to loan samples and it is perhaps no surprise that, to date, the only Arab superstar to have appeared on the cover of Harper’s Bazaar Arabia is Lebanese singer Nancy Ajram. Wearing the likes of Alessandra Rich, Gucci and Dolce & Gabbana, I felt that Ajram most closely met the sophistication expected by our readership and commanded by the Harper's Bazaar brand.

To complicate matters, navigating the talent management industry in Lebanon — a hub for the Middle Eastern entertainment industry — is akin to conquering the Wild West, with agents and managers loosely operating from Gmail accounts and doing deals haphazardly. Lebanese actress Razane Jammal, whose 2015 film "Une Histoire De Fou" went to Cannes this summer, only works with management in London, Los Angeles and Paris. Describing the domestic industry as more “happy-go-lucky,” Jammal recalls being offered a role in the Middle East without a formal casting process or even a script. “It reflects in the calibre of the things that they produce,” she says.

Luxury houses are constantly looking for Arab women with whom to partner. Every season, I have the same meetings with the same luxury PRs, trying to identify suitable personality partnerships. In the entertainment field, Louis Vuitton has worked with Lebanese actor and director Nadine Labaki, while Chanel collaborates with the aforementioned Jammal. Burberry welcomes Lebanese television host Raya Abirached — whose programmes Scoop With Raya and Arabs Got Talent have garnered her an Instagram following of over 370,000 — to its catwalk shows. Meanwhile, television presenter Diala Makki juggles brand ambassadorship for Pantene alongside luxury relationships with the likes of Bulgari.

The luxury beauty industry is more advanced in adopting Middle East-targeted marketing, although, up until now, it has harnessed models rather than personalities. Moroccan model Hind Sahli, who has walked for Marc Jacobs and Louis Vuitton, appeared in a 2013 beauty campaign for Estée Lauder in the Middle East, while Tunisian model Hanaa Ben Abdesslem — a onetime Jean-Paul Gaultier haute couture bride and former Harper’s Bazaar Arabia cover star — has fronted campaigns for Lancôme.

Treading a middle ground are brands that work with bloggers and influencers on ad-hoc projects. Chanel has collaborated with Palestinian twins and former Dubai schoolgirls Sama and Haya Abu Khadra, who appear in Karl Lagerfeld and Carine Roitfeld’s "The Little Black Jacket" tome. Louis Vuitton frequently works with influencers such as Bahrain-based Sheikha Dana Mohamed Al Khalifa of The Overdressed blog.

Yet while these collaborations often result in meaningful and engaging editorial, the subjects do not garner the kind of recognition that would merit noteworthy brand ambassadorships, advertising campaigns or luxury magazine covers.

Nonetheless, Abdulaziz believes that the momentum garnered by social media is paving the way for a change in the way that Arab women are willing to be viewed. “I do believe it’s going to shift towards a more Western sensibility,” she says. Increasingly, the new generation does not have the same hang-ups about being photographed that the older generation did. Take, for example, the Kuwait-based blogger Ascia al-Faraj, whose Instagram account @Ascia_AKF has attracted over 1.3 million followers to her interpretation of modern yet modest style, as evidence that attitudes are shifting. Yet for every Ascia, there are plenty of popular contenders for attention whose endorsement may serve to dissuade luxury customers.

Indeed, Abdulaziz cautions fashion houses against partnering with high profile would-be collaborators without doing due diligence. “Not all of the people that have become self-proclaimed stars are necessarily effective, because the client base these labels are trying to target are not the ones that think anything of those people. It’s a catch 22,” she says.

Changes on the horizon

One Dubai-based luxury brand PR, who did not wish to be named, argues that working with well-known, if less credible, names still has a role to play in marketing luxury goods in the region: “There is a slew of new iconic Arab women that will make the paradigm shift. In the interim though, we cannot lose sight of the pop culture references as they are still commercially relevant.”

With more and more Gulf Arab women prepared to move into the spotlight, in five to ten years the luxury marketing landscape in the Gulf could look very different. But in the short term, perhaps the way to reconcile the need for high-net-worth Arab consumers to feel valued and recognised by luxury brands is through considered ambassadorship programmes, such as Giorgio Armani’s partnerships with the likes of Lady Helen Taylor and Eugenia Silva in the early 2000s, which Abdulaziz cites as being particularly effective.

Ultimately, the onus is on luxury brands to form intelligent strategies for targeting wealthy and discreet Arab women. “Companies need to find out who their best Gulf clients are. Find out who is chic out of those clients and take it from there,” she says. Yet, as Abdulazziz concedes, unveiling the chic women of the Gulf is easier said than done. “This is a mysterious part of the world. It’s not like you can just Google things. It’s all a bit more complicated,” she smiles.