The same-sex wedding market is worth $1.04 billion in the US and $192 million in the UK alone. Why have fashion companies been so slow to tap the opportunity it presents?

Over the last 50 years, millions of people across cultures have broken free from traditional wedding formats, adopting a much more diverse range of occasions and ceremonies. But perhaps the most significant shift in the wedding market has been the rise of same-sex weddings. Same-sex unions are now legal in 37 US states, about half of the European Union’s member states and nations including Brazil, Canada and South Africa. They are also big business.

“We have seen an increase of around 25 percent in sales of wedding bands to same-sex couples in our Wonder Room, across brands including Tiffany and Cartier,” said Lucy Willis senior manager of fashion PR at Selfridges.

Out Now Consulting, a marketing agency specialising in targeting gay and lesbian consumers, estimates that if same-sex marriage was legalised in all US states, it would generate over $1 billion of new matrimonial spending within one year. Out Now’s research also revealed that when civil partnerships were legalised in the UK in 2006, the spending impact of lesbian and gay marriages delivered a £130 million ($209 million) boost to the UK economy in the twelve months that followed.

“The wedding market has always been robust. The new market, with the additional of LGBT couples and other underserved groups, turns up the volume to eleven out of ten,” said Kathryn Hamm, president of gayweddings.com, a database of wedding vendors and resources targeting same-sex couples.

And yet, with the exception of Tiffany & Co., whose most recent advertising campaign for engagement jewellery featured a same-sex couple for the first time in the company’s history, when it comes to targeting this burgeoning market, the majority of the fashion industry appears to have cold feet. 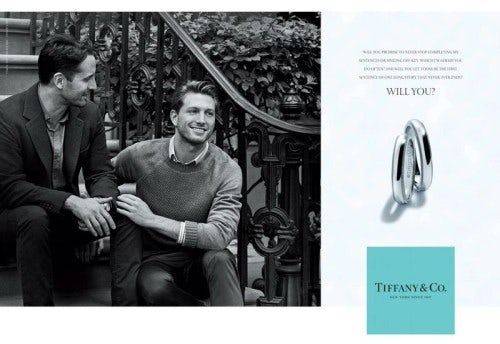 Tiffany’s campaign, titled ‘Will You?’ and photographed by Peter Lindbergh, was lauded as a welcome declaration of support for same-sex weddings, especially as these unions are still illegal in 13 US states. Moreover, it planted the brand’s flagpole with a demographic with high spending power. Unmarried same-sex couples in the United States had an average household income of $103,980, according to data gathered in the latest US Census (2010), with many of these families belonging to the so-called 'DINK' (Double-Income-No-Kids) demographic. In contrast, unmarried heterosexual couples had an average household income of $62,857.

According to a survey by the 14 Stories Gay Wedding Institute, 72 percent of same-sex couples prefer wedding suppliers to have ‘LGBT-inclusive language’ and 69 percent seek suppliers that use LGBT-inclusive photos in their marketing. The same survey also found that 84 percent of gay men and 73 percent of lesbians are paying for their weddings entirely themselves.

“As a single sex retailer we have always specifically catered to the needs of men for whatever occasion,” said Jodie Harrison, editor of The Journal, Mr Porter's online magazine. “However, in our Valentine’s issues of The Journal, we have always featured a gay couple or gay man depending on the theme of the features.”

Similarly, luxury department store chain Barneys New York has made noticeable efforts to represent a more diverse array of consumers in its marketing campaigns. In January, the retailer released a campaign entitled ‘Brothers, Sisters, Sons and Daughters,’ shot by Bruce Weber, which featured 17 transgender models, and coincided with ‘Shop for Equality,’ a day on which Barneys donated 10 percent of its sales to the National Centre for Transgender Equality and the LGBT Community Centre in New York City.

And yet, with the exception of a single article on bridal styles that suggests a Paul Smith suit for “the groom (any groom, two grooms!),” searching for the keyword “wedding” on Barneys.com returns no references to same-sex marriage. The retailer is not alone. 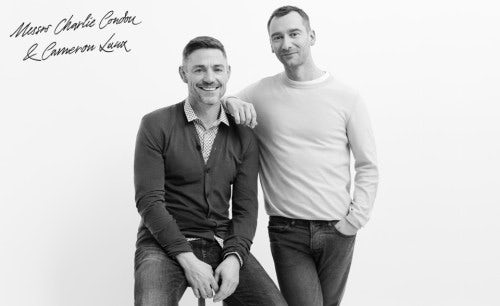 “When we visited Savile Row, as well as brands such as Lanvin and Dolce & Gabbana, the conversation would always start with, ‘Well tradition states that this happened.’ But we are a non-traditional couple,” Walter Badillo, a consumer shopping for his wedding with his same-sex partner, told BoF.

“The shortfall [in our experience] was that we, as a couple, had to decide everything for ourselves, rather than getting advice from someone who knew much more than us, which is important when you are spending a lot of money,” said Badillo. “As double-income-no-kids consumers, we had the money ready to spend, but there wasn’t any customer service to say, ‘Here is what you should do.’ They didn’t have a precedent to advise on how two men’s wedding outfits looked together. They were going just on tradition.”

“In an increasingly competitive market, it's not enough to be ‘gay-friendly,’ one must be ‘gay wedding competent’,” said Kathryn Hamm.

Interestingly, the best service Badillo received came from outside of the traditional western wedding market. He and his partner had planned both a western and an Indian ceremony, and were attired for the Indian ceremony by renowned Indian bridalwear designer Sabyasachi Mukherji.

“Sabyasachi’s service was understated, but he knew exactly what he was trying to do,” Badillo said. “It felt like he was trying to look at us as a pair, and figure out how to place things together. What Sabyasachi was recommending was, even with completely different styles, we could have some corresponding elements which would look nice when standing together.”

In addition to a lack of advice, many brands’ product offering and pricing structure remains somewhat incompatible with same-sex consumers. “Every tailor we visited had a house style. There were some that fit my partner’s body shape and others that fit mine, but it was hard to find one style that fit us both. At most of the brands, there was only one style per price point, which would have meant we would have had to have been dressed the same, or in different quality tuxedos,” continued Badillo.

Some brands, however, have made efforts to expand their product offering to include styles that specifically cater to same-sex consumers. “In the collection we have a great suit which is popular with both straight and gay clientele,” said Sophia Kokosalaki, a London-based bridal designer whose stockists include Browns and Net-A-Porter. “Originally, it was included to serve [the same-sex consumer] but soon we realised that this is perhaps a stereotype. My realisation is that just because the client is a lesbian it does not mean that they necessarily want a masculine outfit.”

The opportunity presented by this market is clear, for brands and retailers who are capable of evolving their offering to cater to a diverse array of couples, rather than either ignoring the idiosyncrasies of same-sex couples, or singling them out through stereotypical product offerings.

Indeed, the moulded icing figures balanced on the top of modern couples’ sky-scraping wedding cakes are crafted in every imaginable combination, colour and creed — the experience of buying what you will wear on the happiest day of your life must be equally diverse.

Editor’s Note: This article was revised on 2 April, 2015. An earlier version of this article misstated that same-sex marriage is legal in Australia. It is not.