The Autumn/Winter 2016 campaign season could represent a notable turning point in the use of digital-native techniques in campaign imagery.

The Autumn/Winter 2016 campaign season could represent a notable turning point in the use of digital-native techniques in campaign imagery.

LONDON, United Kingdom — This season, major brands such as Chanel and Prada bid farewell to staid sophistication and adopted a playful, cut-and-paste aesthetic in their advertising. Continuing in the spirit of the Spring/Summer 2016 campaigns that championed a DIY quality, a number of brands pushed this aesthetic even further towards a new kind of digitally-inspired campaign imagery.

These collage-like campaigns might be a response to the growing popularity of Doug Abrahams and his Instagram feed BessNYC4. Known for repackaging mainstream advertising into visceral counter-cultural collages, Abrahams has become an important bridge between luxury fashion houses and native digital techniques such as splicing and simplistic post-effects. Abrahams has already collaborated with the likes of Givenchy, Courrèges, Marc Jacobs and Adidas Originals and it seems his influence continues to grow.

Without further ado, please enjoy our top 10 campaigns of the season. Which did you like most? Let us know in the comments below. 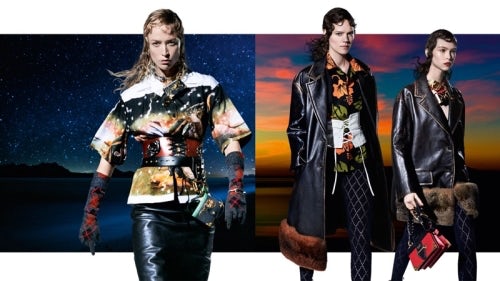 Prada tapped 27 prominent names to feature in its Autumn/Winter 2016 campaign, shot by longtime collaborator Steven Meisel.  This season features longtime Prada muse Sasha Pivovarova, actress Milla Jovovich and rising star Natalie Westling, along with 24 more known-name faces — each marching towards their futures in front of digitally-enhanced landscapes. The flat, computerised perfection of the landscapes that the models are set against, whether starry skies or burning sunrises, forces the viewer to focus on Miuccia Prada’s Autumn/Winter 2016 collection. Described as a “tour de force,” by BoF's Tim Blanks, the collection tackled pressing themes including the polarisation of the rich and the poor, and the imminent threat of mass migration. 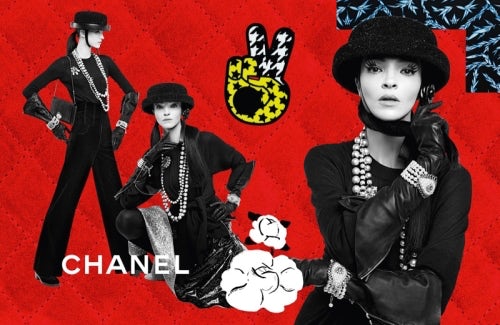 This season, Karl Lagerfeld described his creative vision for the Chanel campaign as “spontaneous,” and spontaneous it is. Signature Chanel motifs, pearls and quilted fabric are interspersed with cut-outs of Mariacarla Boscono and Sarah Brannon. Peace sign emojis and smiley faces appear next to cartoon  camellias and black and white images of the models, creating the pop art aesthetic Lagerfeld incorporates so well with the brand's classic codes. After a one season hiatus, Carine Roitfeld returns to style the campaign. Another new direction for Karl’s Chanel. 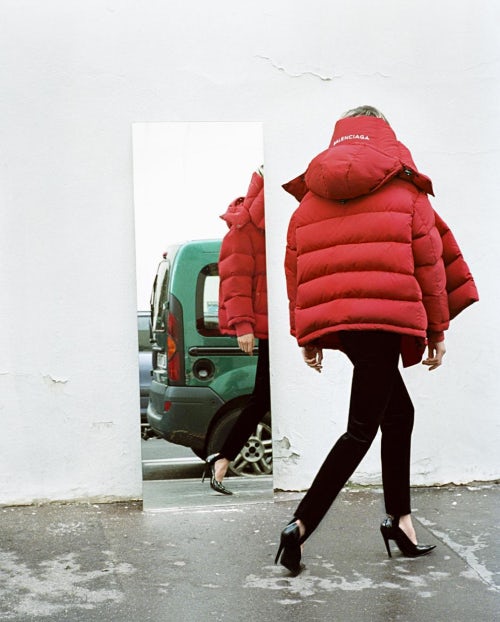 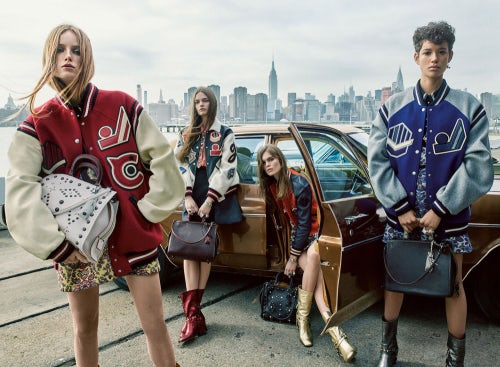 Taking another stride in Coach’s comeback to cool, the brand returns home to mark their territory with the help of longtime collaborator stylist Karl Templer and New York-based art direction agency Baron & Baron. Steven Meisel, who has shot all of the brand's campaigns since creative director Stuart Vevers' debut Autumn/Winter 2014 collection, photographs models such as Rianne Van Rompaey, Jing Wen and Caitie Greene against the Manhattan skyline, frolicking in a Brooklyn car park filled with vintage cars. While Coach has slowly regained market share and financial success in the accessible luxury sector, previous campaigns read as more cautious when compared to this autumn’s confident composition. 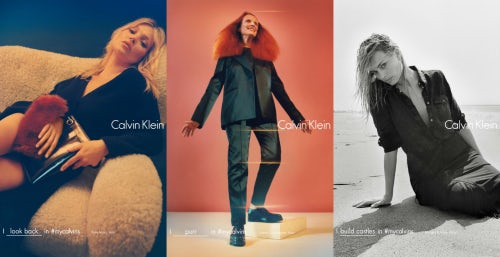 From US Vogue’s creative director-at-large Grace Coddington to Hollywood’s newest darling Margot Robbie, Calvin Klein continued to tap ambassadors from across the entertainment and media industry this season — a testament to the brand’s increasing ubiquity and universal appeal. This season features a more elevated narrative: descriptive fill-in-the-blank captions are layered over intimate images creative directed by Tyrone Lebon, who returns to the brand for the second consecutive season. In recent years, Calvin Klein has taken up a more prominent role in the fashion industry through social media-savvy advertising and clever casting. Within the first four months of their Instagram movement #MyCalvins — which launched in February 2014 — the hashtag garnered 4.5 million interactions, and to date, the Instagram hashtag #MyCalvins has amassed nearly 400,000 images, the majority of which are user-created content. 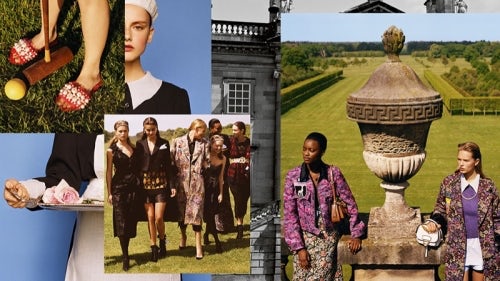 After a string of more subdued, docu-style campaigns, Miu Miu was looking for “24 hour lived-in decadence” this season and chose Houghton Hall — the country seat of the UK’s first prime minister — as its location. The campaign is inspired by the phrase, “any hour for my friends,” which is inscribed on a sundial situated in the grounds of the estate. Styled by Katie Grand, this season features actress Amanda Seyfried and a cast of models including Anna Ewers and Taylor Hill, captured in their revelry by Alasdair McLellan in his debut shoot for the brand. Entitled “Found Narratives,” the campaign follows the cast of characters, including "the Whisperer," "the Player" and "the Ingenue" on a reimagined English country weekend, complete with picnics, croquet and pearl tiaras. 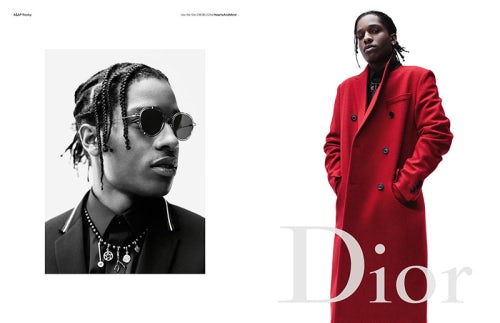 Artistic director Kris Van Assche continues to reinterpret the Dior Homme brand codes, adding his own vocabulary through elevated street style silhouettes and styling. For Autumn/Winter 2016, Van Assche handpicked a selection of  “subversive" ambassadors, in his words, from film director and producer Larry Clark to rapper A$AP Rocky, as well as French actor Rod Paradot and model Dylan Roques. Although Roques was declared by Van Assche as the muse of the season, and walked exclusively for the brand during the last Paris Men’s Fashion Week, the image of A$AP Rocky wearing a vermillion coat, contrasted by Dior’s muted grey branding, is the stand out from the campaign. 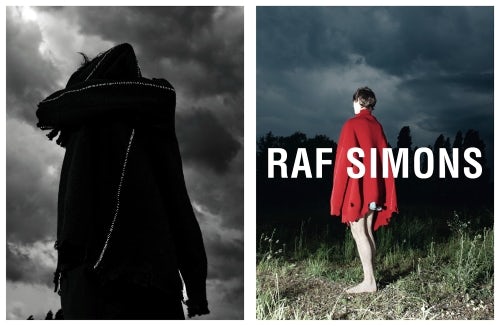 Raf Simons reconnected with his long-term collaborators Willy Vanderperre, Olivier Rizzo and Luca Lemaire (across photography, styling and modelling) to shoot his eponymous label’s Autumn/Winter 2016 campaign. Filled with shadowy introspection, Simons wanted to convey attitudes, memories and visions for the future — as opposed to the garments themselves. Citing a “preppy victim” as the campaign’s inspiration, the images feature Simons' idiosyncratic take on exaggerated American sportswear silhouettes, alongside extremely intimate portraiture of Lemaire. 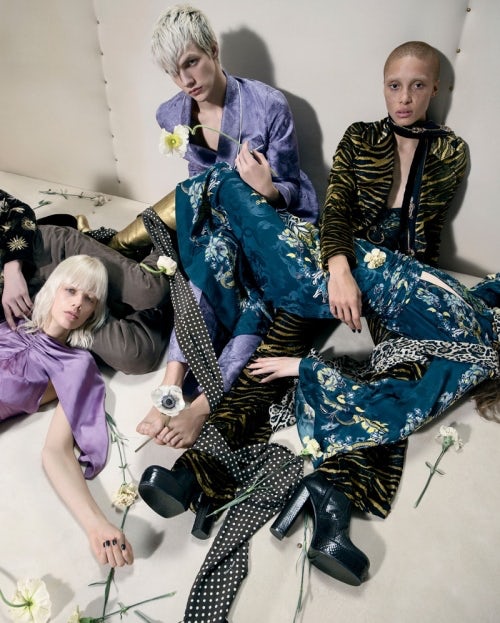 Roberto Cavalli’s second campaign under new creative director Peter Dundas continues the brand’s refinement away from typically sultry and blatantly sensual advertising, starring famous faces including Nicki Minaj. This season, Dundas injected a sense of romance and youth culture into the campaign, commissioning British photographer Tim Walker, best known for his on-location editorial shoots that play with allegory and fantasy, and Ellie Grace Cumming, who began her career as Alister Mackie's assistant. The campaign features models Erik van Gils and Adwoa Aboah, lounging in a blissed-out reverie, clad in fluid silks and crushed velvet. There is a new kind of sexy at Cavalli. 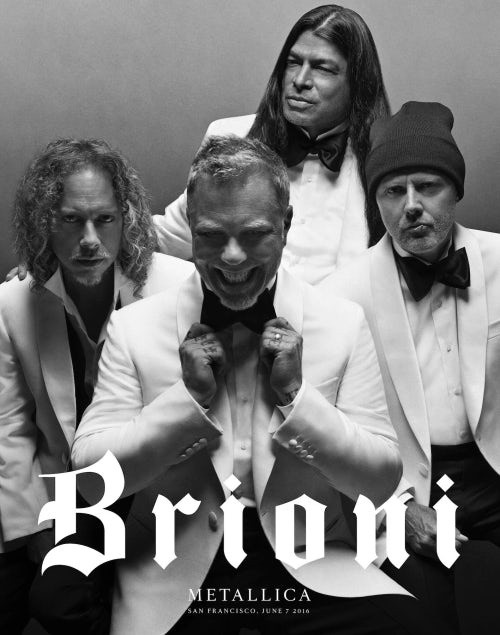 In his first campaign for Brioni as its new creative director, Justin O’Shea gave the classic brand a rock-and-roll facelift by casting Metallica and referencing Queen’s Bohemian Rhapsody cover composition. Shot by Zackery Michael, the black and white images feature Metallica’s James Hetfield, Lars Ulrich, Kirk Hammett and Robert Trujillo in both group and individual images, suiting up in white formal dinner jackets, bow ties and sunglasses. O’Shea’s radical creative vision has realigned the Italian brand along strictly masculine and mature lines. Surprisingly, the gothic typeface used across the bottom of the images is a reinterpretation of Brioni’s original logo when it was founded in 1945.

Editor's Note: This article was amended on 25th July, 2016. A previous version of this article misstated that Steven Meisel had taken a hiatus from shooting Coach's campaign last season. This was incorrect. Meisel has shot all of the brand's campaigns since creative director Stuart Vevers' debut Autumn/Winter 2014 collection.