LONDON, United Kingdom — While the notion of seasons is becoming more fluid than ever, seasonal advertising campaigns remain an important part of fashion’s marketing arsenal, even if they are now more calculated for Instagram than the pages of print magazines.

Other success stories include this season’s Juergen Teller-lensed campaign for Céline as well as David Luraschi’s striking imagery for Jacquemus, which cast the label in a newly mature light, and Annie Leibovitz’s trompe-l'œil campaign for Moncler, featuring Chinese performance artist Liu Bolin.

Below is our selection of the Top 10 Campaigns of the Season. Let us know your thoughts in the comments below.

Under the creative vision of Raf Simons, the legendary American label is redefined in advertising with this season’s campaigns, shot by long-time collaborator Willy Vanderperre. A break from the celebrity-driven advertisements of yesterday (#mycalvins on the likes of Kendall Jenner and Bella Hadid), Vanderperre explores and reinterprets what it means to be an American altogether through his lens. Featuring the cast of Moonlight, Simons’ new Calvin Klein celebrates black artistry, shifting the approach away from harvesting numbers on Instagram. 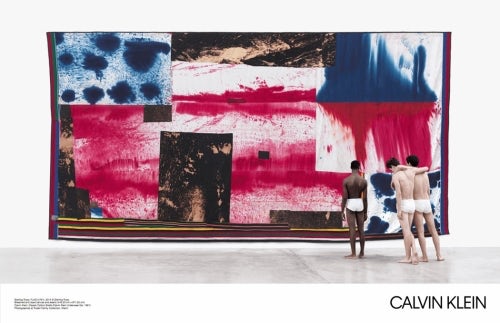 These are the so-called American Classics: white men’s briefs and denim jeans. In contrast, by juxtaposing these classic pieces in front of the works of American artists like Sterling Ruby, Richard Prince and Andy Warhol, Simons positions the products as art — acknowledging their significance to and the roles they play in American popular culture altogether. 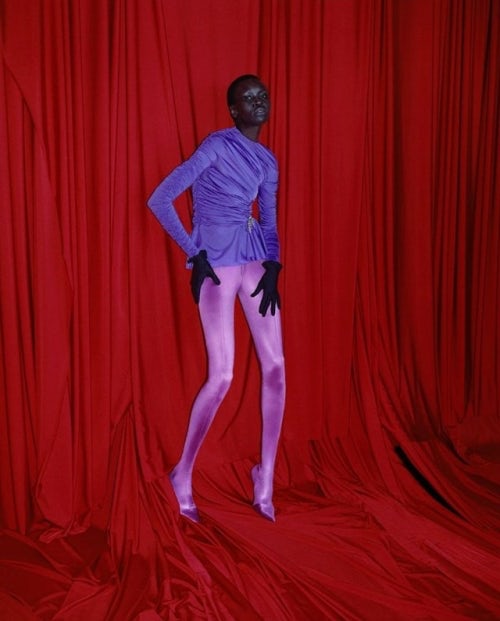 Campaign images face the arduous challenge of conveying an entire season of clothes — from the designer’s inspirations to the attitude of the collection — in a few still images. In this respect, Weir’s campaign for Balenciaga this season was in perfect harmony with the clothes. While the garments themselves explored the theoretical aspects of fetishism, Weir’s photographs are in themselves variations on this fetishistic theme. Featuring the likes of Alek Wek, Shujing Zhou and Eliza Douglas (three models who walked in the show), this season’s campaign felt like a natural extension from the runway. Reminiscent of the Red Room from David Lynch’s cult '90's television series "Twin Peaks" — which has become a staple for the Tumblr generation — the background is eerily ominous, giving viewers a strange sense of discomfort much like a Lynchian mise en scène. 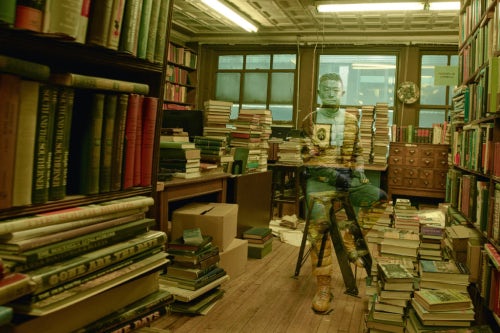 The odd one of the batch, the campaign, shot by Annie Leibovitz, features no ‘it’ models. In their place is Chinese performance artist Liu Bolin, who, adorned in Moncler, is painted entirely to blend into the background — a continuation of his previous body of work. Diverging from the traditional fashion editorial, Moncler’s campaign this season focuses not on the clothes but Liu himself, who, nicknamed "the Invisible Man," obscures himself by painting to camouflage completely. Liu’s work is not only artistic, but a sociopolitical critique of his native China. As Liu says, “The collaboration with Moncler shows my intention of inviting individuals to experience and to contemplate art in everyday life. As we stand at the intersection of the post-industrial and virtual age, the interrelationship among modern technology, man-made landscapes and human beings themselves has become the point of departure in my works.” By tapping into this creative endeavour, Moncler distances itself from fashion and strives to elevate itself into the realm of contemporary art that is both culturally and politically minded. 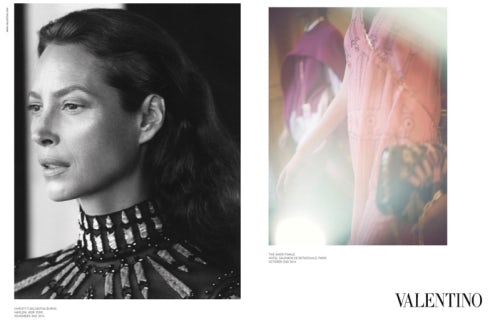 To call Christy Turlington Valentino’s new muse is somewhat of a misnomer: Turlington starred in several Valentino campaigns in the 1990s, making her reappearance in Pierpaolo Piccioli’s first solo campaign with Valentino is an exercise in melancholic nostalgia. The wrinkles on her face are intentionally unfiltered; left untouched, to be seen, the imagery plays with the notion of time and our grasp of it. Shot by David Sims, the series is deeply introspective in its intimacy, and carries a delicate, poignant tone of sadness. The faces of the models are contrasted with the fleeting images of the clothes, giving it a sense of ephemerality. Portraits of Liya Kebede and Ratner, featuring the models staring directly into the camera, underscore the campaigns impactful intimacy. 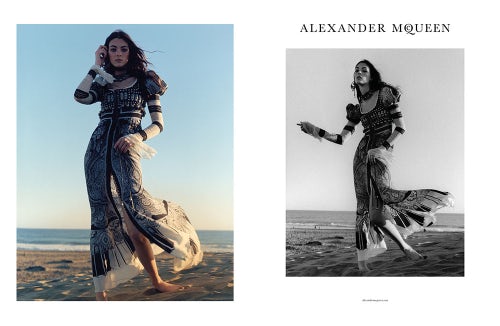 Alexander McQueen once again enlisted British photographer Jamie Hawkesworth for its Spring/Summer 2017 campaign. Starring rising model Vittoria Ceretti, it is set in an infinity sand and sea, populated only by Ceretti and rolling sand dunes. Ceretti, surrounded by footprints in the sands, appears as a fleeting figure. As the sun shifts, so too does she. The collection was inspired by the Scottish Highlands and Britain's Jurassic coast as a tribute to Lee McQueen’s ancestry. The crashing waves of the Atlantic coast represented in Sarah Burton's designs contrast the pristine sand-scape of undulating dunes. This delicate exercise in contrast between the clothes and the mise-en-scéne synergistically brings out the beauty in each.

6. Dior — starring Ruth and May Bell, shot by Brigitte Lacombe 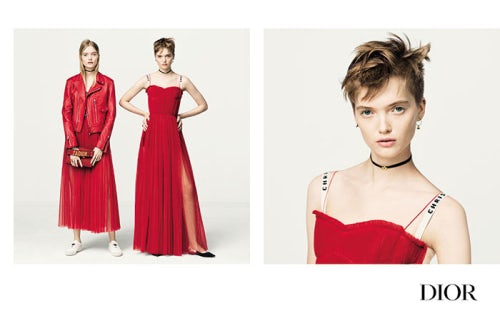 When Dior’s first female artistic director Maria Grazia Chiuri debuted her work for the historic house on the Parisian runways for Spring/Summer 2017, a statement t-shirt declared that "We should all be feminists." The line, lifted from the title of an essay written by Chimamanda Ngozi Adichie, a black feminist writer from Nigeria, has somewhat set the tone for Chiuri’s tenure to date. For this season’s campaign, shot by Brigitte Lacombe, Dior plays with the idea of sisterhood starring Ruth and May Bell. In her essay, Adichie writes, “[W]e do a much greater disservice to girls, because we raise them to cater to the fragile egos of males: we teach girls to shrink themselves, to make themselves smaller." The campaign — where a woman photographs two women wearing clothes designed by another woman — is just one of the many ways that Chiuri thinks we can be feminists. 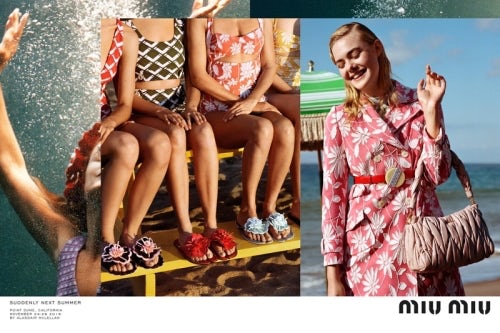 This season’s Miu Miu campaign, shot by Alasdair McLellan, successfully utilises a bordered diptych format to capture the essence of summer and the blithe spirit of Miu Miu. Featuring brand favourites like actress Elle Fanning, alongside established models names such as Carolyn Murphy and Lara Stone, McLellan invokes the traditional signs of summer in a mid-20th century tone. The models are on the beach, next to the calm ocean; wearing flowers on their heads as a radiant sun shines down from above. If Miu Miu is supposed to be the naïve counterpart to a sophisticated Prada, as Mrs Prada herself has once said, then this campaign speaks to the raison d’être behind the entire brand, in addition to this season's collection. 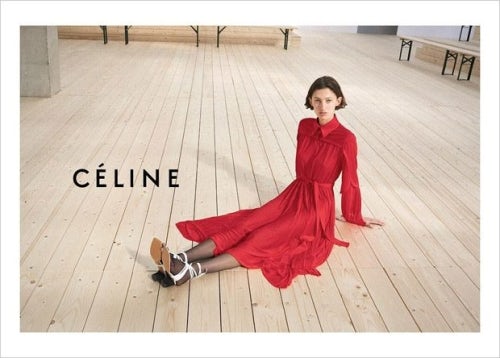 The longstanding creative partnership between Phoebe Philo and photographer Juergen Teller needs no introduction. Indeed, it seems like a Céline campaign shot by Teller is the surest thing each season. Up against the monotonous background, Philo’s collection becomes the focal point of the images. Of course Teller, after so many seasons, knows exactly what to do to, but it remains impressive that the variations on a theme continue to be so visually stimulating. Over the years, Teller's lens has come to play a significant role in crafting the archetypical Céline woman; his imagery augmenting Philo's sophisticated yet challenging aesthetic through his stark and impactful composition. 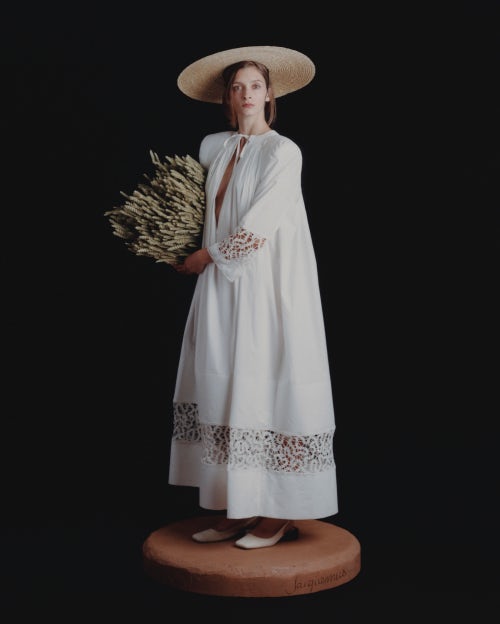 Photographed by David Luraschi under the artistic direction of designer Simon Porte Jacquemus, the striking campaign image of a model cast as a figurine creates a sense of isolation, idealising the subject. On the base, "Jacquemus" is etched in cursive handwriting. The campaign shows the brand in a mature and thoughtful light in the newest stage of its evolution, as it comes to confront its own identity in a bold statement of intent. 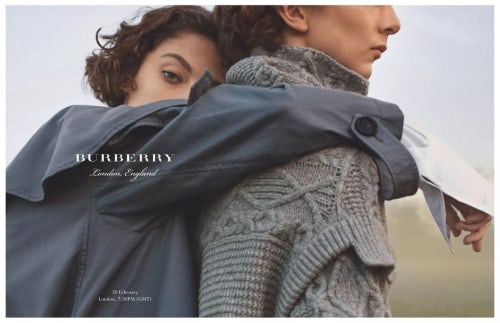 Shot on location in Hertfordshire, the campaign cleverly combines a contemplative reflection on the brand’s British heritage, featuring England's lush, rolling landscape and an acknowledgement of the brand's commercial restructuring to fashion immediacy by the inclusion of the date of the show (and thus the drop date of the collection). To shoot his Henry Moore inspired Autumn 2017 collection, Christopher Bailey tapped British photographer Josh Olins, representing a break from the brand's established creative format, which began in 2008 when Mario Testino was commissioned and ran until last season.