PARIS, France — 3D printing was born in the 1980s and has long been used for “rapid prototyping.” Now, the technology is accelerating exponentially and being employed to manufacture finished products, including fashion and luxury goods. Several reasons explain this acceleration, from the expiry of relevant patents to progress in materials science and software. Today, it is easy to scan an object, turning atoms into bits, and then print it out, turning those bits back into atoms. Digital design has also advanced by leaps and bounds.

From the moment we, as children, proudly make sand castles, we are accustomed to subtractive manufacturing, whereby a mould is filled to create an object. 3D printing is the opposite: additive manufacturing, where very fine layers of material are superimposed according to a digital design to the point where they end up building a distinct object.

The three main technologies here are FDM (Fused Deposition Modelling), where an extrusion nozzle deposits layers of melted filaments one after the other, in the manner of Italian ice cream, except that the temperature is around 200 degrees Celsius. FDM is the most commonly known method. The second method is stereolithography (SLA), where a polymer liquid deposited into a tray solidifies, again layer by layer, under the effect of a light radiated by an ultra-violet laser that sweeps the surface. The third technology is the sintering of powders (SLS), which consists of heating them again via a laser source, so as to agglomerate them by depositing successive layers on a platform.

3D printing is nothing short of a new industrial revolution that holds potential for major innovation of economic models.

In fashion and luxury, the most appropriate technologies are stereolithography, which enables the best surface treatment but also leads to a certain fragility in the object, and power sintering, which benefits from better mechanical properties. Generally speaking, 3D printing is better suited to hard materials over soft materials and geometrical shapes over organic shapes. This is why the luxury categories where the technology is most widespread are jewellery, eyewear and watchmaking. 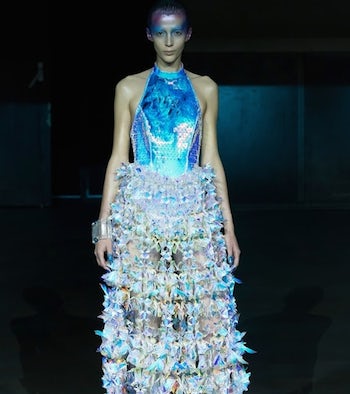 Although traditional weaving and knitting are themselves additive technologies, the use of 3D printing in garment fashion is also moving ahead. Here 3D printing can be used for rigid structures meant to adorn a garment. But soft materials, including embroidery and lace, can also be developed by using TPU (thermoplastic polyurethane) and other polymers such as polyamide. As for fashion designers, Iris van Herpen has paved the way, followed by designers such as Yuima Nakazato, who, this season, presented fashion composed of incandescent origami objects linked together via 3D printing. And the future is even more promising as new technologies are emerging, making it possible to print seamless garments or mix materials. It is also conceivable to imagine machines that combine weaving and 3D printing.

3D printing also has implications for shoes and bags, including buckles, of course, but going far beyond this. Major sports brands as well as start-ups have propelled innovation in the space, from 3D-printed soles perfectly moulded to an athlete’s foot to customised bags, often combining techniques both traditional and new, as well as both natural and synthetic materials.

Make no mistake, 3D printing is nothing short of a new industrial revolution that also holds potential for major innovation in terms of economic models, not least via on-demand production. Having said that, copying is also easier and intellectual property is one of the biggest challenges to surmount. How can a Rodin sculpture and its identical reproduction be distinguished?

Besides, we must however not lose sight of the problem of productivity linked to the time spent making the object: 3D printing a sophisticated object of just a few cubic centimetres can take hours! Reducing printing time is therefore a major factor in the growth of the technology, but progress is encouraging.

Sustainability must also be better integrated into the evolution of the technology. 3D printing enables substantial savings in materials and can radically reduce carbon, by making freight transport obsolete because objects can be created on site. But, on the other hand, there are issues with the recycling of unused powder and more research is required on the use of very high temperatures in the solidification process of materials.

3D printing undoubtedly puts more power in the hands of consumers, who can play a bigger role in the design and realisation of their products. But up to what point? To make one’s own objects is cool and 3D printing is a highly significant innovation for the maker movement. But in fashion and luxury, this has its limits. Fashion is Balzac’s “hieroglyphed man,” where the act of buying is linked to the meaning contained in a brand or designer’s point of view. Besides, while it is easy to print a basic resin bracelet, it is much more complex to create a sophisticated luxury product. But it’s not impossible to imagine brands offering their clients the option of making simple products within certain parameters.

Indeed, perhaps most of all, 3D printing will facilitate differentiation and customisation, enriching the dialogue between the consumer and the designer and giving rise to a wider range of goods than ever before.

Chris Anderson Says the 'Maker' Movement is the Next Industrial Revolution