NEW YORK, United States — From micro-influencers to the Kardashians, brands have a wide range of potential partners for their influencer marketing campaigns. So, who really delivers return on investment?

Google “influencer marketing” and you’ll find hundreds of third-party services offering to find you an influencer and measure the success of your campaign. Yet many fashion brands are still operating in the dark.

“The talent has all of the power,” says Brittany Hennessy, an influencer marketing expert who oversees influencer relations for media giant Hearst and is the author of the forthcoming book “Influencer.” “Brands feel so powerless. They took too long. They could have made the rules.”

“Brands overpay influencers,” continues Hennessy. A big reason for this is that agents and influencers often price based on follower count rather than engagement, which encourages influencers to buy followers. Also, top-tier influencers, like Arielle Noa Charnas aka Something Navy, who are known to actually move a lot of product, can command higher rates that then set the standard for their category. “But they are absolutely the exception,” adds Hennessy. “There are very few girls worth that type of money.”

The bottom line is: a brand that’s not prepared to invest time and money to study the space is setting itself up for failure in an influencer economy that is very much the Wild West. Labels must typically wade through a lot of bad influencers and third-party tracking services to create an effective strategy. They also have to set realistic expectations around what their influencer spend will actually achieve (hint: it usually isn’t a massive volume of sales).

A lot of brands are unclear about what, exactly, they’re paying for. A micro-influencer might charge a few thousand dollars for a post, while a top-tier influencer might charge tens of thousands. Baked into that price are both the costs of content production and content distribution. A good influencer will be transparent about how much they need for each, argues Hennessy.

A brand that’s not prepared to invest time and money to study the space is setting itself up for failure.

And though some influencers are happy to share data with brands about their audience demographics and campaign performance, not all are. If an influencer isn’t forthcoming about pricing or success metrics, it’s likely they have something to hide, like fake followers, which can help drive down prices.

This is where third-party analytics tools are not just handy but essential. Even a savvy consumer of Instagram might look at an influencer’s account and not realize that half of her following is fake. Yet, the cottage industry in data tracking that has sprouted up around the influencer economy can be equally overwhelming. Experts interviewed for this story cited Tagger, Lumanu, Dovetail and Socialite as some of the best data analytics tools.

At a very basic level, analytics tools should be able to show marketers if an influencer has a high-quality following. Lumanu, which is known for sophisticated software that allow brands to pay to boost campaigns to a targeted demographic, can provide a page like the below on each influencer. 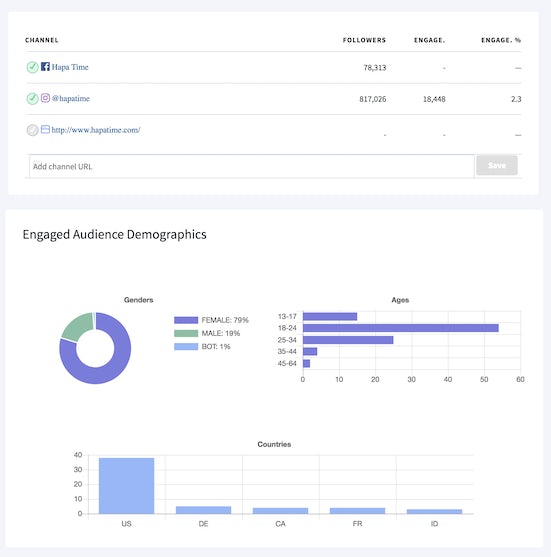 You can see from the above screenshot that this is a pretty high-quality influencer for a few reasons: her bot following is small at 1 percent; she has a lot of engaged followers in the US; and she mostly appeals to young women. Also, her engagement rate is 2.3 percent.

“Between 2 and 4 percent is really, really good,” said Mike Sorgenfrei, the founder of AdMass and NudgeTV who is also a marketing consultant. But engagement is also relative to someone’s total following: “If you're at half a percent and you're not Kim Kardashian, that's not a good influencer.”

Lumanu also tracks a number of stats regarding how well each post in a campaign performed, enabling brands to see what kinds of photos people like (for instance, an image of an influencer with a dog might notably outperform the 49 other influencers participating in the same campaign) and how well each influencer converts. Using Lumanu, one can see that a fashion brand sold more product by running a campaign with @TheMATimes, who has just 29,000 followers, than with a campaign with a well-known fashion influencer with more than 800,000 followers. While there’s plenty of debate about the value of micro-influencers (defined loosely as someone with 15,000 to 100,000 followers), many experts think they are valuable in aggregate.

Sorgenfrei, for one, thinks brands get more value from using hundreds of micro-influencers than spending the same amount of money on one post from a Kardashian. As most influencers don’t drive high sales volumes, brands are really using them for brand awareness and awareness requires repetition.

“I’m very transparent and very clear and say, ‘Just because something goes on Instagram that doesn’t mean you’re going to get a million dollars in sales,’” explained Sai Da Silva, an influencer with 318,000 Instagram followers who works with Godiva, Furla and H&M. “It’s a different way to advertise. We used to put all of our budgets into commercials but no one watches TV anymore. Now, you’re putting product placement on digital.”