Gripped by the 'lethal' blend of marketing and design as perfected by Slimane's Saint Laurent, Paris was largely devoid of fresh style statements, says Angelo Flaccavento.

Gripped by the 'lethal' blend of marketing and design as perfected by Slimane's Saint Laurent, Paris was largely devoid of fresh style statements, says Angelo Flaccavento.

PARIS, France — The men's fashion week that closed in Paris yesterday was rather flat and predictable. It lacked both the sudden highs and the miserable, yet sometimes inspiring, lows that mark the kind of exciting fashion week we expect from Paris — after the commerciality and accessibility of Milan.

Not this time around. The continuity between the fashion offering in the two cities was striking in its greyness. Nowadays, everything looks almost the same whichever fashion hemisphere you are in. Designers rely on the same trend forecasters; they hire the same stylists as consultants; they rent vintage pieces from the same places and shop for vintage originals in the same thrift stores — to find their so-called inspiration.

Today, when designers find an unmistakable signature or a best-selling trick, they repeat it ad nauseam in order to cut a lasting dent in the imaginations of consumers, making them faithful to the cause. The presence of a camouflage pattern in a Valentino collection is just one example of this lethal but profitable merging of marketing and design that's shaping fashion at the moment. All of this featured prominently in Paris, where not a fresh style statement was delivered, apart from Sacai's hyper “hybrid” and Hood by Air's club kid extravaganza. 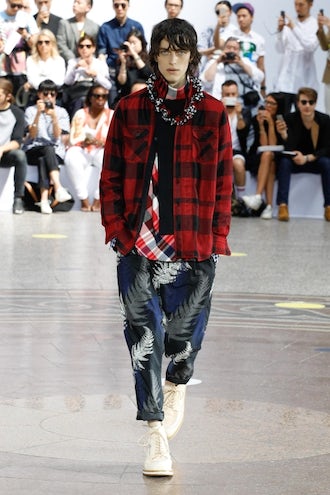 Pushed by tighter and tighter deadlines, no time is left for designers to complete truly creative research of the kind that translates into an original line-up of clothes. The result is plain to see: telling one collection from another is not always easy, the identity of each outing lying in the power of the brand communication more than the peculiar charm of the items per se. Was Maison Margiela’a counterintuitive take on tailoring, for instance, something truly Margiela, or just a nondescript exercise in apparent edginess? You decide. And what about the mash-up of all possible references at Ami, streamlined to form a perfect wardrobe whose ultimate exactitude was also its indisputable banality? The notion of authorship, a founding one for designer fashion, which more or less is an auteur’s view made ready for industrial serialisation, keeps being blurred and obliterated. This unstoppable drive towards homogeneity is made even more striking by the current obsession with individualism. The more designers delve into the clichés of being a stray cat or an outcast, the more they all act in the same way.

That said, clothes-wise and generally speaking, this season Paris was all about lightness, functionality and practicality: think parachute fabrics, pull tags, outsized pockets and a pervasive early Marithè and Francois Girbaud and Massimo Osti undercurrent. It was all rather obvious, most of the time (see Kenzo). In a collection such as Ann Demeulemeester, however, the detour around the notion of transparency — a perilous affair, when it comes to menswear — got positively sensual and innovative. 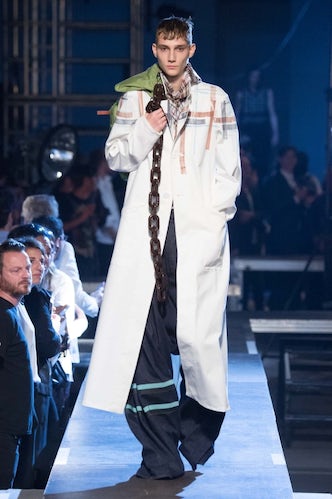 Silhouettes-wise, the influence of a true original like Raf Simons is indisputable: his vertical line ending in the widest of trousers — something Simons has been carrying on since his debut in the 90s — was replicated almost everywhere, yet without the same subcultural tingle, even reaching, for instance, the dry and slightly soulless shores of Dior Homme.

Talking about clothes, however, feels quite old these days. It feels so trade too. Fashion, at least in the view of this writer, has turned into just another arm of the global entertainment industry. In fact, the shows that we keep seeing are as much about the attitude as they are about garments: welcome to the era of total styling. In this way, this season everybody wanted to do a Hedi — as in Hedi Slimane for Saint Laurent. Everybody wants to grasp a whiff of underground rock and instil it into their collections in order to make them appealing. They want to turn the raw energy of the street into an attractive patina. Most of all, they want to catch that volatility of youthfulness and cash in on it. Which is all what Hedi Slimane, does so well. He does it forcibly, of course, and with a zeal so studious that it erases any spontaneity, but with such remarkable intensity it translates into commercial success.

Slimane as a designer has not invented anything — but he owns a style as his latest outing, another glimmering clash of alternative clichés, from So-Cal punk to Kurt Cobain grunge, proved so well. Slimane has glorified and crystallized the coolness of passing youth and made it the peak of fashion desirability. It is safe to say that any cool kid worth his salt can replicate the look in a thrift store at a fraction of the price and with ten times the energy. The wealthy, slightly lazier and oftentimes middle-aged Saint Laurent customer, on the contrary, can have it, with a name on the tag that is synonymous with fashion history, in any boutique, with the swipe of a platinum credit card. They will have a mise-en-scene, that's for sure, but in this time of permanent fiction, this is no surprise at all.

The genius of Slimane is his ability to renew fashion's intrinsic fascination with youth and personality: at Saint Laurent, he keeps selling the dream of being cool and young forever. He is also selling, in the same package, the dream of unabashed individuality, the thrill of sexual ambiguity, the charm of difference, in such a straightforward, un-nuanced way, one cannot avoid getting the message. This, despite the similarities of method, is the main difference between Slimane and Gucci's Alessandro Michele, whose taste translates into a foggier, brainier formula. And this is what makes Slimane fashion's prime mover of the moment, whether you like it or not. When even a seasoned master such as Paul Smith heads straight into alt rock territory, when Lanvin's brand of languid masculinity and Haider Ackermans's take on sensual decadence are distorted into a hard, punkish riff, you just have to acknowledge the influence.

You also have to acknowledge the minuses. With its jumbled amassment of haphazard styles worn by a bunch of different characters, Slimane’s Saint Laurent shows have generated the trend of non-narrative, individualistic collections, which is, in fact, a wonderful excuse to brutally bring product to the fore. Sometimes, it is all so blatant and rude that any fascination gets lost. Which brings us to the bittersweet conclusion. In order to truly progress, fashion must find a balance between innovative shapes and challenging attitudes. Without the first, in the long run, the second will vanish — soon. I bet Hedi knows this, too.