Scarcely a good word has been written about the ambitious proposals for the Hackney Fashion Hub, a major luxury retail development planned for a riot-scarred East London neighbourhood, which is also home to The Trampery's new fashion-focused shared workspace location. 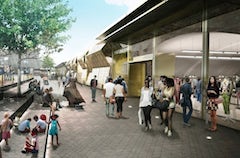 Designed by trendy architect David Adjaye, the plans for the £100 million (about $155 million) development put forward by the Manhattan Loft Corporation and Chatham Works comprise 6,250 square metres of retail space as well as subsidised design studios for up-and-coming local designers. The developers also promise 450 retail jobs for locals, a pedestrian area with cafés and free business advice for fashion start-ups.

The first this reporter heard of the Hub was an invitation to sign a Change.org petition protesting its existence on Facebook, and a quick search on Google brought up a chorus of naysayers. Negative reviewers have latched onto Burberry’s long-existing presence next to the proposed development site and drawn their own conclusions about the project, painting an unflattering picture of busloads of tourists arriving at a bland shrine to discounted luxury goods, filling up on labels and leaving without investigating, or investing in, the local area.

Critics asserted that the development would not help alleviate poverty in Hackney, a borough acutely affected by the London riots of August 2011, and to the contrary, would only underscore the divide between rich and poor. Key to this argument is the fact that £2 million of the £70 million post-riot redevelopment fund has been allocated to the project by the Greater London Authority. The slogan of the petition was “Community not Consumerism.”

It was hard to equate the positive, industrious conotation of the word "Hub" with what appeared to be a fundamentally commercial project containing a number of small concessions to local interests in order to obtain approval from local government. And given that luxury labels usually situate their discount stores far from their glossy flagships, so as not to damage the lustre of their brands, it seemed odd to feature the work of young designers, whose appeal often lies in their rarity, newness and originality, alongside last season's big brand bargains. Would the status conscious shoppers who are predicted to arrive in coaches to buy sacks of Burberry want to buy new, possibly unknown labels? It seemed unlikely.

But on closer inspection, it’s become clear that the project’s poor public relations effort has allowed this unfavourable impression to spread and that the pioneering potential of the Hackney Fashion Hub lies hidden under a bushel. While the architect’s name, David Adjaye, had been an important part of the Hackney Fashion Hub’s communications campaign, it was only after some investigation that the name of the project’s fashion director, Caren Downie surfaced.

Ms Downie is a fashion heavyweight who spent almost a decade as buying director at Topshop where she was integral to developing the company’s involvement with London Fashion Week’s much-imitated and highly successful NewGen programme, which has sponsored new designers such as Christopher Kane, Roksanda Ilincic, Peter Pilotto and Meadham Kirchoff.

The choice of Downie, a woman with significant experience in nurturing design talent as well as curating a dynamic mix of brands through her work at ASOS, where she was fashion director until October 2012, during key years of the company's expansion, cast the whole project in a new light — one that takes fashion seriously.

“My role is to curate a diverse mix of brands across a range of prices, including streetwear brands for example, and to support and mentor young creatives. We want this to be a really pioneering project, not another Bicester Village, and we don’t want to lose the identity and unique appeal of Hackney” she told BoF.

Downie has already worked with many of designers who live in Hackney through the The Hackney Shop, a space on the same street as the Hub where designers who reside in the borough can have the shop free of charge for a week. Participants have included Jonathan Saunders, Roksanda Ilincic, and Holly Fulton among others, and many apparently responded positively to approaches to potentially participate in the Fashion Hub.

Holly Fulton gave her take on the plans with enthusiasm: “It makes complete sense. It was brilliant to have the Hackney Shop on the doorstep of the studios before, and the Hub would provide business advice, which is so useful when starting a label, especially as many designers aren’t that well informed about the commercial aspects, and the temporary retail spaces would create the chance to introduce our label to a new audience and generate cash flow. The project is capitalising on fashion in a good way.”

Labour MP Meg Hillier, in whose constituency the Hub would fall, wants the planned project to bring more people to the area: “Many local shops fear that Westfield in Stratford is drawing shoppers away from the Hackney, and much of the spending here is transactional — banking and using the post office. The plans will hopefully cause people to spend more time in the area.”

Those involved with project seem to be serious about using fashion for social regeneration with plans that extend far beyond retail. Downie described its scope: “We want to regenerate Hackney’s textile manufacturing history,” she stated. “We want to create jobs and opportunities throughout the whole creative process, from designing to manufacturing, to retail.” The developers are working with the Hackney Council's “Ways into Work” scheme to train local residents to work in retail and project that at least 450 jobs will be created by the project.

“A third of Hackney residents in the last census were under 24 and many are desperately keen for these jobs. The Fashion Hub will also provide many ancillary jobs too. My role is to keep hold the developers’ feet to the fire to push for retailers provide skills training for locals,” said Hillier.

There is precedent for this kind of project working.  Most of the sales staff at the nearby Aquascutum outlet are local residents and have worked there since it opened. Phillip Harrison recently spoke up about his experience of working at Aquascutum: “I had been in receipt of [government-sponsored] benefit for three years. I was very disheartened in most aspects of my life. I had lost all of my ambition, and then through Ways into Work, I found a full time job with a high-end fashion retailer, which is near my home… I have my general hunger back to achieve things in life.”

On the manufacturing side, Hackney's planning councillors are in dialogue with Fashion Enter, the not-for-profit that already runs a successful training scheme in Haringay called “The Stitching Academy,” which trains people in skilled garment manufacture, and has a factory that produces 7,000 garments per week for ASOS.

“People say you can’t manufacture in bulk in the UK,” said Jenny Holloway Fashion Entry’s CEO, “but that’s rubbish. We have a strong, tried-and-tested model that incorporates commercial application with social enterprise.” And this is something that they hope to replicate in Hackney: “We want to emulate the Haringay scheme in Hackney to train people in the skills they need for garment manufacture and produce small runs of clothing for young designers and make adjustments,” she added.

The London College of Fashion, which has a site in Hackney very near the proposed Hub, is also working with the developers on providing business advice and workshops for fledgling designer and brands.

Rather than a crass commerical project, the plans for the proposed Hackney Fashion Hub could potentially unite the borough's rich design culture, its manufacturing history and existing schemes that subsidise studio space for young fashion designers for overall social and economic good.

The land has been bought, the plans have been refined and the final planning meeting for the project will take place in October. If the developers don’t give in to purely commercial concerns and hold true to the rather promising plans they have put forward, the Hackney Fashion Hub could harness the business of fashion for genuine social and economic regeneration.