Charles Jeffrey Gets Down to Business

Ahead of his show this Saturday at London’s Fashion Week Men’s, the designer talks exclusively to Tim Blanks about the next chapter of his Loverboy label. 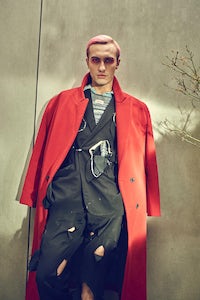 Charles Jeffrey Gets Down to Business

Ahead of his show this Saturday at London’s Fashion Week Men’s, the designer talks exclusively to Tim Blanks about the next chapter of his Loverboy label.

LONDON, United Kingdom — Guests should already have received their invitation to Charles Jeffrey’s Loverboy show on Saturday. Perhaps they’ll recognise the huge solitary figure on the paper fold-out as Caspar David Friedrich’s “Wanderer Above the Sea of Fog,” one of the most powerful images of 19th-century Romanticism. There’s less chance they’ll clock the quote re-printed on the invitation: “We all have forests on our minds. Forests unexplored, unending. Each one of us gets lost in the forest, every night, alone.” It’s from “The Wind’s Twelve Quarters,” a collection of short stories by Ursula Le Guin, whose combination of “speculative fiction” (a.k.a. sci-fi), feminism and Carl Jung turned her into a literary living legend before her death in 2018.

Pardon the windy preamble. It’s my way of letting you know that Charles Jeffrey is going deep this season. Or maybe it’s just a reminder that he’s actually been that way all along, since British fashion’s fairy godmother Lulu Kennedy introduced him to the London catwalk nine seasons ago. Then, he was the Pied Piper of an extravagantly polymorphous East End club scene. Loverboy was Jeffrey’s monthly night at Vogue Fabrics. Like all its fabulous forerunners — Blitz, Taboo, Kinky Gerlinky, Nag Nag Nag, Boombox, Ponystep — it spawned an entire scene, DJs, artists, fashion babies… and Loverboy The Label.

Jeffrey was a sponge during those heady years, soaking up inspiration from the excess all around him. The club was as much of a laboratory for him as the concentrated calm of an atelier would have been for a classic couturier. And his shows were a chaotic extemporisation of life on Loverboy’s dancefloor.

We’re stepping into more global territory; our audience has tripled in the last year.

But much more besides. The paganism, the physicality of the fashion rituals being staged by the designer — and such collaborators as creative director Theo Adams and set designer Gary Card — were so thrilling that you could occasionally miss the craft beneath the chaos. While Jeffrey was club-running, he was completing an MA in menswear at Central Saint Martins, under the life-changing tutelage of Louise Wilson (though she died before he finished the course).

He also interned in one of those classic ateliers in Paris, at Christian Dior. Steadily evolving insinuations of couture tailoring, teasingly sensational knitwear, the escalating glamour, the classic quote of a Loverboy tartan (echoes of Westwood — Jeffrey grew up in Glasgow with a mum who sported Viv’s finery)… all of this anticipated a moment when the British Fashion Council would be flagging Jeffrey as a standard-bearer for the industry, no longer just a Pied Piper for club kids.

And now, Spring/Summer 2020, which, in a preview earlier in the week, Jeffrey dubbed a significant new chapter for his label. “We’re stepping into more global territory; our audience has tripled in the last year; and we’re staking a claim to being a more multilevel brand.” One level is the young loyalists, the non-binary loverboys and girls looking for a good time (for next season, colours inspired by XRaySpex’s “The Day the World Turned DayGlo”). Jeffrey refers to the other level as “the Matches customer,” an acknowledgment of the business they’ve been building with the online retailer.

A couple of stand-outs to look out for: a cropped jacket featuring a signature Loverboy blend of pagan pictograms and gender symbols (Jeffrey loves the language of signs) rendered in Italian jacquard; the Loverboy tartan translated into an airy, seersucker dress with a swirling Dior-inspired circle skirt; a column that coils around the body, Miyake-like in its sinuous structure. This is all womenswear, but I should point out that the Loverboy business is a pretty evenly gender-split at this point. That’s clear on the catwalk.

I wanted to invest in textiles and technique, push that, get my team to learn more about different factories.

There was a time when the very notion of “a career trajectory” might have seemed a touch banal to attach to an entity as glittering and ephemeral as Loverboy, but Jeffrey claims the seriousness of purpose isn’t a recent development. He jokes that his favourite part of the week is the meeting where Loverboy’s bottom line — sales reports, cash flow — is subjected to stringent analysis by his team of four, with him sitting at the head of the table, Chairman of the Board-like. “I’ve always been interested in business,” he says. “My family has always been like that. My father was a military man, so he’s always been very practical. And my grandfather worked his way up from the bottom. ‘Son, get yer face down, yer arse up and get on with it,’ he told me.” Jeffrey chuckles at the image Papa’s advice summons up. Something very Loverboy-ish about it.

On the day we meet, the Chairman of the Board is sporting polka-dotted navy silk pyjama shorties, his cheeks are delicately rouged (MAC is his favourite), and his six-foot-something height is topped by a style of floppy cap I remember best from Bowie’s “Hunky Dory” days. In other words, a day like any other for him. Which also means his “compact” (read, tiny) studio space is fully occupied by his eight-person team — four full-timers, four interns — working on Saturday’s presentation. Along one wall of Jeffrey’s own narrow office is a rack of autumn/winter 2019 deliveries. His press woman Sophie emphasises that Jeffrey has never not been early with a delivery, which allows for re-orders, especially from Japan. It obviously places pressure on the business, but it has also opened up a world of opportunity. “With this collection,” Jeffrey says, “I wanted to invest in textiles and technique, push that, get my team to learn more about different factories, and what we can do that we’ve not done before.”

That ambition is most evident in a new graphic sophistication. “Every season, we inject artwork into the collection — prints, overdrawing, hand-painting — but this season we looked at it in a more considered, lateral way.” Jeffrey worked with Ventures, the award-winning Kolkata-based textile house which supplies embroideries and innovative fabrics for Dries Van Noten, JW Anderson, Comme des Garçons and Mary Katrantzou, among others. He and design assistant Christopher spent ten days in India, perfecting techniques with names like Bash Crash and Face Jam. One, particularly complicated, involves the duplication in cotton of torn paper, “developed to work within the price range,” Jeffery points out. Another, called “ari,” is a kind of Indian rickrack.

This season, the frenzy is controlled. It feels a lot more considered, curated.

The opening of a new chapter naturally implies the closing of an old one. That’s why Jeffrey considers last season’s extravaganza “Darling Little Sillies” (the silly little Darlings from “Peter Pan” mixing it up with “Cabaret”-styled Weimar decadence) as the end of one era. Anyway, it would probably be redundant to try and top such a theatrical frenzy, so it makes sense for Jeffrey to tone down the theatricality. But he isn’t dialling down the drama. I saw John Vial and Lucy Bridge’s hair and makeup tests. ‘Nuff said.

Nor is Jeffrey backing off from the strong socio-political subtext that has been the spine of his work from Day One. “Anger is an energy: that’s my default setting.” Fury infused his memorably savage Spring/Summer 2018 spectacular, titled “TANTRUM!”, where Theo Adams’s dancers were right up in the front row’s faces. The rage was a distillation of Jeffrey’s own response to years of being bullied as a gay boy in central Scotland. “But this season, the frenzy is controlled,” he says. “It feels a lot more considered, curated.” Still, there’s a heavyweight of intense feeling. He reads from his customary manifesto: “an unignorable sense of crisis”, “a visceral response to societal change”, “progression and regression”, “consciousness and confusion”.

Jeffery is driven by a sense of responsibility, to his burgeoning business, to the people he works with who make it possible, and to a broader social canvas. “Looking after people smaller than you,” is how Peter Pan put it. Volunteering is a theme of his new collection. He researched the voluntary service-wear of WWII in the British Museum. That explains the 1940s-ish silhouettes. He also took a long, hard look at the armour in The Wallace Collection, his favourite resource. Protection, another necessity. And Jeffrey is staging his show in the British Library, because knowledge is also armour, and libraries are also a great equaliser.

The democracy of that vision is reflected in the way he looks at his business. “I didn’t want to always be known as the ringleader of a new generation of clubkids,” says Jeffrey, “but there was always a beautiful camaraderie and energy within that, and I strive for it. This is my vision, but it’s a group effort. It’s always a conversation with people I trust I can get in my own head a bit too much. I think I can go off on a tangent. Am I doing this the right way? Sophie is good at helping me put it in place for the audience.”

One line from the manifesto Jeffrey read me really stuck: “Peace can still be found in the beautiful and the unexplained.” Like Caspar Friedrich’s majestic figure. Like Ursula Le Guin’s poignant words. Different notions of peace. Anticipating how Jeffrey might realise his own take on such an idea in his new collection is one of the pleasures of London Fashion Week.