The Eye of Guy Bourdin

LONDON, United Kingdom — In the 1970s, under the editorship of Francine Crescent, French Vogue was more free and advanced in the images it published than even Diana Vreeland’s American Vogue. For Vreeland, the important thing was the placing of the image on the page.

For Crescent, it was much more about the boldness of the image itself. Vreeland's skill as an editor was to make women purr with pleasure at what they saw; Crescent's was to amuse, intrigue and shock them. Both were legitimate ways to make women buy, which is ultimately the purpose of a consumer fashion magazine.

It is not by accident that French Vogue was titled Vogue Paris. Where other editions — British, American, Italian — set out to reflect the countries in which they were published, French Vogue made it quite clear that fashion in France was all about Paris. Provence hardly featured in its pages. But Crescent's Vogue was not only confrontational in name; its visual boldness meant that it was the monthly 'must-see' for anyone young and working in fashion, advertising or graphic design.

I was working as a designer in Rome in the 1970s and I remember how everything in the atelier stopped, each month, as we pounced on the newly delivered copy of Vogue Paris. What were we looking for? What excitement did we expect? Nine times out of 10 it was a fashion shoot by the photographer Guy Bourdin with searingly bright colours, showing clothes as never shown before.

Indeed, along with Helmut Newton's fashion masterpieces in black and white, Bourdin’s images made Vogue Paris the most exciting fashion magazine in the world. It is little wonder that both men were given a large measure of control, not only over how they shot their stories, but also how they were placed on the page. Both were creative dictators, bringing their ‘alpha male’ preconceptions and priorities to every fashion shoot they ever did.

Newton's woman was strong. She marched towards the camera, looking straight into the lens as if she were determined to stare it down. She smiled only rarely and even then sardonically. Bourdin's models always seemed younger and more playful. In fact, many of the poses that appeared on the page made them seem like fluffy little kittens waiting to be petted and stroked. Or perhaps like wind-up dolls whose bodies could be put into any position the photographer wished.

They seemed like happy victims of his camera, except when they were being presented as actual victims. And with their very strong make-up and especially vivid lipstick, their appearance was often a pastiche of normal fashionability. They frequently looked like perfectly painted toys. Was Bourdin's lens benign or was he using it to ridicule high fashion? It is still an open question today. 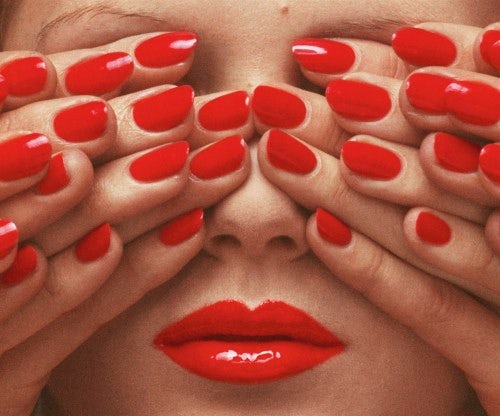 To understand how truly revolutionary it was that Guy Bourdin's ambivalent vision of women was acceptable to Vogue Paris, we must remember the period during which he was the magazine's star contributor. Broadly speaking, his Vogue period was the 1960s and 1970s, the era when feminism was beginning to make its mark, stimulating questions about the gender stereotypes of women (and men).

Germaine Greer's popularist but seminal book, The Female Eunuch, published in 1970, had a huge influence, as did Betty Friedan's The Feminine Mystique, which was published in 1963 as a book because no magazine publisher would accept it in its original form as an article. Feminist magazines like Spare Rib and even Cosmopolitan (which thought it was radical, but was really very tame) were increasingly examining the status of women and, only too frequently, rejecting the idea of high fashion dress because they saw it as means of imposing subservience.

France, however, lagged behind, perhaps surprisingly; after all, it could be argued that the roots of feminism could be found in the writing of Colette in the 1930s, not to mention Simone de Beauvoir's The Second Sex in 1949. But in the 1960s and 1970s, the face of beauty as seen in French fashion magazines in no way reflected the growing turmoil over who, what and how modern women should be.

In the midst of all this we have Guy Bourdin, a hugely successful and exciting photographer whose vision can now be seen as marking a seminal turning point away from the work of 1960s photographers such as David Bailey and Antony Armstrong-Jones with models like Twiggy and Jean Shrimpton, whose fashion shoots created a heightened girl-next-door fantasy image.

Looking at what was happening in fashion magazines across the globe, we know immediately who was more important in the development of fashion photography. It was Bourdin and his seminal work, the very work that many at the time saw as corrosive of the image of women. Dangerous and subversive, Bourdin's portrayal of femininity on the pages of Vogue Paris demanded a cerebral response.

How could the image of a woman naked and lying face down with a stream of blood coming from her mouth fail to make the viewer react? What had it to do with fashion? What did it say about the female as victim? Why had the photograph been taken and why was it published? 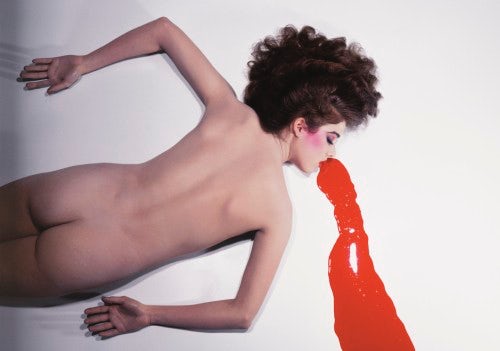 Guy Bourdin was born in Paris in 1928 and first wanted to be a painter. He was an acquaintance of Man Ray, whom he met in the 1950s and, through him, Marie–Laure de Noailles, Jacques Fath and Edmonde Charles-Roux, editor-in-chief of Vogue Paris — all of whom had the power to advance a young and clearly gifted artist's career. Bourdin’s audacity and skill were reflected in his editorial work, as well as the arresting advertising campaigns that he created for Issey Miyake, Claude Montana, Chanel and Emanuel Ungaro, some of the top Paris labels at the time.

But it was arguably the campaigns that Bourdin shot for the shoe label Charles Jourdan that brought him to the attention of the wider public. Unlike any previous shoe advertisements, his work barely showed the product. Instead, the shoe seemed an afterthought, an almost insignificant element in an elaborately theatrical mis-en-scene, which seemed to many to deliberately set out to make the viewer question things not normally presented through the medium of advertising; things hardly even spoken of in mainstream society: sexual exploitation, sadomasochism and good old fashioned bad taste.

Some of Bourdin’s most notorious photographs constructed ‘crime scene’ scenarios of the sort photographed by the American photographer Weegee, who followed New York policemen to accidents and murders to get his pictures, which were often captured in the aftermath of gangland feuds. Frequently, the dead were still lying where they were mown down, blood oozing from their bodies. But more often, they had been removed, leaving the outline of the body's position drawn with chalk on the sidewalk.

It is this that Guy Bourdin adapted for the Jourdan advertisements, with one vital difference: the victim's outline was always female. Violence against women had frequently been presented by other photographers with much less intellectual rigour and artistic brio, but, somehow, they seemed to shock less because they lacked the elegance of Bourdin's eye, which transformed the most successful of his carefully planned and crafted shots into at least a minor art form, no matter how distressing the components.

And it was that eye that took models to the country or down to the sea to create fashion shoots as wholesome as those of other photographers but — this being Guy Bourdin — always containing something more than initially met the eye.

With Bourdin, first impressions are not enough. The eye must always look for the sting in the narrative. Looking back at the work that Bourdin produced for both Vogue and Jourdan, it’s clear what saved it from the banality of the army of copyists who rushed to follow his lead. It was his sense of humour and the fact that he was clearly a man who loved female flesh. Moralists may carp, but I believe that the wry smile rather than choked terror is the response Bourdin was aiming for — a response that makes him a worthy protégé of his acquaintance Man Ray. 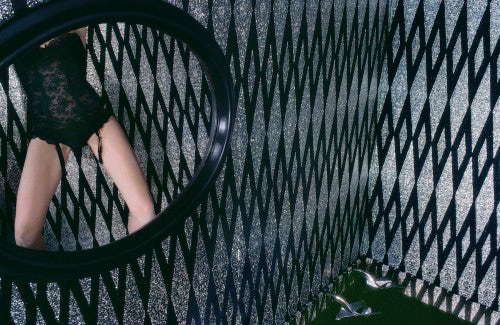 Surrealism is meant to amuse as much as intrigue, to divert as much as shock, to make us question our reactions. A woman in a glamorous lamé evening gown lying in an abandoned garden wheelbarrow — as in Man Ray's "Model in Dominguez' Wheelbarrow" — is meant to entertain because of the unexpected juxtaposition of sophistication and utilitarianism. But it is also meant to encourage us to question our preconceptions and ask why a woman should not behave as this one is doing.

This is surely the essence of the approach Bourdin adopted in his own work, which, in turn, influenced photographers such as Deborah Turbeville and Jean Baptiste Mondino and, more recently, David La Chapelle, Mert and Marcus and too many photography students to count.

I hope he went to work with a smile on his lips and a twinkle in his eye because he knew that the point of surrealism is to help us adopt an alternative view. Guy Bourdin died in 1991, having refused several honours, including France's Grand Prix National de la Photographie six years earlier, content to have left a body of work as radical and modern today as when it was first created. “Guy Bourdin: Image Maker” is on view at London’s Somerset House until 15 March 2015.