Colin’s Column | Tomes of the Times

LONDON, United Kingdom — Caroline Evans is a rare academic in that she can actually write in a way that the rest of us, who are not academics, can understand and appreciate. She is clearly serious about her subject, but understands that no amount of knowledge has value if it is not communicated clearly. What a pity so many of her colleagues lack her skill. The Mechanical Smile: Modernism and the First Fashion Shows in France and America, 1900-1929, published by Yale University Press, is her first book since her definitive volume, Fashion at The Edge: Spectacle, Modernity and Deathliness (Yale) published in 2003, an instant classic of modern criticism, commentary and elucidation which anyone interested in the wellsprings of fashion creativity in the past dozen years or so should possess and read. 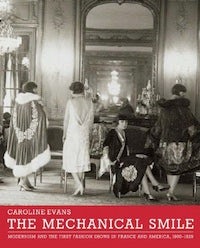 The Mechanical Smile: Modernism
and the First Fashion Shows in
France and America, 1900-1929
by Caroline Evans

That book examined the worlds of Galliano, McQueen and other avant garde fashion designers who in the 1980s, 1990s and on had such an impact, not only on fashion, but on other arts as well. Evans' explanations of how and why this happened are as riveting as they are enlightening. Her new book is in the same strong tradition. And although her subject does not seem immediately gripping, it makes compulsive reading for all who are serious about fashion and its history. It is an examination of the creation, development and influence of the fashion show in the first thirty years of the last century, a period when fashionable dress was beginning to be of much broader interest to the general public, not merely the enclosed world of the very rich. And the thing that made it so was the rise of the fashion presentation as the moving tableau that we now call a fashion show.

Evans examines in great and fascinating detail how fashion shows opened up the world of designer clothing simply by showing it in motion. Her argument is that this was a crucial and far-reaching example of what Walter Benjamin, the German critic, theorist and philosopher, was referring to when he coined the expression "new velocities" for creative change in his book The Work of Art in the Age of Mechanical Reproduction. Evans does not comment directly on the fashion of the time. Instead, she examines the much longer-lasting trends in presentation and interpretation of dress in the crucial first thirty years of the last century, when fashion shows were not just changing the ways in which women dressed but also how they projected their femininity. It was the birth of one of the most potent players in modern fashion: the professional model. By the way they stood, moved and generally carried themselves, the models in shows, like the actresses on screens, pointed the way to the new femininity of flappers, the sportswear of Patou and the fluidity of Vionnet's bias cut in a clear line that is still evolving today. This is a book to keep by your side as a reference that will surely reveal much more than you might first imagine.

Many years ago, Ralph Lauren told me of his ambition to see an American woman of fashion, dressed in a silk shirt, perfectly cut flannel pants and a cashmere cardigan, walk into a room of women dressed in French couture and look so modern and confident that she would demolish the others. He did not give a name to his fantasy woman, but I am sure that it was CZ Guest (nearly always known simply as CEE ZEE) that he had in mind. 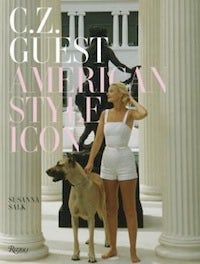 C.Z. Guest: American Style Icon by Susanna Salk (Rizzoli) is a glamorous picture book devoted to the woman who, along with Katherine Hepburn (another Lauren heroine) invented modern class in American fashion. Guest had the bluest blood that America can muster and her social credentials were impeccable, as was her taste. She was also married to a very rich man, which in the days of Truman Capote's "swans" was a prerequisite for the fashionable woman of style

Why does she actually matter? Because, led by Vreeland and her bold, trail-blazing Vogue which retains its aesthetic supremacy even now, sixty years on, CZ was the leader of the pack of very wealthy American society women such as Babe Paley and Mona Bismarck, a group who were the mothers of invention for modern American high fashion. Their inspiration, wealth and class gave confidence to the young American designers who loved their bold social aplomb (and money) and took courage from the fact that, on their determined backs, American fashion could look as good and even better than fashion from Europe. And, in the 1970s and 1980s, it was a largely correct assumption

But CZ Guest was no vacuous clothes horse. She lived a country life as much, or even more, than a town-centred one and always dressed down for it in every respect except quality. But when it was dress-up time, nobody did it with more sophisticated simplicity — a concept which is probably her most lasting legacy to New York fashion and, from there, the world. It is no exaggeration to say that the history of post war American style was written on her expensively covered back and exemplified in her artful playing of high fashion social games. She is now correctly seen as a crucial figure from a historic fashion parade of the socially elite, which is why this book, which rises above the level of social hagiography to illuminate that period, is of interest. 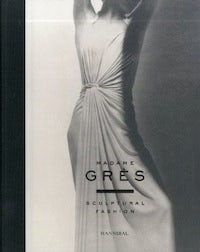 How many books do we need about Madame Gres? No more, now that we have Madame Gres: Sculptural Fashion by Olivier Saillard (Hannibal). The catalogue of  the 2011 exhibition of her work presented at the Musee Bourdelle in Paris by the Palais Galleria, and later by MoMu in Antwerp, captures the feeling of the exhibition in which clothes by Gres were placed in and among the neoclassical monumental sculptures of Antoine Bourdelle from the turn of the ninteenth century. It is elegant, understated and even chaste — all characteristics of Madame Gres herself. She really was a unique figure in Paris fashion, happy — even determined — to stand outside the main stream, preferring to close her door, mind and heart against the world. She was a great rejector, who refused to show enthusiasm or even interest in virtually anything brought to her for approval, whether an idea, an opportunity or a proposal. Only one thing mattered to Madame Gres and that was honing her craft and, as she aged, she resented anything that took her away from her self-imposed task.

Madame Gres not only chose a reclusive lifestyle. She also had a reclusive mind, able to block out virtually anything which she felt was irrelevant — and that included most of the daily weft and warp of the public life expected of a designer. Her standard response to all suggestions was "I'm working," which, as all those around her knew, meant end of subject. Little wonder that she once said, "All my days are the same." Of course they were. She had programmed them to be so. Obsessive and inward-looking, she was undoubtedly a genius and totally unique, even in her working methods, as her cryptic and frequently trenchant comments make clear. "I hate sewing. I never sew... I drape the material on a mannequin, then I thoroughly study its nature and it is afterwards that I take my scissors... the cut is the critical and important phase of the creation of a dress… for each collection I prepare I completely wear out three pairs of scissors."

Does that sound familiar? I thought not. This is craftsmanship a million light years away from the ethos of modern fashion creation. Obsessing over price points, the new handbag, seeing how many stores can be opened in a year and all the things that seem an important part of the job to modern designers were subservient to the job of getting the garment right, as far as Madame Gres was concerned. Creative things mattered, the rest did not. It must be said that this thoroughly worthy catalogue would surely meet with her austere approval. It isn't a huge and heavy glossy tome, as most designer monographs are. Instead it is a sober and very elegant catalogue of an exhibition that can only be called landmark. Interestingly, if you turn the book on its side and look at the elegantly draped gown on the front cover, you will get a sudden insight into why the work of Madame Gres is so often called organic — it looks like a deserted landscape sculpted by wind and time to an elegant perfection that entirely reflects the contents of this essential book.

For many fashion scholars, Madame Gres is the only important designer who worked in Paris in the last century, even though she was the one who got away, avoiding all the hysteria and hype accorded to lesser figures much better known now. Her life and work are a testimony to the value of doing ones' own thing, because to do anything else would be a betrayal of your heart, soul and creativity.