LONDON, United Kingdom — The days are longer, the skies clearer and the holidays more frequent; summer, it seems, is a season naturally predisposed to the leisurely escapism of reading.

To help you while away the summer hours, BoF columnist Colin McDowell offers his biannual list of book recommendations — mix of striking visual anthologies and engaging deep-dives into fashion's most influential figures. Whether you're looking to lose yourself in the tumultuous life story of Yves Saint Laurent, learn about London's swinging retail scene of the 1950s and 60s, or marvel at the oft-overlooked creativity of nail artists, there's a volume for for you. 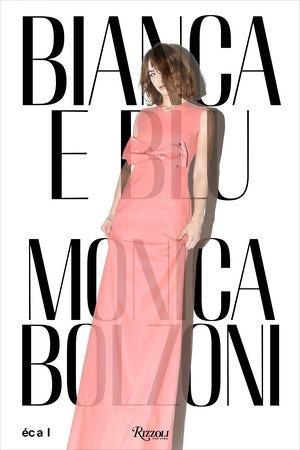 Working in fashion is not for the lazy or work-shy at any level. However, at the "sharp end," the world of the designer and his teams is not only perma-stressed but at peak — ie. most of the year — working days beyond legal and humanitarian expectation are standard. The result is a form of semi-permanent tension that makes abstract thought secondary and leaves little time for contemplation. The effect of this is that theorising is too often left to academics or those who have left the designer coalface for easier fields. And that is normally not an especially productive situation.

But, of course, there are exceptions who have not become world figures even though their work is clearly of value. One of them is the Italian designer Monica Bolzoni, a seminal figure in Italian fashion design whose association with various prestigious academic establishments in Italy marks her out from the general run of fashion designers and theorists. Before opening her shop, Bianca e Blu, in 1980, she worked in Milan and has had an active role in many aspects of fashion including education, whilst promulgating her views on what dress should be. The fact that 10 Corso Como is displaying her art work and commentary at the Gallery is testament to its quality. It should be widely read, especially in educational establishments. 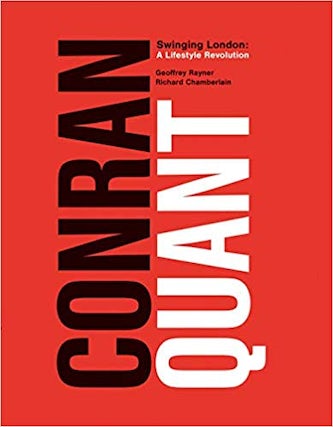 It was a clever idea to bring together the two people who followed on from the hugely successful Festival of Britain, which brought British creativity in line with post-war modern design. In a country weary of looking back, where the young, coming out of universities and art schools, often first-generation educated, were beginning to change society the work of both Mary Quant and Terence Conran was hugely influential.

The year that Quant first started selling clothes, initially with fabrics bought from Harrods and made by her using her mother’s sewing machine, was 1955. The year when Conran began selling modern wooden furniture modelled on that of Scandinavia was 1956. Together, but separately, they both broke through years of looking back and adapting ideas from abroad in their different fields and went their own way.

Even more important to their work was their ages. Both were in their early twenties when they started out, younger than was normally taken seriously by backers and businessmen.But Quant-Conran were the first in the field not only as designers but also what they sold in their own shops. It is not an exaggeration to say that they both pioneered ideas that had barely been considered in Britain previously: clothes cheap enough to be bought by secretaries and furniture that was clean–lined and did not look back to the sort of furniture that previous generations lived with.

They fitted the tenor of their time: practical, universal and accessible. So much followed these pioneers of style that they can be called not merely creators but leading lights in a changing society. In fact, these two perky designers/entrepreneurs were seminal figures in the birth of the Youthquake.

'Issues: A History of Photography in Fashion Magazines' (Phaidon) 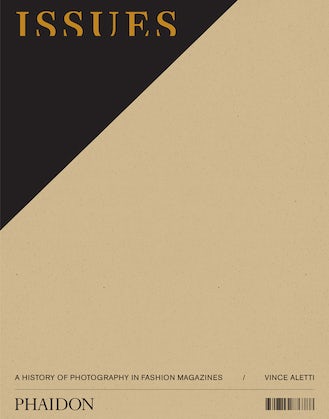 Twenty years ago, I suggested to my publishers that a book of the best photographs of Vogue and Harper's Bazaar would do well. They treated me kindly but pointed out that the rival publishers of the magazines were very protective of their copyrights and would never appear together in any book. And I am sure they were right.

Time moved on and now I am delighted to say my dream has come true and is even better than mine, as Vince Aletti does not limit himself to those two leading magazines, but also includes other publications that he finds outstanding. These include Dazed and Confused, Dutch, Details, Love, Egoïste and other avant-garde publications, even some that died too soon.

The result is a fabulous record of almost 120 years of glossies, starting with Harper's Bazaar and ending with Document's Spring 2018 issue. It is not an exaggeration to say 'Issues' is a masterwork, a cavalcade of the best of the best. It's a tribute to all of the artistic directors, fashion editors and stylists that have fearlessly pushed forward barriers and educated their readers.

This book is a true panorama that traces the growth of fashion as a social and creative witness to changing attitudes and beliefs, from the days when it was a rarified pleasure of the rich to the all-embracing position it is in today. And what a panorama! From de Meyer, George Hoyningen-Huene, Martin Monkasci, Cecil Beaton Irving Penn and Richard Avedon and on through the last 40 years of the 20th century featuring the names of the "greats," with the extra bonus of the commentary to their imagery by Eletti, whose impeccable research is both sound and revealing.

This is a book for all who are interested in social and creative development through style, photography, fashion and glamour. Challenging, stimulating and beautiful, there is, literally, nothing to not like about it. 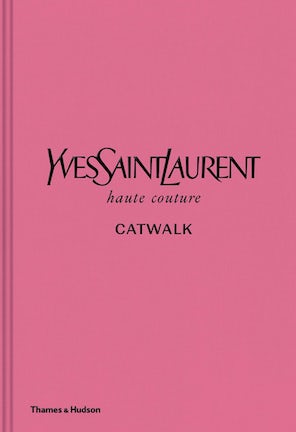 This hefty book contains over 1,000 runway shots covering Yves Saint Laurent's work from his days at Dior to the moment he left his own company after a career like that of no other designer. His audacity and confidence led him to endlessly break the rules, shock the moralist and make luxury clothing more expensive than any before and probably since.

And, of course, he invented more fashion looks than anyone. There are several books published about his career, life and influence not only in the powerful salons of high-fashion but also, with his masculine/feminine looks, on every chic High Street. Many, in fact, would say his truly lasting legacy for women would be the fact that pants are now standard female dress globally, alongside jeans.

Furthermore, although it has taken a very long time to come to fruition on catwalks and magazines generally, Saint Laurent was one of the first designers to use non-white models and certainly among the first to send a black model down his runway as long ago as 1962. There are too many noticeable firsts to list, but surely one that must be remembered is his show at the Stade de France in 1998, when 80,000 soccer fans watched entranced as the world's top models paraded the great looks encompassing his entire career, to the pounding rhythms of Ravel’s bolero. No wonder France was so proud of him.

Apart from the runway pictures, worth the book's price alone, Haute Couture Catwalk is enhanced by a perceptive introduction by Suzy Menkes, an illuminating essay by Olivier Flaviano and description of all the runway clothes by Aurielle SamuelCK. It is a photographic encyclopedia of one of the 20th century's greatest creators. 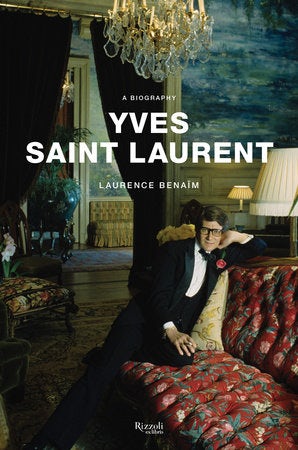 To complement the visual survey of Haute Couture Catwalk, the 2002 biography of Saint Laurent by Laurence Benaim has been re-issued by Rizzoli. It makes for a very good companion, not only for the detail of the life of the tortured designer, who moved from fashion guru to middle-aged decadent to, finally, the Grand Old Man of couture in his last 20 years.

It was a rocky road — nervous breakdowns, insecurities, tantrums and feuds — most notoriously with his long-time friend Karl Lagerfeld. Benaim has an intimate way of writing that examines all aspects of Saint Laurent’s life — social and professional — and her text sparkles with insider anecdotes from his life-long friends including Paloma Picasso and Catherine Deneuve and his "comrades in arms" and emotional props, Lou Lou De la Falaise and Betty Catroux. 'Yves Saint Laurent' is a long, but very satisfying read.

(Other books on YSL worth reading including Yves Saint Laurent by Alice Rawsthorne and Alicia Drake’s The Beautiful Fall, which largely deals with the designer's emotional life and feud with Lagerfeld.) 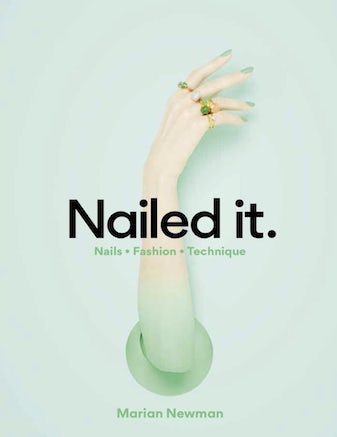 Marion Newman began in the fashion and beauty industry in 1996, 10 years after she had started her own nail salon. Out of the blue, she received a phone call asking to help out on a studio shoot in Clerkenwell Road.

Newman enjoyed the shoot with Nick Knight, Lucinda Chambers and Kate Moss, which was for a British Vogue cover. (Definitely a case of starting at the top.) She went on to collaborate regularly with Knight, the hairdresser Sam McKnight and make-up artist Val Garland — groundbreakers all — and worked on campaigns for Dior and M.A.C., for which she eventually designed a collection. Called Transformations, it consisted of six iridescent colours and was a great success.

This is not just a pretty book of pictures, although there are plenty of those. Nailed it is valuable for the technical information it contains, from advice on tool kits and a directory of suppliers. This is a book about how to be a professional and will be invaluable to anyone aspiring to work in the lucrative nail-art industry. It will find an eager readership and should be on the library shelves of fashion colleges and any institution helping young people, who are thinking of a career in this field.