LONDON, United Kingdom — Coco Chanel knew a thing or two about selling, skills she learned from her travelling salesman father. And as she once said to the satirical illustrator, Marcel Vertes, she chose her house models very carefully to ensure that the customer was not overwhelmed by their glamour and elegance, but could identify with them. "Their job is to make the customer envy them and want to be like them. That is when they buy," she stated. Balenciaga was light-years away from Chanel in terms of his fashion attitudes, but he also knew that models should not be frighteningly perfect or too glamorous for women to identify with them.

Models have played a valuable — even crucial — role in fashion since the beginning of the 20th century. But in the early years, they were normally in-house employees who showed the clothes to customers at private appointments, which was, then, the only way to buy designer clothes. At the time, the public face of a collection was provided by a select number of private customers whose lifestyle or position in society convinced couturiers to lend them clothes to wear to top social events as a kind of walking billboard, charged with frequently mentioning the hallowed name of the designer to all who expressed interest in what they were wearing.

And it was from these itinerant sales ladies that the first germ of the runway developed. But to move forward, the system needed a push, which came in the form of the huge advances in photography that occurred between the 1920s and 1950s. Of course, the newly popular medium required beautiful, stylish women to wear the clothes that were increasingly featured photographically in magazines such as Vogue and Harper's Bazaar.

First in the field was Marion Morehouse, followed by Lee Miller and, then, the amazing 1940s models: Lisa Fonssagrives (who married Irving Penn and had 200 covers for American Vogue), Dovima, Suzy Parker, and her sister, Dorian Leigh. All were exceptionally elegant and perfectly beautiful and yet remained accessible to most of the growing number of middle class American women with serious money to spend on expensive dresses; women who had become the prime sales target for Parisian designers.

But fashion is a restless beast. It can't be tamed  for long, even by perfection. Only too soon today's longed-for looks become yesterday's laughed-at looks. And this does not just apply to clothes. It applies equally to the women who show them, either on the runway or in the pages of the glossy magazines.

By the end of the 1950s, possibly the greatest period of high fashion, the little worm of boredom — the creature that always kills fashions — had begun to undermine the status quo, ushered along not only by new social attitudes but also by newly developed sexual freedoms. The fashionable woman was no longer the perfectly turned out, immaculately coiffed lady wearing a hat and frequently carrying gloves. Riding on a new wave that swept her aside was a young, funky and independent woman. She was not even that lady's daughter, but someone from a different class altogether.

She was the pointer to the future: a working class London girl whose skinny body earned her the nickname Twiggy as well as good-natured jibes that she was two legs and two arms looking for a body. In the Swinging Sixties, Twiggy was the perky epitome of the new face of fashion, though she was soon followed by the middle class girl Jean Shrimpton, who, along with the man who made her career, photographer David Bailey, took New York by storm.

But the woman who was perhaps the world's first supermodel was yet to come. And she was neither British nor American. She was German. And she was not from the working classes.

Veruschka, or Vera Von Lehndorff-Steirnort, was a Prussian aristocrat, over six feet tall, patrician and with a dominating camera presence never achieved by Twiggy or Shrimpton. As Diana Vreeland, former editor-in-chief of American Vogue and a great Veruschka fan, wrote to her as her career was waning: "The marvellous exaggeration of clothes on you is something I miss very much… You are a total figure of fashion." That is why she gave Veruschka no less than 11 American Vogue covers and ensured that she worked with the very top photographers in the magazine's stable, including Irving Penn and Richard Avedon.

But, long before her Vreeland days, when Veruschka was first trying to break into modelling, things had been harder. To begin with, Vera, her given name, was neither romantic nor memorable, which is why she changed it to Veruschka, her childhood nickname. Her looks were, by the standards of the time, strange but very memorable. She recalls how American model agencies were shocked by the size of her feet. But Veruschka was not just different; she brought to modelling an exotic, Eastern European look that paved the way for many girls who have succeeded her despite the fact that they were not typically beautiful by the standards of the time. Marpessa, Devon Aoki, Grace Jones, Penelope Tree, and Lily Coles are all, in their different ways, sisters of Veruschka.

Vreeland's Vogue gave us Veruschka at full strength, but when she was still a beginner (and still called Vera) she worked with an Italian photographer called Johnny Moncada, who took thousands of photographs of her, mainly using black-and-white film. They show us a naive, uncertain, even gauche young woman whose extraordinary beauty was formed even then. As she has said herself, "In my twenties I still felt like a little girl… but with Johnny I felt so comfortable and protected when he was around me." 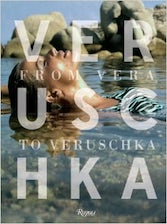 From Vera to Veruschka (Rizzoli)

A selection of the photographs they made together have now been published and, although, in their naivety, they could be called Veruschka Lite, they are of interest as a catalogue of the first tremulous steps towards the career of a woman summed up in 1967 by Time magazine as, "The girl everybody stares at." What higher praise can there be for a fashion model?