MILAN, Italy — Milan's Salone del Mobile, the design and furniture fair which closes on Sunday, has, once again, been overwhelming. The number of activities going on at once — performances, exhibitions, special projects, installations, parties, dinners and cocktail parties thrown to unveil furniture-related shop windows — is just incredible. Hidden and not-so-hidden city spots are given a sudden boost of visibility, making the whole urban fabric come alive, pulsating and, frankly, quite magic. Milan is a wonderful European capital whose understated beauty truly shines when the stiffness softens and the cold demeanour turns into shy kindness. It happens all the time with Salone: secret gardens and forgotten locations are opened for a few days, before reverting back to urban oblivion.

Cartier occupied a garage full of ultra-leftist political memories with a gilded garage conceived by artist Desi Santiago, while Swarovski installed its atelier objects in one of Milano's most stunning private mansions, Palazzo Crespi. On top of that, unlike with fashion, design events are open to professionals and the general public alike, so the general impression is chaotic and lively. Seeing everything is practically impossible, but that's also the point of the Salone del Mobile: you just choose the neighbourhood you want to attack — 5 Vie and Foyer Gorani in particular, was stunning — get lost in the streets and discover things as you walk. The feeling of treasure hunting is an authentic thrill. 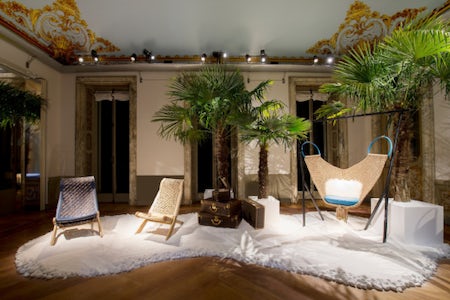 This said, a fil rouge is mandatory in order to derive meaning from the intense visual bombardment of such a freewheeling week. Fashion, in the broadest possible sense, is my chosen angle, and not only because of the ongoing integration of fashion and design and the way brands are expanding into furniture and other homewares. The fact is that fashion, as a mindset, is probably the keenest instrument we have at our disposal to truly decipher the contemporary world and the hyper-accelerated, oblivious, eminently superficial logic it follows. Fashion's proclivity for the sampling of other languages, its natural, blood-thirsty attention for other disciplines and its ability to turn literally everything into eye-catching visuals, is the perfect definition of the now.

The times we are living are intensely fashionable because style — intended as a way to do things and a personal mark on everything — is king, from entertainment to politics. Design follows. The most interesting things happening in Milan, in fact, were intensely fashionable, without being directly fashion-y. Not differently from fashion, where assemblage of disparate references and pell-mell styling replaced authentically innovative design, the focus this season at the Salone seemed to shift from the stark and ultimately cold relevance of a single piece to the all-surrounding charm of atmosphere.

It's what wunderkinds Dimore Studio — Britt Moran and Emiliano Salci, who are also fashion darlings — continue to do in a wonderfully eclectic, charming way. It is also the taste that Cabana Magazine, led by Martina Mondadori, keeps doing. Albeit heavily redolent of the good old lifestyle magazine Nest, thus not completely original, Cabana is setting the current pace of a certain taste — eclectic, nostalgic and aristocratic, with a contemporary knack for unexpected associations of obvious and precious, sleek and overtly decorative. Just think of it as a spatial equivalent of Alessandro Michele's intoxicating collages for Gucci. Mondadori curated an atmospheric passeggiata — stroll — at Casa degli Atellani that gave a poignant insight into the world of some of Milano's preeminent tastemakers. Are they mostly well-to-do, connected and decidedly not underground or edgy? Definitely. That's Italy, after all. Yet, finally, we have yet another iteration of Italian taste. One that feels internationally relevant and recognisable. 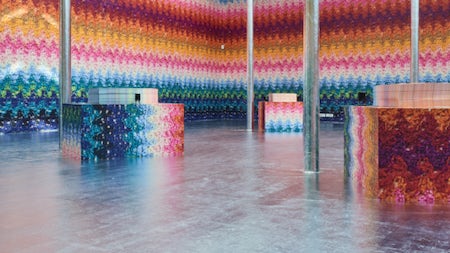 On a more obvious level, there was a lot of fashion branded furniture on show in Milano. Designers doing homeware and invading design week is probably the most logical, but also the most banal brand extension. It certainly isn't the newest, but it's definitely the most marketing and market driven. It all started way back in the Eighties, in Italy in particular, when all of a sudden the rabid appetite for consumption of suddenly wealthy customers made them ask for more: and that included chairs, towels and bathroom tiles, as long as a flashy designer name was clearly visible on them. Today the same appetite has migrated to new markets. The nouveau and not-so-nouveau big spenders like to have a velvet chair with a bold brass logo or a fur-shaded lamp like Fendi is doing, Smeg kitchenware swarming with sunny Sicilian motifs as Dolce & Gabbana proposed, or a sleek Armani sofa and lamp.

It works. The market expansion certainly caters a need, and is economically successful, but this being Salone del Mobile — the forefront of design innovation — and thus judged from an exquisite design perspective, it is a bit pointless. To put it bluntly, what is shown by fashion houses is just furniture and stuff au courant with the taste of the moment, with the only difference of the name being put on top of it. It does not push the design conversation forward. 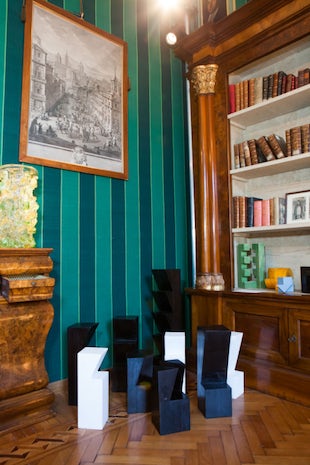 This being the frame, it is certainly interesting to see how for certain brands — Diesel, Fendi, Armani — the furniture proposal has blown into something articulated and autonomous, not just targeted to fashion-savvy customers. The absence of logo, and of anything rock or blatantly edgy whatsoever is particularly noteworthy in Diesel Living. Andrea Rosso, creative director of the brand's furniture division, worked hard with his father Renzo in order to develop a series of pieces that can stand just plainly as well-designed, desirable items, joining forces with some of Italy's most prestigious firms in order to get the best in each category, from kitchen to bed linens.

Armani Casa, too, has evolved into a fully articulated offer. This season Mr. Armani opened the new Armani Casa Flagship, a three-storey temple to sophisticated minimalism, in a particularly relevant site for the city: at the corner of Corso Venezia and Via San Damiano, where the iconic De Padova store, a pillar of Italian Modernism, once was. The De Padova's roomy space got a very Armani-esque makeover, and got fully packed with exotic-hued, sleek, but ultimately warm furniture. What got lost was probably De Padova's magniloquent sense of empty space. There was too much stuff on display: a tighter edit would have helped.

More esoteric approaches to furniture and roundabouts surfaced in higher fashion echelons. Hermès has been doing superbly refined home stuff for quite a while, and keeps on delivering, while Louis Vuitton continues its ongoing series of Objets Nomades: travel-inspired home pieces developed in tandem with outstanding authors of the design panorama. At Loewe, Jonathan Anderson has adopted a curatorial practice which naturally extends to furniture. This season, it was throws, minimalist chairs and leather-detailed ceramic bowls, but it was the slightly surreal cushions with crocheted human silhouettes that stole the show. It all felt playful and odd, in a very Anderson kind of way. 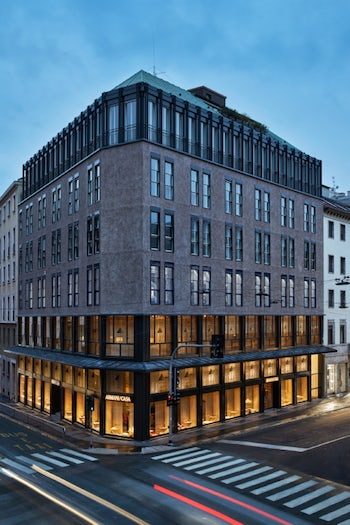 Yet when it comes to solidifying the values of a brand using furniture as an extension, no one can beat Rick Owens. His range of chairs, cutlery and glasses is deliriously luxurious and utterly primal, and actually offers a sturdy pillar to one of fashion's most unique and enduring aesthetics. Strangely enough, even Birkenstock's expansion into bedding felt like a strengthening exercise that extended the idea of ultimate comfort from Fussbett sandals to, exactly, beds.

An interesting aspect of the Salone is how certain brands use the occasion in a loose and abstract way in order to chart mildly artistic waters. The installation Antonio Marras developed using a series of old slipdresses around special lamps conceived with the Campana brothers looked poetic and melancholic, hence purely Marras, while the joyous Marni playland was an engaging, naive display of special furniture made in Colombia that worked in sync with Marni's multicultural, artsy DNA.

Yet, one way or another, all these practices are nothing more than glorified display. They charm, but remain superficial. Where this edition of the Salone truly promoted progressive values were side projects aimed at developing new solutions that can be applied to furniture as well as clothing. From Luca Gnizio's reuse of discarded carbon fibre to Giovanni Bonotto's fabrics made with a recycled PET yarn, it looks like sustainability might have a wholly new, futuristic feel pretty soon — one that will be relevant, not a gimmick. This is something that can impact the lives of all of us. The rest is just pretty furniture and assorted stuff to put in a nice room.