PARIS, France — In recent seasons, it’s become increasingly common for fashion shows to end with a tableau of models, perfectly positioned to be snapped and shared on social media. But at the most recent round of Paris menswear and couture shows, the staging of these instantly sharable moments rose to a whole new level of sophistication.

Then, the next day, arriving at Berluti’s magical menswear presentation in the gardens of a private hôtel particulier in the Place des Vosges, attendees were guided through a darkened hallway fitted with a pair of stationery multi-rider bicycles, manned by models wearing the brand’s iconic shoes, exposed through a perfectly-lit window that ran the length of the hallway. Intentional or not, this in-motion tableau presented the perfect opportunity to use Instagram’s newly launched video feature. 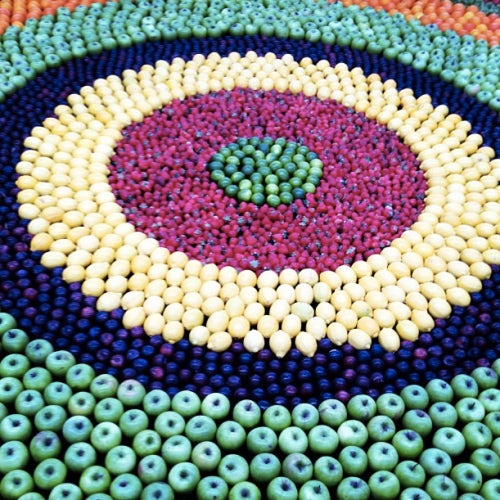 On Saturday, at the Kenzo show, it was all about fruit. While show-goers waited in a holding area before entering the show venue, just outside the Périphérique ring road which circles central Paris, we were treated to freshly squeezed juice and an immense installation of fruit, laid out in highly photogenic concentric-circles on the floor. As a friend who did not attend the Kenzo show said to me later, “I saw more images of the fruit on Instagram this week than anything else from the show.”

But perhaps the most powerful example of these made-for-Instagram moments came at Christian Dior’s couture show on Monday afternoon, where actual couture clients got in on the action. For his third couture collection for the house, Raf Simons explored the colours and cultures of four different continents: Europe, the Americas, Africa and Asia.

And after the show was over, scores of the brand’s clients and VIPs from all over the world — I could hear them speaking in languages ranging from Portuguese and Italian to Mandarin, to name just a few — were excitedly lining up to take photos of each other against huge, digital screens which had only minutes before projected close-to-realtime images taken by photographers Willy Vandeperre, Terry Richardson, Paolo Roversi and Patrick Demarchelier during the show. It was pretty clear to me that they were sharing the moment with their friends and followers on social networks, as a way of showing they had been part of it all.

A few days prior, Suzy Menkes joked to me that several of Bernard Arnault’s brands were trying to outdo each other by staging expensive shows with impressive production and that she would love to see a BoF article breaking down the costs of these shows. While the expense of staging these tableau-rich shows remains unclear, what seems quite clear is that their rise is linked to the growing importance of social media amongst the fashion tribe and its global followers. First, it was Facebook, and then Twitter and Tumblr. But no social platform has had quite the same effect on the fashion industry as Instagram, which seems to have pushed the staging of instantly sharable fashion show moments past something of a tipping point.

But why has Instagram been so successful with the fashion community?

Almost immediately after it launched, the clever, bite-sized image-sharing platform took off. Like Tumblr, Instagram is an 'image first, text second' medium (the inverse of Twitter) — which clearly resonates in the highly visual fashion industry. But because it's also 'mobile first,' Instagram is a perfect fit for on-the-go fashion professionals who are constantly hopping from event to event with their virtual followers in tow.