For Prada, Success in the Bag

After a few tough years, Prada’s moves to revitalise its handbag offering are paying off, notes Luca Solca.

For Prada, Success in the Bag

After a few tough years, Prada’s moves to revitalise its handbag offering are paying off, notes Luca Solca.

GENEVA, Switzerland — Prada has gone through a rough patch. But management’s efforts to pull the Italian luxury group out of its funk are bearing fruit. These include sharpening its digital presence, introducing new sneaker lines and generating buzz with pop-up stores — belated perhaps, but better late than never.

The company has also set its sights on the most fundamental element of all: product. In particular, the steps taken to revitalise the group’s offering of handbags — the biggest money-spinner for luxury brands — are worth a closer look.

To see what Prada is doing right, first consider what went wrong. The group raised the prices of its bags to the very high end of the market, reaching levels one would more commonly associate with Chanel and Hermès. But this is a brand whose most iconic product is made of nylon. No wonder consumers saw Prada bags as overpriced. It didn’t help that the group simultaneously decided to narrow its product range. Sales took a hit.

For now, it seems that Prada’s strategy is paying off.

Since then, the group has reconsidered its pricing strategy and is filling the gaps in its pricing pyramid, particularly in the entry segment. This is borne out by Exane BNP Paribas research examining the pricing of more than 10,000 luxury handbags: four years ago, Prada had effectively no handbags priced at or below €499; whereas, today, this entry segment accounts for 1 percent of its total offering. The group has also expanded the proportion of its bags in the €500 to €999 price range from 13 percent to 18 percent.

Did the group suddenly start slashing its prices, cheapening its brand image? Of course not. Instead, nylon was reintroduced and pushed more aggressively, such that leather fell from 92 percent to 72 percent of its offering. Prada also focused on small bags, as well as handbag equivalents like large wallets, which now account for 10 percent of its offering, up from an insignificant base four years ago. All these are priced more modestly than Prada’s average. 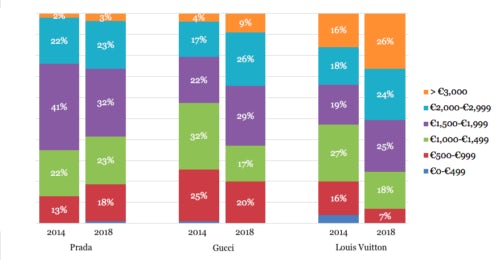 Prada is lowering the prices of its handbags, in sharp contrast with Gucci and Louis Vuitton (price ranges in €) | Source: Exane BNP Paribas

It’s also interesting to note that while Prada is lowering its prices, large rivals like Gucci and Louis Vuitton have been hiking theirs. The proportion of Gucci bags priced at €1,500 or more is at 63 percent today, up from 43 percent four years ago. At Louis Vuitton, such bags now account for a startling 75 percent of its bag offering, up from 53 percent. In contrast, Prada has seen a drop from 65 percent to 59 percent.

These changes to pricing structures have caused the median price of Prada bags to decline 3 percent over the past four years, from €1,650 to €1,600. Meanwhile, the median price of Gucci bags has risen 20 percent while that of Louis Vuitton has climbed by 26 percent. For now, it seems that Prada’s strategy is paying off. Sales grew 9 percent in the first half of 2018. While fashion is fickle — and all the more so in this day and age — the company’s old-fashioned move to focus on its products is winning it new fans.