NEW YORK, United States — Change is the essence of fashion yet it is not always good. It can bring profit or loss. But in the case of Gucci, the Kering-owned megabrand needed change— a lot of change. During Frida Giannini's profitable tenure, which lasted for almost ten years, Gucci had become something of a fait accompli. It kept delivering the goods, well-done and on-time. Yet its edge got weaker as seasons passed and the sex ante got sleeker. And without edge, the flame of desire soon fades and, with this, the urge to buy.

Enter Alessandro Michele, Giannini's former lieutenant, whose impromptu appointment to the role of creative director at the beginning of the year, at first, seemed sudden and random, but now appears to have been something of a godsend. Gucci is hot again— very hot— with a bunch of pundits calling it the future. Restraint is not one of the prime virtues of fashion commentators. Yet the coolness of the brand has been restored, which is a valuable accomplishment in such a short time.

The circumstances of Michele's rise to stardom are widely known by now, along with the fact that he, allegedly, created his first men's collection in less than a week and his first women's collection in under a month. Expectations, therefore, were high for his Cruise 2016 show, which was staged yesterday at the Dia Art Foundation in New York's Chelsea, amidst a scattering of carpets. 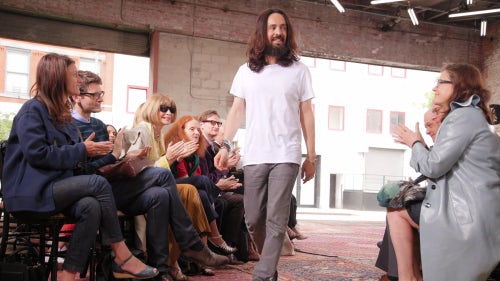 This was Michele's first proper collection, meaning that it was created within a normal timeline. It was jam-packed with ideas, from metallics to decadent prints, but the designer did not diverge from the quirky, slightly weird and decidedly eccentric design parameters he set right from the start. “It's been an organic evolution so far,” he said backstage, “because, in the end, one day or a month are just the same for me. I follow my own instinct and do not try to please anyone but myself when designing. In this sense, I could create a collection almost every day.”

Michele is refreshingly spontaneous in public. He shows no interest in turning into a distant persona. This is part of his personal charm and seamlessly unites the creator and his creations. What makes Gucci so hot right now, in fact, is exactly this ingénue, fresh and enthusiastic take on the idea of cool. Doing away with staid gender divides, glorifying the ugly duckling and the weirdo, proposing a take on eccentricity that is part Wes Anderson, part cultured grandma, part bespectacled style maven, Michele has turned the tables upside down, proposing an inclusive model that draws heavily from urban (sub)culture. One that makes a stylish revenge of all the beautiful losers out there. One that glorifies the past as the only way to build a different present.

If one thing needs to be said about Michele's idiosyncratic views it’s that his style is totally vintage-infected. Yet he does not come across as blatantly nostalgic. Everything is so mixed up and deliberately haphazard— think a young girl running havoc in grandma's stylish attic — that it completely eschews any precise reference: you can sense them, but you cannot pinpoint them. Yet, the clothes come with an aura attached to them: they look like they already had a life, which is indeed something a bit magic. 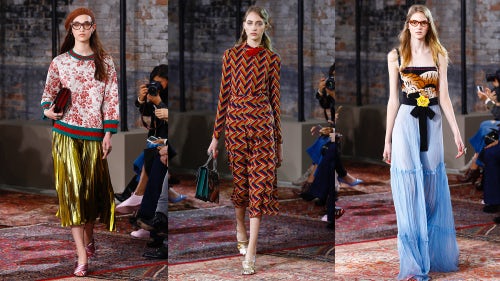 The printed chemisiers, the intarsia furs with bracelet sleeves, the pleated metallic skirts and the tattered mannish suits Michele showed yesterday actually read like an encyclopedia of the homage: there was everything in it, from Coco Chanel to Miuccia Prada and Walter Albini, remixed to the nth degree. But, what kept seducing me was the spontaneous, at times messy, mix of pieces and the sincerely fresh attitude of the girls. The fact that they entered the venue from the street added just another layer of charm.

Which brings us back to the topic of change. On the surface of things, a lot has changed at Gucci since January. Things have softened, metaphorically speaking, while quirky individualism has replaced hi-octane sexiness. Yet, the change is not essentially about design, as it is about attitude. What separates the new Gucci from the relatively old Gucci is the way things are assembled, because, give or take a crease or a ruffle, the pieces actually show a cunning continuity from one creative director to the other.

What makes Alessandro Michele resolutely contemporary, thus potentially a trendsetter, is his belief in how over what. After all, editing is the sole instrument to create the new right now. It is a new that comes from the reshuffling of the old, but it remains strong. You could probably get a similar effect delving into a vintage shop, but the Gucci label and Gucci craftsmanship make these pices truly desirable. Just think of what Hedi Slimane is doing over at Saint Laurent, with a softer, more intrinsically artisanal edge. Innovation in design, meanwhile, keeps slipping from the radar.