LONDON, United Kingdom — I’ve never been much for taking pictures but I like a new toy, which was exactly what the Polaroid Captiva was when I bought it in 1993. The photos: perfect little rectangles, developed in the back of the camera. No "shake-it-shake-it-shake-it-like-a-Polaroid-picture," needed. So for a year or so I tootled around at the shows Captiva-ting people, the one and only time I ever thought to do such a thing. It was also quite a turbulent time for me socially. The flat was a hive of activity. I took photos of all of that too. Hundreds of them in the end. And then I put them in a box, put them away, forgot about them. After all, if they were pictures I’d taken, how could they possibly be any good?

Time passes. I’m moving. I lose the box, I find the box. I open it. And it’s 1993 again. It’s usually hindsight that gives moments their weight. You’re not thinking about LIVING IN 1993 when you’re actually living in 1993. Perspective comes with 2003 or 2013 or 2023. And now that the Internet has turned everyone into a curator, you can mount retrospectives of your own perspectives. Throwback Thursdays, Flashback Fridays…. “I’d like to be a gallery, put you all inside my show.” That was one prophet, David Bowie, singing about another, Andy Warhol, in 1971. And how hindsight weighted those words — and those artists.

Anyway, back to the box. Turns out the Captiva did a pretty good job. Flicking through the pictures, I sense there are some missing. L’Evangelista is not there, for instance. Obviously, they weren’t so hidden away that the occasional visitor to my chaotic library didn’t take a lucky dip. And I was never enough of a completist to take my Captiva to Milan with me, so there are whole cities missing, not just faces.

The 1990s are a golden age, vivid in memory, just beyond digital reach.

Still, what remains is an idiosyncratic grab bag that gives a pretty good impression of who and what was happening backstage. I say “idiosyncratic” because I’m not sure many people other than me recognised Screamin’ Lord Sutch or Bernardo Bertolucci when there were supermodels changing in the vicinity. And not just changing literally, (which they were before security got appropriately draconian), but changing conceptually. 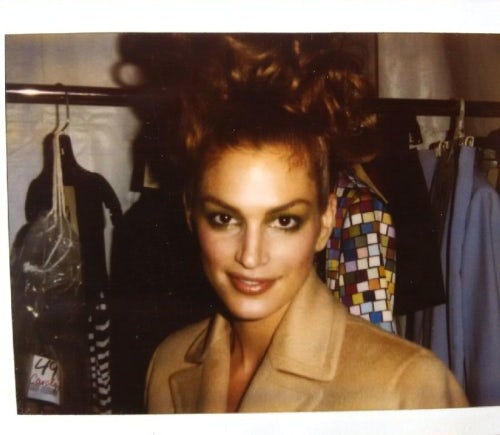 Via Captiva, I can track the code of the genus supermodelis — at least as it existed for a couple of months in 1993 — from Carmen dell’Orefice through Jerry Hall and Marie Helvin to Cindy Crawford, Naomi Campbell and Yasmeen Ghauri and beyond to Shalom Harlow and Amber Valletta. (Like I said before, key strands of supe-DNA have been “borrowed.”)

There’s a broader point to be made about the backstage congregation. It had an all-sorts aspect, which reflected the peculiar charisma of fashion in the early 1990s. Bright stars from other solar systems — rock stars, actors, artists — were drawn to the light (though, inevitably, it was the essentially incongruous presence of the likes of Connie Stevens and Tony Curtis that intrigued me). And their curiosity signposted a growing fascination in the wider world, as the fashion industry fielded a cast of characters that could satiate a media hungry for the kind of glamorous distraction Hollywood was no longer able to supply, for a while at least. What strikes me now is how agreeable everyone was, happy to stop and smile for the camera. It seems simultaneously more innocent and more grown-up than what we’ve got now.

And also more intense. I look at those old photos and I think about what came just before, what was about to come…. the vivid shades of hindsight colouring fashion’s greatest decade. The 1970s are now widely acknowledged as the golden decade in modern movie-making. Peter Biskind defined it with his book Easy Riders, Raging Bulls: How the Sex-Drugs-and-Rock’n’Roll Generation Saved Hollywood. I had to tap out the full title because I’m feeling an analogy with the fashion industry in the 1990s.

You could almost play a game and match a director to a designer, maverick to maverick. Scorsese and McQueen? A savage vision with a hint of satire. Coppola and Galliano? Spectacular scale, and a heartrending faith in the power of romance. Tom Ford? I’d probably opt for Brian de Palma, because dark, twisted eroticism coloured both their palettes. What could sharks and supermodels possibly have in common except for the instinctive crowd-pleasing showmanship of Steven Spielberg and Gianni Versace? At a stretch, Robert Altman’s humanism suits Martin Margiela. And Helmut Lang? Too bad Fritz Lang was already out of the picture in the 1970s. That connection would have been too perfect.

What strikes me now is how agreeable everyone was, happy to stop and smile for the camera. It seems simultaneously more innocent and more grown-up than what we’ve got now.

The game, contrived though it may be, underscores fashion’s potent transformation in the 1990s. It became an entertainment, a vehicle for wave after wave of unique creative visions. In 1990, I was loving Christian Lacroix. The same year, Corinne Day was photographing Kate Moss for The Face, her first magazine cover. This was the shoot that would help bring fashion’s late-80’s Lacroix-driven age of glorious excess to its knees. Fabien Baron saw the pictures, and Moss was soon Calvin Klein-bound.

The same contradictory interplay of cause and effect played out through the decade: maximalism/minimalism, indulgence/rigour, luxury/utility. There was a distinct story, a perfect span prologued by one of Claude Montana’s magisterial space operas, epilogued by John Galliano’s Matrix spectacular at Versailles. And, because for many of those years, there was no Internet relaying every tiny detail to every corner of the globe, fashion’s hermetic rituals were a magnetic combination of the contemporary and the arcane. Then, as fashion globalised, technology took over, and art, emotion and arcana were backseated by business, and, eventually, giantism and speed.

That’s why the 1990s are a golden age, vivid in memory, just beyond digital reach, ripe for sweeping generalisation. The attention recently devoted to Helmut Lang, one of the decade’s major alchemists, helps define the allure, a collision of style and substance that was unique (as unique as Montana and Versace and Galliano and Gaultier and all the others whose influence will further impress itself on fashion in the coming seasons).

And not just unique. I have a Pandora’s box of old Polaroids to testify that it’s also simply irresistible.