Katie Grand, editor of Love, talks to Colin McDowell about her career, Kim Kardashian and making a fashion magazine in the Internet age.

LONDON, United Kingdom — In years past, offices usually had a cat to keep down the vermin. The Love office goes one better. It has Bat, a floppy-eared black rabbit, who has the run of the entire space and clearly loves it. As I stroked its incredibly soft fur, I thought, "Only Katie...." And the more time I spent at the Clerkenwell headquarters of the cool, Condé Nast-backed style biannual Love, talking to Katie Grand, its creator and editor in chief, the more I thought: "Only Katie…." And it is true. As Jonathan Newhouse, chief executive of Condé Nast International has said, "She is the only editor for whom I have actually created a magazine!”

When you first meet Grand, which in my case was almost 20 years ago, she strikes you as being an unlikely person to be one of the fashion world's most important editors, whose name is often thrown around as a potential successor to Anna Wintour at American Vogue or Alexandra Shulman at British Vogue. Way back then, her unruly hair, gap-toothed smile and almost total lack of make up, not to mention her Birmingham accent and gung-ho enthusiasm, set her apart from the rest of the young fashion pack. She used to probe me with questions after some of the more difficult shows — a dynamic that, over the years, has been totally reversed.

Although she has barely changed in personality, Grand now wears Alaia, Prada, Giles and Louis Vuitton and her nicknames give a clue to the esteem in which she is held by the fashion cognoscenti, from the slightly sniping "Katie Grand a Minute" to "Lady Grand," a clear reflection of her position, both in magazines and as the stylist of shows and campaigns for the likes of Bottega Venetta, Marc Jacobs, Louis Vuitton, Prada and Miu Miu.

Although we are a print magazine, the Internet and social media are very important to us. They have to live together. One cannot exist without the other.

Brought up in Birmingham, where her father was a cancer researcher at Birmingham University and her mother (who left when she was young) a teacher, Grand never liked like school much. Even at London’s Central Saint Martins, which she attended after doing her foundation course at Bournville Art College, she was not happy. But it was there that she met the photographer Rankin and, through him, the budding editor Jefferson Hack. The three of them launched their own magazine, Dazed & Confused, a trail-blazing publication, which, as Grand now recalls, "had no structure, no budget and paid no salary. It was all totally ad hoc and on a daily basis." She loved it and stayed for seven years.

On the strength of her shoots for Dazed, Grand got work as a stylist in Italy, where she was hired to revamp the image of Bottega Venetta and asked by Miuccia Prada to "do something fun for me.” In 1999, the media company EMAP offered her the position of fashion editor at British style magazine The Face. But it wasn’t until 2000 when EMAP gave her a new magazine to run — Pop — that she truly came into her own, turning the biannual into a canvas for her unique stylistic point of view. The first cover featured Liberty Ross, Phoebe Philo, Luella Bartley and Stella McCartney, all of whom were mates.

"I think I have a very clear point of view," she says. "And I have the courage to stick with it.” While at Pop, Grand frequently chatted with Ronnie Newhouse, the art director and wife of Jonathan Newhouse, who, more than once, suggested that she should go and see Nicholas Coleridge, president of Condé Nast International, about creating a magazine with the company.

Love was born in 2009, but faced some early bumps. The magazine’s first cover — featuring a nude Beth Ditto — caused significant controversy when it hit newsstands. Some pointedly suggested that a fashion magazine should be about clothes, not nude bodies, though Grand silenced them with the riposte: "Love is not a fashion magazine. It is about style."

She could have added that in the pages of Love, there would be no wallflowers either. The Love woman is always strong whether she is a model, a television personality or a singer; Kendall Jenner or Miley Cyrus. And she gets them to do amazing things: Kendall Jenner in the latest issue of Love is photographed with prosthetic breasts and derrière. But the story that has the Internet buzzing most comprises 40 pages of Kim Kardashian wearing Prada, lensed by Steven Klein. 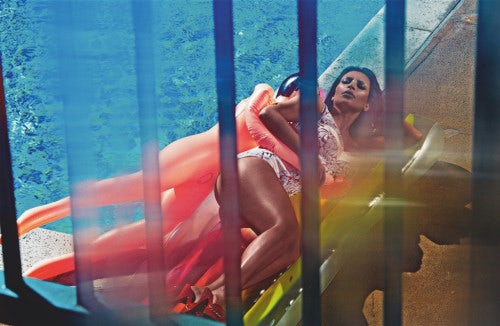 "Working with Kim, you know it’s going to be big news and even though we were very prepared, I think nothing prepares you for the magnitude of the attention she creates,” says Grand. “I'm doing the same thing I did in the early days of Pop, taking someone massive in popular culture and working with them with extremely talented people who know what they are doing. Liz Hurley and Victoria Beckham with Mert and Marcus, Charlotte Tilbury and Guido on Pop and Steven Klein and Prada with Kim and Miu Miu with Kylie [Jenner].”

Grand’s approach is carefully designed to resonate on the Internet. “Although we are a print magazine, the Internet and social media are very important to us. They have to live together. One cannot exist without the other,” she says. “We have a schedule of when the press is dropping and when to drop our Instagram and Twitter images and also to work with our website. I personally work very closely with our press officer, Mandi Lennard.”

“For the Kim images, it was important to me that the fashion images were seen before the more controversial images. Of course, you can't control the odd image being leaked once the magazine is back from the printers (like the bent over bum picture) but I wanted to show the effort Prada and I had put into the clothes and that this was a new way to see Kim. And then once the Kim and Kylie Jenner images broke, we wanted the prosthetics story to be next, as that was a comment on body image which related closely especially to Kim and the idea of a fuller figure.”

“If the prosthetics story had been the first story everyone saw it would have made no sense at all! I think about all of this when I'm putting the magazine together.”

Editor’s Note: This article was revised on 9 February, 2015. An earlier version of this article misstated that Katie Grand's rabbit was named Pat. It is not. It is named Bat. The article also misstated that Grand's father was a science researcher. He was and remains, in fact, a cancer researcher.