With fashion obsessed with creating clothes that look like they've already lived, 'Reigning Men' offers a masterclass in re-animation.

With fashion obsessed with creating clothes that look like they've already lived, 'Reigning Men' offers a masterclass in re-animation.

LOS ANGELES, United States — Once upon a time, the Los Angeles County Museum of Art was, as its name suggests, a fine regional museum, the biggest West of the Rockies in fact, which is just the kind of billboard-ready claim you might expect from an institution that is down the road from Hollywood. Then, LACMA acquired some starchitecture in the form of the Renzo Piano-designed Broad Contemporary Art Museum. Chris Burden’s Urban Light installation and Robert Irwin’s Palm Garden gave LA two dazzling new pieces of municipal art. And, most significantly, Guggenheim alumnus Michael Govan was installed as the new director, with a brief to his curators to “raise the bar high in terms of newsworthy acquisitions.”

Sharon Takeda, head of LACMA’s costume and textiles department, took that brief and ran with it, orchestrating, at one end of the scale, a multimillion dollar acquisition from the non pareil holdings of European collectors and dealers Martin Kamer and Wolfgang Ruf, and, at the other, the purchase at an East Coast auction of a genuine zoot suit from the 1940s. (Testament to the rareness of this item was the intensity of the bidding, which soared in minutes from an estimate of $600 to $900 to the high five figures.) 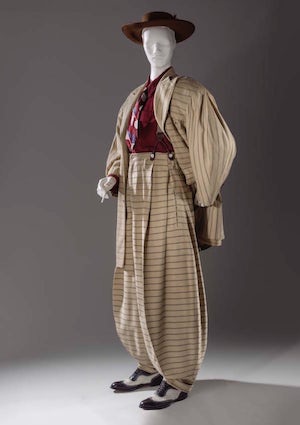 Looking like the original rapper, the zoot is one of the star items in LACMA’s Reigning Men: Fashion in Menswear 1715-2015, which opened to the public on Sunday. The institutional eye is more usually trained on womenswear, so the niche occupied by the exhibition is not a crowded one. Even so, it’s fair to say that there has never been anything like it. The 200 looks in the show offer a thematic — rather than chronological — look at the evolution of men’s fashion over three centuries, encompassing everything from lavishly embroidered Louis Quinze frock coats to black leather tails by Hedi Slimane, from woven Rajah silks to McQueen’s shimmering lava flow of metallic jacquard, from Victorian smoking caps to Gucci thongs. If it’s hardly news that the present feeds on the past in fashion, it’s still wonderful to be given the opportunity to appreciate the way an outfit from Walter Van Beirendonck’s ‘Revolution’ collection at the beginning of the 21st century is the sartorial descendent of something worn in late 18th century Paris by one of the Incroyables, the young dandies who used outrageous dress as an eloquent fuck-you to the drabness of ordinary garb during the French Revolution. Then, to keep you fully in the frame, Reigning Men goes on to display an example of the clothing worn by the sans-culottes, the working class activists who were the foot soldiers of the Revolution. And that is truly incroyable. History, words on a page, springs to vibrant life before your eyes. How such things could even exist in such pristine condition after so long is a wonderment.

Reigning Men pulls off similar coups over and over again. The most breathtaking thing in the show is quite possibly a sheer white linen tailcoat, an early 19th century American gentleman’s response to the heat of summer. It would originally have been worn over a starched linen shirt so it wouldn’t have appeared quite so transparent, but the very notion of it transcends time and trend. (There is, in fact, an echo of it elsewhere in a sheer trompe l’oeil twinset from Helmut Lang’s 2002 Homme Femme collection.)

The illusions are so perfect that you’d be forgiven for thinking you were looking at costumes magicked up for a movie. But Sharon Takeda is quick to point out that LACMA’s kinship with Hollywood is not much more than physical. Yes, the museum has a very good collection of the legendary costumier Adrian. And the grey flannel suit from Savile Row tailor Huntsman in the dandy section of the show did belong to Gregory Peck. The black leather biker gear by Langlitz is dated 1951, just two years before Marlon Brando sealed the look for eternity in The Wild One. But Reigning Men’s power derives from the fact that we’re looking at clothes, not costumes. Real people wore all this stuff at some point. That was always the obsession for collector Martin Kamer. “What did these people look like?” he used to wonder. He got his answer on opening night as he ambled through a selection of the 1000 pieces that LACMA purchased from him and Swiss rival Ruf. They have become a cornerstone of the museum’s 35,000-plus collection, and it’s Kamer and Ruf’s career-long commitment to only the best, which contributes not just to the historical depth of the new exhibition but its incredible quality. 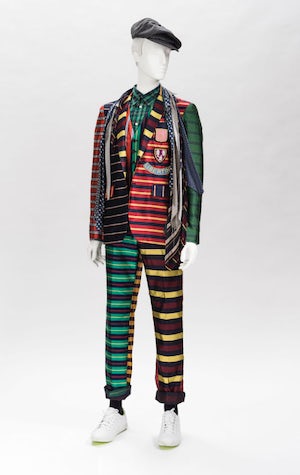 The European bias of the Kamer/Ruf collection nicely filled out the museum’s primarily British and American holdings. The symbiosis has already yielded one stellar show, Fashioning Fashion 1700-1915, but, as that title made clear, Kamer and Ruf stopped with Paul Poiret in the early 20th century. Reigning Men goes on to animate the whole lot that has happened since: soldiers, celebrities, bikers, businessmen, hippies, punks, sexual and social outlaws, plus a platoon of international design names. LA is represented by Rudi Gernreich, Rick Owens, Jeremy Scott and Johnson Hartig of Libertine. It’s also entirely appropriate that local hero Jim Goldstein, the cowboy-hatted, snakeskin-sporting real estate tycoon and basketball fan who has been a fixture at European fashion shows for years, should be in the show. He has just donated his house — the iconic Lautner property, location for countless fashion and movie shoots — to LACMA. With the house come his closets full of clothes. The Cavalli python suit in Reigning Men is just the appetiser. I’m with Jim. It feels good to give. I donated one of my old Seditionaries t-shirts. In the exhibition, it’s sensitively accompanied by a pair of tartan bondage pants.

High-profile fashion museum shows have a habit of making their presence felt on runways. It's tantalising to ponder the impact this one might have. John Galliano was an early visitor. He was full of praise for the level of curatorial detail. As an arch storyteller himself, he would surely have appreciated the conviction with which Takeda and Spilker illuminate history. But you hardly need Galliano's degree of expertise to share his response. With so many of fashion's brightest lights obsessed with creating clothes that look like they've already lived, Reigning Men offers a masterclass in re-animation.