BoF columnist Susanna Lau examines how Marcelo Burlon built a budding multi-category streetwear business based on authenticity, social media and a little help from his friends.

MILAN, Italy — “Designers are superstars. They’re often far-removed in their own boxes. I’m on the dance floor hanging out with the crowd.  People feel it’s more real.” And in one handy metaphor, Marcelo Burlon sums up how, today, a combination of authenticity and social media can help build a young fashion brand seemingly out of nothing.

Originally from the Patagonia region of Argentina, Burlon moved to Milan 22 years ago. He fell into PR, started DJ-ing and galvanised a city not known for its party scene with his club night 'Pink is Punk', drawing designers like Raf Simons and Riccardo Tisci into his circle of friends. “People wanted my mailing list, as I would put together all the cool kids in Milan — creatives, street artists,” he says. “It was a very interesting mix of people. Designers wanted me to organise their parties.”

Designers are superstars. They’re often far-removed in their own boxes. I’m on the dance floor hanging out with the crowd.

In late 2012, Burlon launched a simple line of t-shirts that would become a uniform of sorts for his cultivated gang. “We wanted to be recognised as being part of something, represented by symbols that were personal to us,” he says. Key motifs inspired by his native Patagonia and '90s club culture, including a bird’s wingspan and serpents snaking around the neckline, were chosen and placed on t-shirts in collaboration with graphic designer Giorgio di Salvo. In their first season, purely through word of mouth, they sold 10,000 t-shirts to 90 stores, no small feat considering that one of their t-shirts retails for about €160 (about $217) a pop. County of Milan was born. 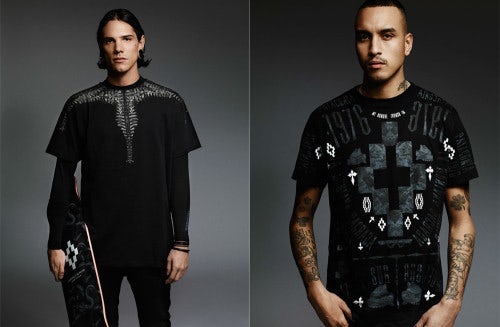 With support from Milanese retailer Claudio Antonioli, who looks after the commercial side of the business, and Davide de Giglio, who oversees production, the County of Milan label currently turns over €9 million a year and is stocked in over 250 stores around the world, including influential retailers like Opening Ceremony, Lane Crawford and Harvey Nichols. The brand has also expanded into new product categories — including swimwear, bags and sneakers — and has collaborated with the likes of Eastpak. What’s more, the company now provides production capabilities to Off-White, the streetwear label designed by Kanye West’s creative director Virgil Abloh. And, tomorrow night at Pitti Uomo, they present their first formal show, promising to shake up the suited and booted crowd known to frequent the Florentine trade show.

“There’s a new kind of streetwear emerging and you can see it in brands like Hood By Air, Off-White, Pyrex and Pigalle,” says Burlon. “We all know each other and there’s support for each other. It’s like a new movement.”

London department store Selfridges was one of the first major retailers to buy County of Milan’s menswear and soon found they were selling out of pieces in smaller sizes — largely bought by women — and decided to buy into the brand’s womenswear as well. “He's quite known in the fashion industry,” said Lydia King, buying manager for denim, contemporary and casualwear at Selfridges, identifying a key driver of Burlon’s success. “Lots of customers knew who he was. It's quite unusual that a brand that is fairly unknown press-wise has had such a good sell-through. His t-shirts are quite edgy and a bit masculine, especially the one with the snakes all over it and the one with feathers and wolves. Plus there’s the cool of having found them in the menswear department.” 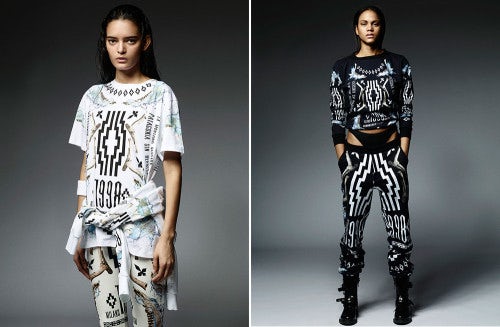 Star power has also contributed to County of Milan’s success. Sports figures LeBron James and Lewis Hamilton and a whole roster of musicians like Pusha T, Drake and A$AP Rocky have all regularly worn County of Milan clothing. Though Burlon insists none of these were seeded by the company and that the celebrities who wear his t-shirts all bought them through their own personal shoppers, some of them have shown their support of the label via social media and various product partnerships.

Earlier this year, LeBron teamed up with County of Milan to produce a collaborative t-shirt, emblazoned with a lion, and modelled it himself in a look book shot by Terry Richardson. Pusha T launched his own ‘County of Pusha’ range earlier this year to sell-out success. County of Milan is also currently involved in a wider collaboration between New York department store Barneys and NBA player Russell Westbrook.

“There is a culture behind it. It's about belonging to a gang, a lifestyle or a tribe. When you see a #CountyofMilan you recognise that it’s connected to something more.” This tribe has grown immensely since the launch of Burlon’s first line of t-shirts. “When I started, I wanted to promote the t-shirts through Instagram. I had 500 followers. Now, it’s over 100,000.” It’s not a huge number compared to bigger brands, but when it comes to social media engagement, Burlon stresses quality over quantity. “I always go through pictures, commenting on things County of Milan fans have posted. I'm super easy. I like to make them happy and it's very natural for me,” says Burlon, who is more brand architect than traditional designer.

“The way I show and share my life with people is a bit unusual and that’s part of the success of the brand. There’s so much love and possibility surrounding the brand on the Internet.”