How a dialogue between Miuccia Prada and Christophe Chemin turned his artwork into the in-the-know seasonal signifier of Prada’s Autumn/Winter 2016 collections.

How a dialogue between Miuccia Prada and Christophe Chemin turned his artwork into the in-the-know seasonal signifier of Prada’s Autumn/Winter 2016 collections.

PARIS, France — The relationship between artist and fashion designer dates back nearly a century to the bohemians of Paris’ cafe society in the 1930s and 1940s: Marcel Vertès imagined whimsical prints for Elsa Schiaparelli’s designs, while Salvador Dalí accented them with zany hats and opulent perfume bottles. Since those libertine days of free-for-all collaboration, the fashion industry has assumed the art world as a fair-weather friend, picking and choosing from its boundless creativity to realise — and add value — to everything from capsule collections to boutique installations.

But fast-forward to 2016 and yet another artist collaboration could induce an eye-roll from even the most enthusiastic fashion follower, accustomed as we are to seeing the output of the constant exchange between artists and their fashion friends on scarf prints, jewellery, store furniture and other such elements that help lend their brands a sense of individuality. Be it Marc Quinn’s leaf sculpture at the Alexander McQueen Spring/Summer 2015 show or Takashi Murakami’s Louis Vuitton handbags, many of these pairings have had the common thread of mutual fame, a fact that makes Prada’s latest choice of collaborator all the more subversive and intriguing.

Beginning with the invitation for her men’s Autumn/Winter 2016 show in January and unfolding across both men’s and womenswear for the season, Miuccia Prada and her design team plucked Berlin-based Frenchman Christophe Chemin out of near obscurity to create ink and pencil illustrations based on an evolving dialogue between the artist and the fashion house.

Whilst this is far from Chemin’s first interaction with the fashion world — Chemin has previously worked with Ann Demeulemeester creative director Sebastien Meunier on performance art pieces in Paris — it is certainly his most public and intensive one, for which he put all other projects on hold since December last year. 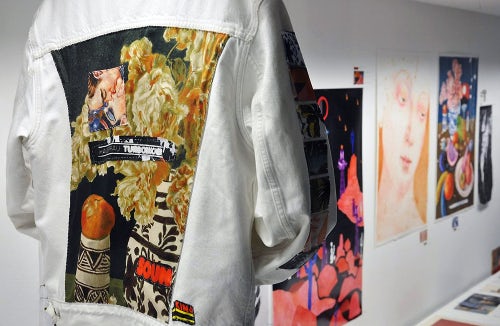 For the men’s show, these works delved into the classical concerns of European mythology and art history, entwining the symbolism of Greek gods and goddesses with Giotto-style still life works, a Fassbinder-inspired fake movie poster ‘Impossible True Love’ and a dystopian fantasy of Noah’s Ark. Displayed across 1950s style short-sleeved cotton bowling shirts and baggy sailor shirts, with collars unbuttoned and askew, they set the tone for the women’s show, one month later, when more artworks came applied to similar shirts (cinched by laced corsets) or patched onto shift dresses, full skirts and a pair of brocade overcoats.

The second round of Chemin’s designs took a more focused approach: he chose six months from the French Revolutionary calendar and brought them to life in vivid colour. At the collection ‘re-see’ a day after, editors were given the opportunity to examine the designs up close, where they discovered hand-scrawled titles like ‘Fructidor’, ‘Floréal’ and ‘Pluviôse’ — each linked to the harvest, the weather and the seasons. One design even replicated the eye-shaped tattoos on Chemin’s own fingers.

“The artwork was done from the beginning with the knowledge that it would end up being used on clothes,” Chemin says. “I don’t like the word “prints,” because they are not “prints” — they are artworks that I related to Miuccia’s visual universe and vocabulary, mixing very personal obsessions of mine with ideas that were directly inspired by her. If you look [at] them up close, there are a multitude of Prada references that I incorporated and played with. There was this consciousness of doing something specifically for her: a direct inspiration. For me, it was an extremely emotional experience to see the artwork on the clothes: used, reframed, layered, cut out and patched. The results are very dense and complex, but still accessible. The clothes are extraordinary.”

That those clothes are extraordinary may be the artist's subjective opinion. And while it may ring true, it's perhaps secondary to Prada's concern of creating memorable and covetable signifiers that serve as a visual signature for the season — identifiable to in-the-know fashion followers, but much less obvious than anything like a logo — as well as sustaining the brand's relevance in the circles of art, design, architecture and film. Whilst few previous collaborations have touched the clothes themselves (the Spring 2014 'In The Heart Of The Multitude' collection with illustrated skirts and handbags remains an exception), Prada has implicated a slew of artists in more abstract ways, from ephemeral events such as Francesco Vezzoli's ‘24h Museum’ in Paris (2012) and the pop-up Double Club space by Carsten Höller in London (2008 to 2009) to multimedia projects including films by both Wes Anderson and Roman Polanski. The perpetual partnership with Rem Koolhaas' OMA/AMO design agency is yet another relationship that continues to legitimise Prada as the most intellectual and multidisciplinary brand in fashion, acting as co-guardians to the seasonal canon of projects of which Chemin's work is now a part. 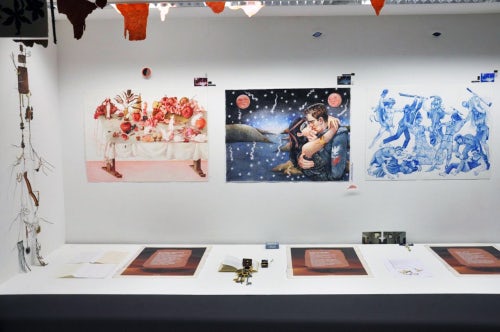 The layers of meaning embedded in Chemin’s creations are many, a fact that stems from the creative process he undertook with Miuccia Prada and in-house designer Fabio Zambernardi, who first contacted the artist via Instagram. Rather than providing samples and sketches, Chemin embarked on a complex, philosophical text-based exchange with the pair, one that is displayed in full as a part of an exhibition currently on show at 032c magazine’s headquarters in St. Agnes, Berlin. Entitled ‘Keep Your Daisies For The Cold Days’, a reference to the last word spoken in Pasolini’s Salo (1975), the solo show groups Chemin’s original artworks for the Prada collaboration with the series of texts (themselves depicted as poems and artworks) and other paraphernalia related to the project. “It feels very natural, like a continuation. It is the ‘suite’,” Chemin said of the exhibition, which runs until April 25. “Also, it is very democratic to put the original artwork out there for the people to be able to see and experience it. It exists in a physical way. It is not about buying the clothes or not.”

The organic inception of this exhibition is what distinguishes it from the multitude of ‘experiential’ fashion happenings that have become crucial marketing opportunities for megabrands. Unlike Chanel’s Little Black Jacket or Louis Vuitton’s travelling campaign exhibitions (Series 1 to 4 unfolded with star-studded celebrations across the globe), the show boasts no direct affiliation with Prada, financial or otherwise. In this way it becomes an exceptional example of independent media appropriating and extending the content of a fashion show in an artistic context, allowing an audience to discover the truly profound exchange between two very different creative entities — people whose worlds would have never collided if not for Mrs. Prada’s sense of curiosity and an element of risk.

“We have a neurotic relationship with the whole art/fashion complex,” explains 032c magazine’s founder Joerg Koch. “So Christophe’s exhibition is almost a case study of what happens when an artist is deeply integrated in the process and there is an actual critical engagement with his work by the fashion designers. The brand happens to be Prada, but the exhibition happened without their involvement.”

That said, Prada’s relationship with Chemin has not yet come full circle; the house is currently strategising an ambitious multimedia project to unite the two collaborations as one entity. “We will sum up everything that we have been doing with the men’s and women’s shows as a poetic gesture — the end of a cycle,” said the artist. With Instagram credited as the link between the two, we’ve little doubt that Prada’s 7.5 million followers will be privy to more details of the project soon, just as the autumn collections hit stores.