NEW YORK, United States — In search of alternatives to the New York Fashion Week establishment, it’s not uncommon to find yourself in little Lower East Side galleries, burlesque clubs or even aboard boats, taking in the work of fledgling labels that may not even think of themselves as fashion designers in the traditional sense.

The faint movement of a few seasons ago has grown, thanks in part to social media dissemination as well as increased interest from both press and buyers. And the stray forerunners, who decided to strike out on their own, have inspired a rising wave of emerging designers, emboldened by the feeling that New York can indeed be a place where ‘new’ can emerge. “I think it comes in waves and cycles,” said Ruth Gruca, global fashion director of Made, a platform for emerging fashion talent. “In past seasons, I felt the energy was low and now I’ve seen that excitement again in New York. There’s a lot more rogue fashion shows and underground things going on.” 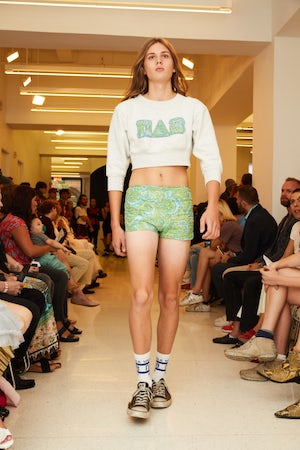 The central nucleus of New York’s emerging fashion scene is undeniably Eckhaus Latta, the label helmed by bicoastal art school graduates Mike Eckhaus and Zoe Latta. Their rise has been steady but significant, and their latest show, staged outside in a park on the Lower East Side, was packed, despite the sweltering heat. The designers recently reached an important milestone with the opening of a standalone store in Los Angeles, which has, in turn, brought maturity to their work. This bodes well for emerging New York designers following in their footsteps, like Gauntlett Cheng, LRS, Barragán, Gallery 909, Bror August and Vaquera, who have all emerged in quick succession, not necessarily sharing common aesthetic ground, but fuelled by a shared belief that raw-edged garments (both in terms of finish and spirit) and clothes imbued with a down-to-earth organic realism can garner attention. “Eckhaus has been a really important brand for New York City,” said Gruca. “They’ve really shaped this new wave. People like Gauntlett Cheng, for instance, who were former interns [at Eckhaus Latta], have taken what they learnt and are doing their own thing.”

The randomness of the inspiration points behind the clothes is also something of a pull for the alt crowds that flock to these shows, be it the nostalgic look at skate culture at LRS, the wry take on Ivy League dressing at Vaquera or Carrie Bradshaw’s early “Sex and the City” looks at Bror August. The goal here isn’t perfect garments, but instead a mood and energy that goes against the grain.

In past seasons, I felt the energy was low and now I’ve seen that excitement again in New York.

Fashion schools in New York have also played their part in creating an environment where designers feel they can strike out on their own. “I’ve seen Parsons encourage designers to go out on their own, especially from their MFA programme,” said Gruca. 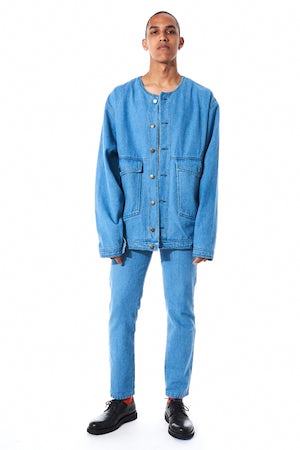 But New York’s new wave is anything but uniform and many of the city’s emerging designers resist traditional labels. Telfar Clemens, for instance, prefers not to link his clothes with conventional categories like womenswear, menswear, sportswear or streetwear — though the latter two terms do inevitably dog his utilitarian pieces. Some of these designers prefer not to be referred to as fashion designers period. 69 is an anonymous Los Angeles-based collective which shows in New York and presented its printed denim pieces on a group of lookalikes in a send-up of celebrity culture. In a collective statement, the group said: “We have this freedom to do special projects and collaborations with artists. This is a big art project and the clothing is the most successful component of it. We’re not bound to fashion though.”

Beyond the semantics of labelling, this reflects these young designers' desire to work with a wider range of formats and mediums, whether it’s selecting more offbeat venues, working with specific musicians to soundtrack their shows or choosing different ways to present their clothes. Chromat, for instance, which is known for its promotion of diverse body types paired with progressive bodywear, worked with digital artist Pussy Krew to incorporate bodyscanning, motion capture and dance choreography into its presentation, bringing a digital slant to its output. Meanwhile, some of New York’s new wave prefer to make the sort of noise that makes their shows a riot to watch. Rio Uribe of Gypsy Sport mixed club kid vogueing and satirical sports-style ‘play-by-play’ commentary into his latest show, earning him bonus points with the audience.

But whilst the infectious energy and left field approaches of these young designers are inspiring, two of New York’s bright young things, Shan Huq and Vejas Kruszewski (who won the runner-up award in this year’s LVMH Prize) are taking their collections to Paris. An email from Shan Huq’s team read: “After the designer’s last visit to the city, he’s reached the conclusion that the city aligns perfectly with the brand’s viewpoint and philosophy.” How New York’s young designers will fare in the world’s undisputed fashion capital is another story altogether.