In Paris, Ambiguity is in the Air

This season, the Paris men’s shows were marked by ambiguity and a kind of liquid-like morphing across seasons, genders and forms, reports Angelo Flaccavento.

PARIS France — Delicate, decadent, covered-up — a thread of ambiguity ran through the Paris men’s collections during the exciting fashion week that closed Sunday. The visions that materialised on the catwalks kept you wondering: is it winter or summer, homme or femme, predator or prey, urban dweller or escapist, functional or decorative? Of course, these unresolved binaries are just what caught this writer's eye, but there were many more, the truth laying firmly in the eye of the beholder.

The visions that materialised on the catwalks kept you wondering: is it winter or summer, homme or femme, predator or prey?

In today’s hyper-saturated, ultra-fragmented landscape, talking about trends is, frankly, pointless. There are almost as many possibilities available as there are designers. And everything is happening at once, the atomising and unbundling power of digital having replaced the universal with the personal, while doing away with history and the very notion of linear chronology. It might all look a bit discomforting, even a tad confusing, but it's also one of the advantages of contemporary visual culture: you can be whoever you like, in the flip of an outfit, with no strings attached. Dominant trends are part of old world thinking, together with diktats, uniformity and the idea that a summer wardrobe should not include a coat.

There were coats for Spring-Summer 2015 on the catwalks this season — plenty of them, together with multi-pocketed parkas and blousons, multi-purpose hooded vests, ponchos and blankets (both at Loewe and Saint Laurent, throws looked particularly appealing) sometimes layered one on top of another, possibly to accentuate the idea of protection and functionality, to suggest the idea of metropolitan nomadism and adaptability to every situation. Functionalism has loomed large, because our lifestyle requires it. And, now, technical and tailored are merging and morphing. 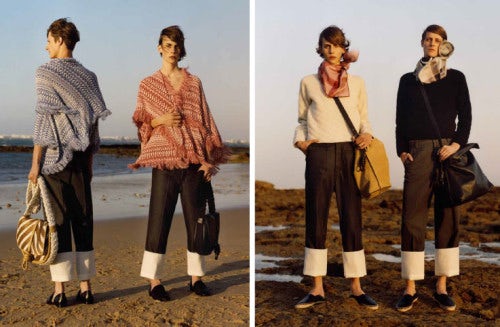 Global climate change has helped to upend the idea of clearly defined seasons, but it’s not just the possibility of having winter in July (as suggested by the gloom and rain of the closing days of Paris Men’s Fashion Week) and sudden summers in February to which designers are reacting. Collections filled with trans-seasonal items may well, in fact, stem from more commercial considerations.

The clothes we saw on the runway last week will hit the shop floors in the dead of winter, around Christmas or right at the beginning of the new year. Linen jackets and gauzy tees would feel out of place at that time and a hard sell for potential consumers. Many customers own everything already. The only thing which might actually ignite an urge to buy is the immediate satisfaction of desire, which means the possibility to actually wear what they just bought: buy now, wear now. Today, no one, apart from diehard fashionistas and helpless fashion victims, buys a swimsuit in February in order to wear it come June.

Fashion has a wonderful way of adapting to new realities. And as everything gets faster and faster, the old system of shows staged twice a year, with clothes presented six months, or, in the case of menswear, almost one year before they hit stores, seems frankly outdated. Fast-fashion is much more in sync with the rhythm of the contemporary world, which, together with low prices and responsive production, largely explains the success of the model. Of course, comparing fast-fashion to designer fashion is difficult, as the two having radically different approaches. Yet, in order to survive, designer fashion must adapt — and opting for more liquid seasons is a good way to do so. It's also a way to fill shops, at any moment of the year, with an all-encompassing offering that communicates the same vibe, while working in a variety of climates. From light to heavy clothes, you will always find something that suits your needs, in any boutique, from New York to Dubai, Milano to Singapore.

The shop floors are also replete with clothes that, increasingly, show no real gender distinction, working perfectly well on both men's and women's bodies, the differences between the two rendered less and less apparent, not least by rising global interest in an active, healthy lifestyle. Paris included plenty of gender-neutral pieces, and indeed collections, like Saint Laurent, which featured almost as many women on the catwalk as there were men, or others, like Loewe, which were deliberately genderless. Men looked delicate, most of the time, even when they appeared as merciless seducers, as in Dries Van Noten's Rudolf Nureyev-meets-Rudy Valentino fantasy, or theatrical and decadent, as in the body-painted, sashed and draped Rick Owens fauns, or Comme des Garçon's anti-war anti-heroes in pleated skirts and absurd shoes. 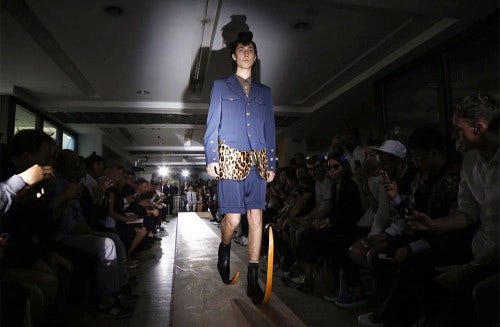 They embraced their softer side — feminine, by old cultural standards — without coming across as effeminate, which marks a quantum leap for culture. This is fashion for men rid of old insecurities about gender representation. What is taking shape is, in fact, not at all an idea of fey or gay masculinity — the influence of the gay aesthetic on the heterosexual world is firmly confined to the gym-buff, clone look — but the idea that delicacy and gentleness are qualities of contemporary men worth being considered as a sign of strength, not an expression of weakness. Which, if you like, is just another ambiguity.

Whichever way you approach the current state of Parisian menswear, what's clear is that old categories and clearly marked divisions are being blurred in favour of liquid morphing. This is exactly what made the season so exciting: the lack of dogmatism. Truth will be in the eye, and hopefully the wardrobe, of the beholder.