Rebooting Escada for a New Era

Tim Blanks gets a first look inside the reinvention of the former colossus ahead of its New York Fashion Week debut, designed by Niall Sloan and brought to life by a dream team of Pat McGrath, Guido Palau, Jacob K, Frederic Sanchez and Stefan Beckman.

Rebooting Escada for a New Era

Tim Blanks gets a first look inside the reinvention of the former colossus ahead of its New York Fashion Week debut, designed by Niall Sloan and brought to life by a dream team of Pat McGrath, Guido Palau, Jacob K, Frederic Sanchez and Stefan Beckman.

MUNICH, Germany — There was a time long ago when Escada bestrode the fashion landscape as a commercial colossus, broad of shoulder, jewelled in tone, suited for the power that was newly bestowed on women by the corporate boardrooms of the 1980s. Princess Diana was a fan. Kim Basinger won her Oscar in Escada. Founders Margarethe and Wolfgang Ley turned their Munich-based business into a global dynamo. At one point, it was allegedly the largest ready-to-wear business in the world. Revenues topped $800 million in 1991, the year before Margarethe died of cancer. She was Escada, not only the designer but also the physical embodiment of the ethos. After her death, it was all downhill.

Still, when something is so quintessentially of its moment, there’s a good chance that, should that moment once again insinuate itself into the conversation, that something will rise again. So it is with Escada, which lands on New York Fashion Week on Sunday to celebrate its 40th anniversary with the kind of dream support team that suggests little is being left to chance. Pat McGrath and Guido Palau are in charge of the look, Jacob K is styling, Frédéric Sanchez is soundtrackist, Piergiorgio del Moro is casting the show and Stefan Beckman has designed a spectacular set for the Park Avenue Armory.

The deep pockets belong to Megha Mittal, of the Indian steel dynasty, who acquired the insolvent brand in November 2009. Iris Epple-Righi, her chief executive since September 2016, trails years of experience with Tommy Hilfiger and Calvin Klein. The missing part of the puzzle was Niall Sloan, the young Irishman they brought on in August 2017.

They went out on a limb to entrust a guy coming in from a rubber boot company with this luxury label.

This will be his second full collection for Escada, and even though he has a solid pedigree — a BA from Central St Martins, an MA from the Royal College of Art, 10 years at Burberry mentored by Christopher Bailey at Prorsum, followed by three years at Hunter, famous for its wellies — he is the Factor X, something he acknowledges when he says: “They went out on a limb to entrust a guy coming in from a rubber boot company with this luxury label.”

But Epple-Righi says it was precisely that gamut of experience — from Prorsum's luxury to Hunter’s great outdoors — that made Sloan so appealing. And there was also the mysterious little matter of a job foretold. 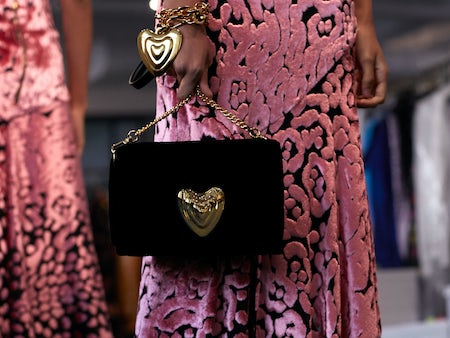 During his years at Burberry, as the design parameters became more and more defined, Sloan says he acquired an appetite for quirk. One image that really caught his eye came from an Escada campaign in the '80s: Gail Elliott and Gisele Zelauy, one of them in a baby pink, sequinned quilted jacket and mint green chinos, the other in the same outfit with the colours reversed, both wearing one pink shoe, one green and baroque silk shirts. “That looked like the promised land to me,” Sloan remembers. “If you could make that, you could make anything.”

He reassured his downcast assistant after one particularly trying stretch, “Don’t worry, one day I’ll be creative director of Escada.” So, when the headhunter came calling years later, Sloan said yes. “If it had been a different brand, I mightn’t have entertained the offer, but I’d made that weird prophecy to myself.”

He was born in 1981 so he’s not strictly a child of the '80s, but Sloan feels he understands Escada’s appeal to that decade. First, there was a very deliberate globalism, defying the parochialism that largely defined the German fashion industry. “Even though they were a German company, they wanted to represent themselves as international, and Margaretha was very much bringing everyone along for the ride. There was a democracy in what she wanted to do.”

Next, there was the Leys’ recognition of the conversations around equality at the time. “There’s this sense of a woman making her way in a man’s world at a time when shoulder pads were armour, but Escada had this lightness and femininity that said, ‘It doesn’t matter if I’m wearing a pink and white gingham tweed jacket with cupcake buttons, I’m CEO of the company and what I say goes’.”

Sloan’s challenge is obvious and formidable: how to reposition Margaretha’s sensibility for another era. He insists he’s unfazed for a few reasons. “This is a moment in fashion when people are referencing the stronger aspects of pop culture and a lot of the Escada stuff is very arresting.” True, Marc Jacobs showed a collection last season that drew on some of the designers who helped define the '80s, so Sloan may have tapped a vein. He’s also convinced that a surprising number of young people have a perception of Escada, due to their mothers or aunts or other memories of sophisticated women from their childhoods. “People love what Escada was,” he claims. 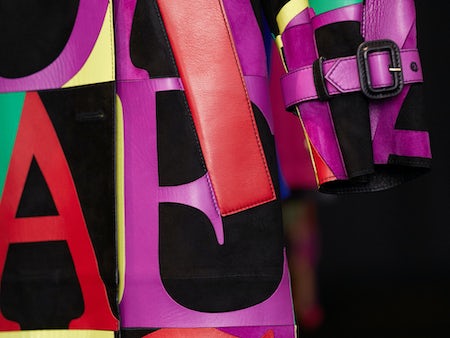 Sloan is certainly ready to refresh those memories. “I’m still feeling my way through it, I didn’t want to propose the brand as a new concept,” he says, but he’s found a fundamental compatibility between Ley past and Sloan present in a shared love of colour, print and embellishment.

With the prints, he wanted to inject an element of surprising whimsy drawn from Escada’s history. The Leys were at a racetrack in the late '70s where they backed a horse named Escada (the word is Portuguese for “staircase”). Presumably it won, because that’s what they called their brand. The racing motif features throughout Sloan’s spring collection, in pieces that reference the stripes and spots of jockey silks, in racehorses printed and woven, or even embroidered across the breadth of a coat.

The dominant silhouette — shoulder pads and dolman sleeves — is a reminder that the crux of the collection is tailoring, though Sloan is showing his power pant suit with a slightly looser construction (and it’s paired with sneakers). The other trips to the archives have yielded abstracted windowpane checks and houndstooth patterns in ice cream-y shades, and an animal print devoré-ed on a bias cut velvet dress, which misses Studio 54 by a mere 40 years. Sloan adds his own twist to the Escada era with a polka-dotted brown silk dress just like the one Julia Roberts wore to the races in “Pretty Woman,” one of his favourite movies. (Vivian Ward would definitely have flashed cash in the Escada boutique on Rodeo.)

I’m still feeling my way through it, I didn’t want to propose the brand as a new concept.

As far as movies go, that’s a pretty iconic look, and it was icons that Sloan felt Escada was lacking. He thinks he may have found the answer in an abstracted heart motif that Margaretha used but never really took full advantage of. “We can own it,” he says confidently. It’s throughout the new collection, as a print, as a buckle, as the charms hanging off a belt.

Sloan is equally bent on giving the Escada logo the same kind of signature recognisability for the company that the check has for his old employer. It certainly looks possible in a black suede trench (an item he is obviously intimate with after his decade at Burberry) on which Sloan has bonded the Escada lettering in different coloured leathers. The coat has a graphic impact reminiscent of Robert Indiana’s famous Love painting. By way of extreme contrast, the same logo in a pale tone-on-tone jacquard reads almost as a camo print.

Musing further on icons, Sloan mentions that what always inspired him about Diana was the way she used her style to reinforce positive change, and that is an aspect of Escada he feels is more relevant than ever. “I feel it’s that moment again where women are saying enough is enough.” And, with Escada’s female owner and chief executive, Sloan adds, “I’m surrounded by women with a strong point of view.”

He dreams of Solange and Zendaya in his clothes, but he can also see Iris Apfel in them. In a church that broad, Sloan hopes Escada will find a new congregation.