LONDON, United Kingdom — Summer reads are often thought to be light, breezy fare — much like the clothing for the season. But why not take the opportunity this summer to dive into fashion’s rich history?

Wherever your chosen reading locale — beach, park bench, airplane, a chaise lounge in an air-conditioned living room — there are a number of books that lovers of fashion must not miss, from ones that explore the momentous impact of Charles James, dubbed as America’s first couturier, or Marc Bohan, the creative force behind Christian Dior's most iconic collections for three decades.

Below, BoF columnist Colin McDowell recommends the summer books that delve into fashion’s past, which has become more critical to understand than ever in order to find success in its future.

Unlike many modern designers, Marc Bohan, like Dior himself, wanted his clothes to serve women, not the other way around. He understood beauty but felt that extravagance had to be commercially viable too. For him, the formula was simple: to reflect the times but not exaggerate them. 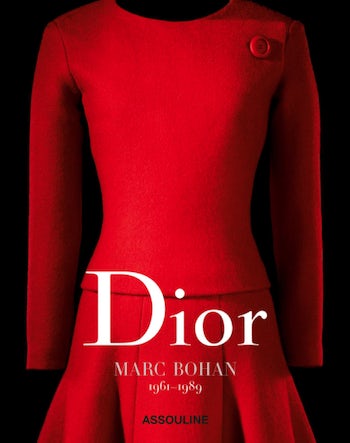 He was the archetypal steady pair of hands, always interpreting with due deference the cahiers of drawings left by Dior. They were his jumping-off point but Bohan knew that as well as preserving the spirit of Dior, his job was to move it forward during very difficult times for high fashion — times in which the world was rapidly changing and ready-to-wear was becoming a key driver of that change.

Bohan admired Dior and was aware that his role in the world’s most famous high-fashion house was to reinvent it for his times without ever forgetting its foundation. It must have been an awe-inspiring situation to be in. He was, after all, stepping not only into the shoes of the man who had changed fashion almost overnight with his tritely labelled “New Look,” making even other couturiers follow him as if he were the Pied Piper of the fashion world, but also coming after the boy wonder of Paris, Yves Saint Laurent, who Dior had personally chosen as his successor and who was loved as the saviour of Paris couture.

These were hard acts to follow but, as this book demonstrates, Bohan had the experience and a level head to do so. The story of his tenure is told in photographs of his major triumphs over the years accompanied by explanatory text. Assouline are to be commended for this splendid volume and it makes me eager for them to continue the Dior survey with other designers who followed on from Bohan.

Creative people are often insecure. For every one with the courage to ignore the competition and get on with fulfilling his genius, there are many who play a worried game of "Mirror! Mirror! on the wall, Who is the fairest of us all?"

But there are other ways of dealing with creative insincerity, the main one of which is to smother it with denial. Charles James was a classic case of creative artistic insecurity syndrome. He refused to admit that there might be other couturiers as good as he, and certainly none better. So, when he said, “I am what is regarded as the greatest couturier in the world,’ it served as a reminder to people who might have forgotten that fact, including possibly himself. 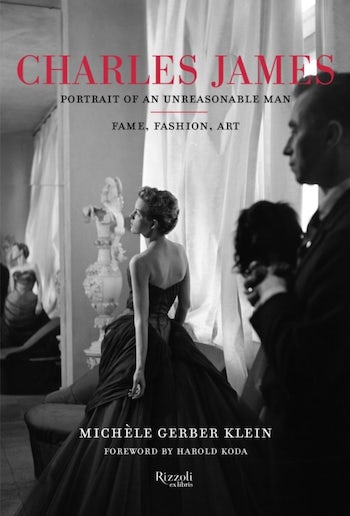 He was, after all, a man paranoid about how the world — and posterity — would assess him.

Disputing, quarrelsome and such a perfectionist were the customers who ordered dresses from James. Often, after putting down a hefty deposit, they found delivery dates ignored, pleas falling on deaf ears and the event for which the garment was planned to be worn long gone before it finally became theirs. Yet, the richest women in American society nearly always put up with his cavalier approach and frequently continued to re-order dresses from him, regardless of uncertainties.

Now, following the 2014 Met exhibition cataloguing the work of this quixotic, self-absorbed and viciously tongued genius, we have a story of his private life, quarrels and triumphs in a biography that looks at the man more closely than at the clothes. An added bonus is a short but sharply insightful foreword by Harold Koda.

The book begins with James’ privileged life in England as a boy. His father was part of Edwardian society; his American mother was a prominent philanthropist. James was spoilt and cosseted by his mother, while his father was a sadist who beat his son when he was as young as four. As a teenager he was described by a family friend as ‘obnoxious.’ Sent to Harrow, he met and became a great friend of Cecil Beaton. But it was a bad match. Both were hyper-critical, over-sensitive and rarely loyal. Beaton was dubbed “Malice in Wonderland,” apparently by the French poet and artist Jean Cocteau, and James was endlessly using litigation to revenge what he saw as betrayals, deceits and wilful attempts to destroy him.

As this very readable account makes clear, James was admired by all as the world’s greatest fashion creator. Everybody who was anybody, from Paul Poiret to Antonio Lopez, who at some time crossed Charles James’ path, all have vivid memories of him, which is why this book is such a page-turner. The most telling thing of all is that both Christian Dior and Cristobal Balenciaga acknowledged his greatness.

This is a doorstopper of a book: 720 pages. But what marks it out from other books about one of the world’s greatest 20th century photographers is that, unlike them, it has no high-gloss Avedon pictures and its only illustrations are snapshots from personal albums.

This is as it should be. That’s because this is, as the title suggests, a very intimate portrait of Avedon's private and public life, more than his obsession with creating images unlike any before them. And, in that, Richard Avedon (known to his friends and intimates as Dick) has a career that can only be called outstanding and indeed stellar. It isn't just the quality of the images or the perfection of the printing that are impressive in his work. It is the range of subjects and situations that attracted him throughout a long and very active career. 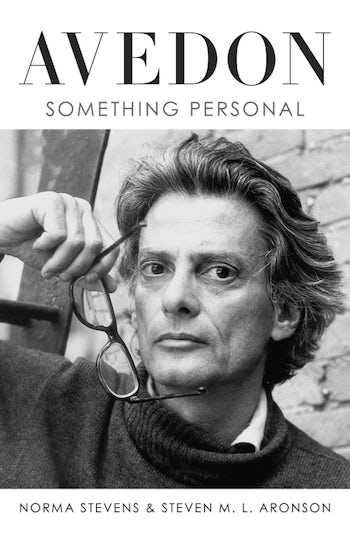 His fashion pictures for Vogue and Harper’s Bazaar are well known for their glamour, wit and sophistication. Nobody could dispute his eminence in those areas. But in the 40s and right up to his sudden death in 2004 while on a fashion shoot, Avedon had to share the honours, especially in the 50s and 60s — arguably the last periods when fashion was idealised, glamourised and sophisticated — not only in the salons of the designers, but on the covers and in the contents of the glossy styles from Paris and adapted for the market by the brilliance of 7th Avenue.

The person with whom he was in constant envy was the other great mid-century fashion photographer, Irving Penn. “Something Personal” makes very clear that Avedon was always chasing his rival and never quite catching up.

Co-author Norma Stevens was Avedon’s business partner and one of his closest confidantes for over 30 years, so much of what she writes has the ring of truth — she was by his side, helping with all aspects of the Avedon business at all crucial points in that time, including at his deathbed. Many of her insights, gleaned through years of daily contact are shrewd and apposite. But her method is to write in his voice for much of the time and this, for me, seemed excessive. Unless Stevens has absolute total recall over 40 years or had a tape recorder hidden on her person, many of the conversations, treated as the actual words spoken, seem, at best approximations rather than transcripts of the conversations they both had.

“Something Personal” can be seen as the memorial that never was, in that many of Avedon’s friends and team members who would have spoken at the service have written about their reminiscences of working and socialising with him. They include Calvin Klein and Brooke Shields for whom Avedon photographed the famous jeans advertisement, Jerry Hall and Cindy Crawford, Twyla Tharpe, Donatella Versace, Isabella Rossellini and many more.

This is an emotional book and perhaps at times slightly OTT. It positions Avedon as a great fashion photographer but apart from Irving Penn, how does his work stand up to that of other major 20th century photographers such as Horst P Horst or Steichen? Paul Strand or Robert Capa? Bill Brandt or Dorothea Lange? There is a lot of competition out there and the judges are still out, but in my view, Richard Alvedon’s flaw was that he wanted to be photography’s polymath and Victor Ludorum in every field. He wasn’t, but he got very close.

Pretty Gentlemen is welcome because it is a rarity among books concerning costume. It bucks the trend so common in those written by academics in that the prose dances along effortlessly in a way that frequently almost reads as a novel by Jane Austen. And that makes it almost unique in scholarly works on any era and its dress.

The pretty gentlemen of the title are the Macaronis of 18th century London who, although a small coterie, had a considerable effect — and even to a certain degree, influence — on their fellows. Although they were not the first to dress fancy, they were among the first to wear their show-stopping clothes on the streets of London. Previously, extravagant and garish costumes were largely reserved for wear at court. It was a patrician pleasure rarely shared with the hoi polloi. 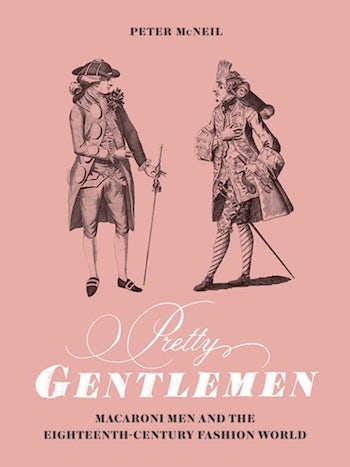 As author Peter McNeil points out, it was, in many cases, assumed that men who dressed extravagantly were, if not entirely homosexual, more fluid in their sexuality than most of their fellows. There is no more evidence that this was true to any great extent than there is that Edwardian Mashers, New Romantics, Punks, Rockers and glittering entertainers like Bowie are proclaiming their sexual proclivities by dressing differently to their fellows. As the saying goes, “Just because you dress fancy, doesn’t mean that you are a Nancy!”

And, of course, fancy dressing was not confined to the young alone in the 18th century. Courtiers and even politicians of the stature of the radical Charles James Fox dressed extravagantly when young, but his middle age dress sadly degenerated into being dishevelled.

In fact, Macaroni dress was more about shocking others than making a legitimate fashion statement to guide other men. The whole movement was about fantasy or even pantomime and, like so many things conceived to shock the old, the Macaronis had a limited time in the limelight. They grew fat; they became poor; they gambled away their fortunes; they made ill-considered marriages for fiscal reasons alone and, surely, many died of syphilis. And, of course, fun with flounces, tiny hats with a feather; silver buckles and beautiful silks and satins did not “cut it” in the country.

Muddy roads, dirty coaches, farm animals — these were all contributors to the end of the Macaroni reign. Times were becoming harder, revolutions were on the horizon and the upkeep of country estates was becoming increasingly difficult for all but the wealthiest. The world had no real place for male ruffles and buckles and as the French Revolution took its toll, men did not consider it wise to stand out from the crowd, so merging in with one’s fellows became increasingly the norm.

“Pretty Gentlemen,” with its sprightly text and very full pictorial evidence, is an instant classic in its field and an enjoyably humorous read for all tastes.

Tomes of the Times: Holiday Reading 2017

Tomes of the Times: Summer Reading 2017