The Ups and Downs of Japan Fashion Week

TOKYO, Japan — Last week, at Mercedes-Benz Fashion Week Tokyo, a group of fashion “influencers,” including myself, met up with officials from Japan's ministry of economy, trade and industry. We were presented with a didactic presentation explaining what the government is calling the “Cool Japan Initiative.” Chock full of flow charts and diagrams, the presentation basically said that the Japanese government, along with private sector companies, would invest ¥50 billion (about $50 million dollars at current exchange rates) over a twenty year period to help Japanese companies in the cultural sector expand overseas.

That Japan is “cool” didn’t need to be explained with a flow chart. Tokyo could easily lay claim to the title of the world's fifth greatest fashion capital, after the main four (New York, London, Paris and Milan), not just because of the hugely influential Japanese wave, including Rei Kawakubo and Yohji Yamamoto, but also because there are few cities on the planet in which street style is as inspiring as in Tokyo.

Then, why is it that — beyond a trickle of names like Sacai and Toga — so many post-Comme des Garçons Japanese fashion designers remain largely unknown internationally? In fact, unless you’re a seasoned visitor to Tokyo, much of what's most vibrant and stimulating about the city’s fashion scene remains inaccessible; locked away in the hives and hubs of Harajuku, Shibuya and Aoyama as well as in hipster areas like Koenji and Shimokitazawa.

As Mercedes-Benz Fashion Week Tokyo came to another close, I was left wondering why the Tokyo scene was so fractured and why — beyond the obvious language barrier — it was so difficult for international press and buyers to penetrate.

The truth is, Japan Fashion Week (the body that organises Mercedes-Benz Fashion Week Tokyo) has its own agenda — and designers must either get on-board or go their own way, resulting in a schedule that's not only late on the international buying calendar, but fractured. “The show schedule is tight and there is a gap of creativity between the official JFW shows and off-schedule shows,” says Takura Ogasawara, writer for the esteemed Senken newspaper. “Some designers who show off-schedule are more interesting than the JFW shows. But the biggest problem is that JFW shows have not become a tool of trade, as the European shows are. Buyers don’t come to see many JFW shows. And some designers think taking part in the official schedule is not cool.” From a buyer's perspective, Jesse Hudnutt of Opening Ceremony concurs. “We’re not discovering through JFW. We look at blogs and Tumblrs; we listen to our friends — word of mouth is how we find the brands we love for Opening Ceremony.”

I, too, came to rely on word of mouth to navigate Tokyo's fashion schedule, as I tried to see everything that would be relevant from an international perspective and genuinely offered a fresh perspective. Brands such as Anrealage and Mint Designs, which offered up the slickest shows of the week in terms of concept and production values, were once part of the official JFW schedule, but opted to show off-schedule this season. I literally had to bump into a fan on the street, who addressed me as “Style Bubble-san,” to discover Shibuya’s Parco, where designers Mikio Sakabe and Yoshikazu Yamagata were putting on small scale presentations.

Then, there are the numerous showrooms, where some of Tokyo’s most impressive menswear labels, such as Phenomenon and The Soloist (designed by Takahiro Miyashita, formerly of Number (N)ine), were presenting their collections, quietly and unassumingly. Even a public and participatory event like Shibuya Fashion Festival, where young and exciting fashion talent Jenny Fax held her show, was not part of the official JFW schedule. In fact, it's only once you've asked around, done your researched and visited key shops such as Candy in Shibuya that you get a more complete picture of Tokyo’s fashion scene: teeming with labels and brands that have the design chops to break out internationally.

Strong brands like Yoshio Kubo and Facetasm also put on strong shows at the Shibuya Hikarie building, the official JFW venue. But overall, the official events came up lacking.

Akiko Shinoda, in charge of international relations at JFW, acknowledged the fractious nature of Tokyo fashion, blaming lack of sustained government support as the primary deterrent for designers contemplating joining forces with JFW. “The problem in Japan is that our government positions change every year and a half,” says Shinoda. “Once we've spent the time convincing these bureaucrats that fashion is important, that person will leave and the process has to start all over again.” She rightly noted that other countries in Asia, such as Korea, Indonesia and Singapore are heavily investing in fashion and that, in Japan, despite its remarkable fashion talent and fashion legacy, the government is only beginning to realise the sector's potential.

Others such as Yoshiko Edstrom, director of sales and PR firm Edstrom Office, were more pessimistic. “The government do have the budget, but they don't understand how Japanese fashion can have an effect on the overall economy. We have top level designers from Comme des Garçons to younger labels. But Comme des Garçons was, itself, completely self-supported from the start. The Japanese government still doesn’t understand what it is that they do.”

This all begs the question of whether a company like Uniqlo could mirror what Topshop has done with the British Fashion Council in London and bring support and cohesion to Tokyo's emerging fashion scene. When questioned on this possibility, all Shinoda would say is that they would endeavor to make an approach.

One thing's for sure: there’s certainly no lack of desire on the part of international buyers to discover and bring Tokyo designers to global markets, despite the logistical challenges of navigating the scene. “We are pushing ourselves to go to places to find things that haven't been seen,” says Hudnutt. “I think there's a fascination with Japanese style from a young urban customer and, added to that, Japanese textiles and printing are somewhat unparalleled.”

But the bottom line is, like with London, even with the right building blocks in place, the road to Tokyo's rise as a global fashion capital may be a very long one. Having talent is one thing, but harnessing it and correctly presenting it to the world is another. “There simply needs to be more investment," says Hutnutt. “JFW needs to bring more buyers and press over. There's such an interest, just not enough of a spotlight.”

Ogasawara is hopeful that Tokyo can rise as London has done. “I remember many press and buyers went to London Fashion Week when Christopher Kane began to show. I hope Tokyo becomes an incubator of young talent like London.”

As it turns out, new initiatives to bring Japanese designers to international markets are already afoot. Jakarta Fashion Week is the next destination for some of JFW’s designers. How the “Cool Japan” funding will be spent over the next few years still remains to be seen, but one hopes it will be spent wisely, possibly on a showroom programme to bring Japanese designers to New York or Paris. If JFW manages to provide a real international platform, then perhaps the best Tokyo designers would be more willing to present the kind of united front that would certainly wow the world.

Here’s a rundown of some of the designers that caught my eye in Tokyo: 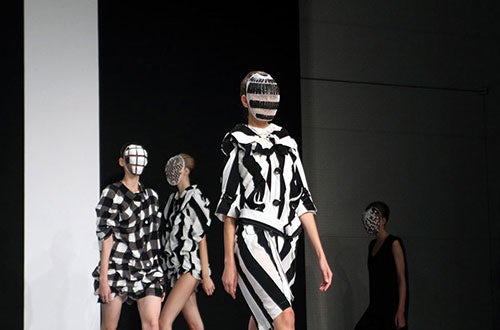 Kunihiko Morinaga lauched his own brand Anrealage in 2003 and has slowly but surely built up a reputation for the kind of mind-blowing, conceptual fashion that could well make its way to Paris. His latest Spring/Summer 2014 “Size” collection featured magically shrinking dresses controlled by mechanical wires.  They owe a debt to Hussein Chalayan, but who else out there is making this kind of moving fashion a reality? 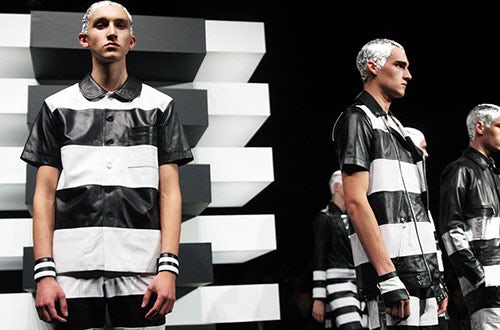 Designer Bajowoo may be Korean but has made Tokyo his base, setting up his label 99%Is here last year.  Bajowoo has already caught the eye of Dover Street Market, where he presented a collaboration with Mackintosh. His Spring/Summer 2014 collection was a tightly focused edit of monochrome and metallic leather separates that spoke to young Tokyo’s style crowd. 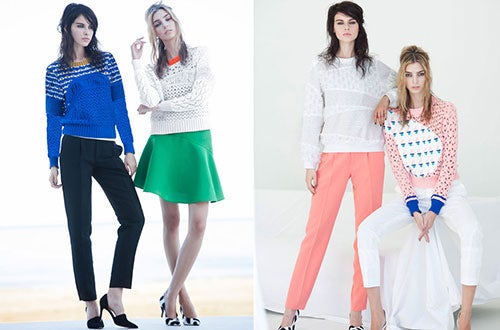 I remember Naka’s brilliant collection from his graduate show at the Royal Academy of Fine Arts in Antwerp, so it was good to see this talented knitwear designer stocked at the likes of United Arrows and Isetan. Naka has learnt to commercialise his specialist knitwear techniques, taking advantage of fine Japanese craftsmanship to good effect. 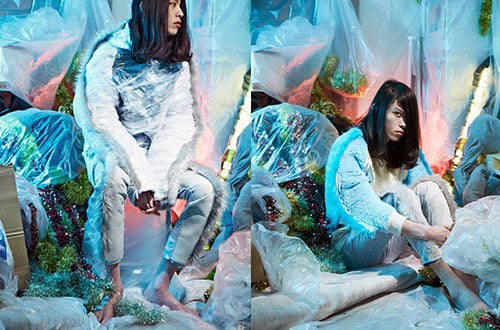 Balmung Hachi started his design career making odd pieces for small shops and he’s still working on an out-of-sync schedule, as his Spring/Summer 2014 collection won’t be ready to show until December. Still, there’s something visceral and raw about his creations that are loved by Tokyo street icons like Mademoiselle Yulia. 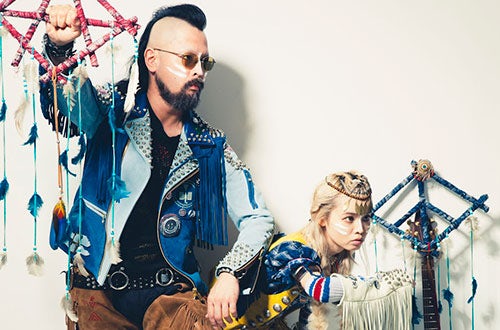 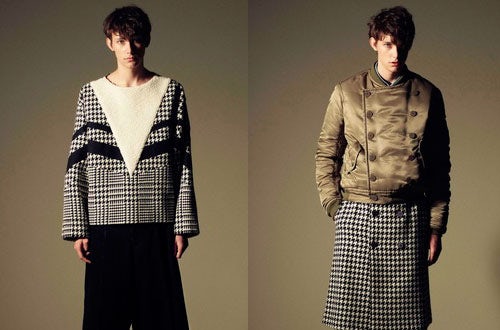 Takeshi Osumi aka Big O’s menswear label is namechecked by everyone as a personal fave. Since launching his womenswear line and eschewing shows, Osumi has been concentrating on the commerciability of Phenomenon, known for mixing unexpected elements and gender bending. With the right support in Europe, the label is definitely at a level where Paris could come calling. 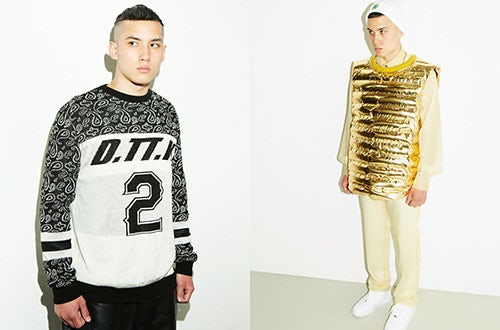 Kazuma Detto leads a collective that, since last year, has begun to express itself through clothing, influenced by what it calls a “Neo Sporty” aesthetic, populised by stores such as GR8 in La Foret and Candy in Shibuya. 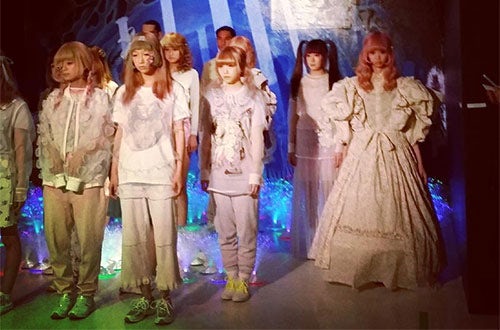 Designers Mikio Sakabe and Yoshikazu Yamagata of artsy label Writtenafterwards represent a very different side to Tokyo fashion, more fitting to our own clichéd views of Japanese conceptualism. They are eschewing commercial obligations and instead tapping into the raw seeds of creativity with their alternative fashion school Coconogacco. Their own collections and that of their students indicate the creative potential of young designers in Japan. 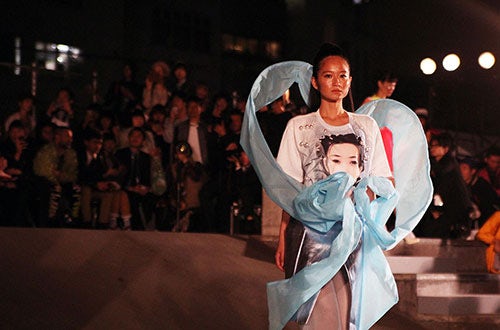 Shueh Jen-Fang, originally from Taiwan, started her label Jenny Fax in 2010 and has since been building a cult following with collections ridden with personal childhood and sub culture references. Her Spring/Summer 2014 show, held in a skate park as part of Shibuya Fashion Festival, looked to dodgy 1990s Chinese horror movies as she went to a darker place than her usual sweet and Kawaii aesthetic. 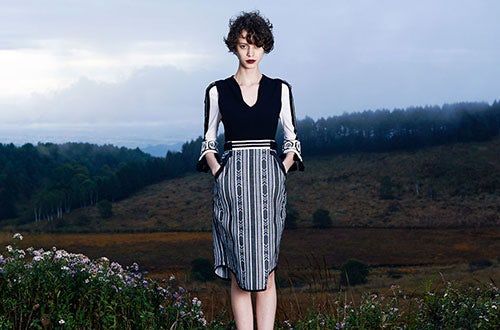 Maiko Kurogouchi named her brand after her nickname, Mame, meaning “bean.”  Her incredible cut-PVC accessories have already caught the eye of Joyce and Opening Ceremony, but she’s also making headway with her beautifully crafted clothing. This season she was inspired by the traditional gestures of her grandmother. 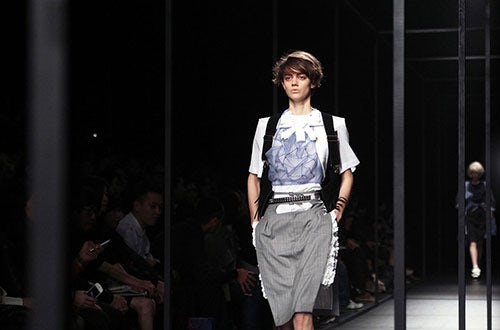 Textiles whizz Hiromichi Ochiai launched his brand in 2007 and is one of the few unisex labels which showed at Tokyo Fashion Week. Like Phenomenon, Facetasm mixes up workwear, streetwear and high fashion to create a unique mix that sees hardy aprons take to the catwalk along with decorative ruffles. 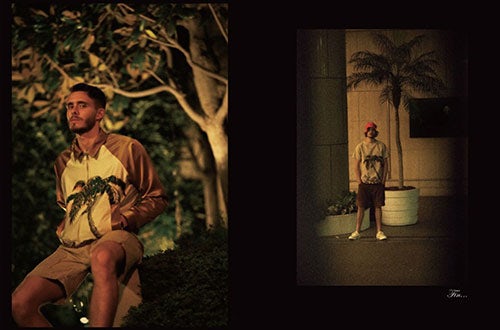 There’s a whole host of menswear brands from Tokyo that deserve mention, but SASQUATCHFabrix and its brother brand EOTOTO are definitely at a level where international stockists have taken a keen interest. The concept is “High Performance Vandalism, Always Presenting a Sense of Freshness.” What that translates into is highly-nuanced menswear that borrows from influences around the world, without ever feeling heavy-handed.