The Fashion Industry (Still) Has an Image Problem

Is idealised imagery a necessary part of communicating the dream of fashion? Or should brands project a more realistic image of women?

LONDON, United Kingdom — I hopped into a taxi the other morning and, as often happens with our famous London cabbies, the driver engaged me in a bit of friendly chit-chat. Invariably, this means talking about the bad weather, the traffic snarls, the origins of my accent — or, on occasion, my job.

"What line of work are you in?" he asked. I told him I worked in the fashion business and went back to busily checking my emails on my iPhone.

"Are you a designer?" he asked.

"Nope. When I said I work in the fashion business, I really mean the business of fashion," I responded, explaining that I had started this website and worked as a consultant and did some teaching and lecturing as well.

That's when the conversation took an unexpected turn.

"Can I ask you something?" he went on. "Why is it that you lot insist on putting clothes on models that are stick thin and 6 feet tall, when the average woman is curvy and only about 5 feet 6 inches tall?" Good question. As it turns out, he wasn't far off. According to some quick Wikipedia research, the average woman in the UK is about 5 feet 4 inches tall (in many other countries, she is even shorter).

"And, all those advertisements, with those skinny legs flying in the air. What woman wants to see those? I can understand that blokes might get off on seeing those legs, but why would women want to see them?"

"It's not much better for the guys," he added. "My son keeps going to these castings for Abercrombie & Fitch, where all those young men wander around in their underpants with their muscles all rippling. He's only five foot seven, so each time he goes, they turn him away. It's very upsetting," he said, explaining that his son is regularly cast in films and television, but can't seem to crack fashion's ideal male image.

All of a sudden, I felt like I had to defend the fashion industry and I couldn't. "I am really not quite sure why the industry insists on doing this," I said.

It wasn't the first time I had heard these kinds of complaints from someone from outside the fashion industry. My sister, a paediatric endocrinologist focused on childhood obesity, attended a fashion show with me in New York once. She absolutely loves fashion and loves shoes and bags, but she could barely look at the models because she found the whole thing so revolting. "None of these women are menstruating," she said to me frankly. "They all look so unhealthy."

Recalling this conversation with my sister and reflecting on my chat with the cabbie, I left the taxi feeling pensive. As beautiful as fashion imagery can be, the so-called 'dream' that the industry projects can lead to unhealthy behaviour. According to the National Eating Disorders Association, twenty years ago, the average model weighed 8 percent less than the average woman. Today’s models weigh 23 percent less.

Would the industry ever be able to change and step outside these ideals? I wasn't sure.

Then, over the weekend something popped up in my Facebook feed that gave me a little hope. A friend from university, Nishi Aubin, a full-figured woman with a personality to match, posted something that caught my eye.

"Way to go H&M!" she wrote, along with a photo of two size 6 and size 10 mannequins, dressed in sexy lingerie. Apparently, H&M had introduced normal-sized (not 'plus-sized', as we might like to call them) mannequins in some of its stores in Sweden. 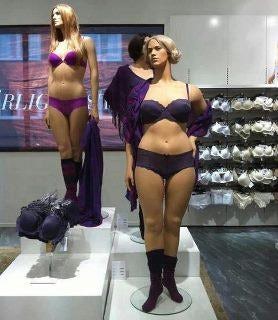 According to the Huffington Post, the photo went viral after a website called Women's Rights News posted the photo to their Facebook page, with the comment "Store mannequins in Sweden. They look like real women. The US should invest in some of these."

As it turns out, the image was not taken at H&M, but rather at another Swedish clothing chain called Åhléns. Regardless, the post received more than 60,000 likes, 18,000 shares and 3,000 comments, from people saying it was about time fashion reflected humanity as it really is. This overwhelming reaction seems to support the conclusions of a Cambridge University study that found women prefer brands whose advertising reflects their own identities.

Maybe there is hope for us yet.

What do you think? Is idealised fashion imagery a necessary part of communicating with (and enchanting) consumers? Or should more brands be taking Åhléns' approach and communicating a more realistic body image?