LONDON, United Kingdom — In 1997, Rosita Missoni tried to retire from the company she and her husband, Ottavio (known as Tai), had started together in Gallarate, Lombardy, in 1953. “I was tired,” she says, “For me the passion that you must have to work in fashion had become a duty.” She attempted to play the doting grandmother, taking her grandchildren to school three days a week, but it didn’t last. “I decided that my life could not go on in that way. I had a terrible sense of uselessness. For me, to be involved with work was essential.”

Growing up in Lombardy in the 1930s and 1940s, Rosita had no formal fashion education. She didn’t need one — her family had a small business making robes, kimonos, shawls and beachwear. “The atelier was my fashion school. I was always involved with fabrics and patterns. My parents’ pattern-cutter made a stipulation that my mother would provide all the world’s top magazines for her, so I had a constantly up-to-date fashion education.”

“My parents did everything their own way,” says Angela Missoni, Rosita and Tai’s daughter and, since 1997, creative director of the brand, which reported annual revenues of €170 million for 2013, with wholesale accounting for approximately 80 percent of sales. “When they were young, they didn’t live in a house that already existed, like so many of their friends did. They built their own. It was the same with the factory. Towards the end of the ’60s, they decided to build their own.”

“It was the second factory,” Rosita interjects, referring to the Sumirago building built in 1968. “Tai said, ‘Why don’t we build a factory in a place where we would like to spend our weekends?’ The landlord wanted to sell the land to build condominiums and we just decided to be brave. We learned that the bank would give us the money to build our own factory on the understanding that we would give work to women in the area.” The factory, which is outside the city of Varese has the same view of Monte Rosa, that Rosita had as a little girl. 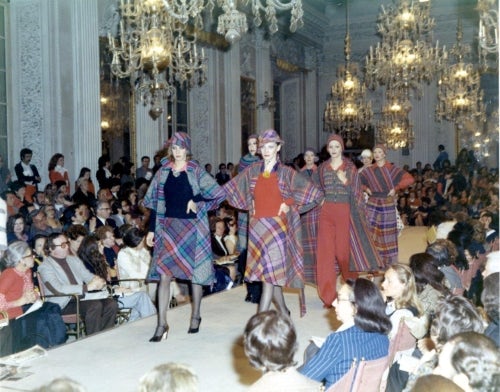 A Missoni presentation in 1972 | Source: Courtesy

“At that time,” Angela tells me, “fashion — and especially knitwear — was all about Florence, not Milan. But our factory and my parents’ home were nearer Milan, so they decided to show in Milan, just at the time when Milan was beginning to become the fashion centre of Italy.”

The first Milan show was held in 1966 in Teatro Gerolamo, a puppet theatre, while the first Missoni zig-zags appeared in the brand’s Autumn/Winter 1967 collection. Despite years of criticism from the Florentine press, the all-important American press eventually gave them the thumbs up, when Bernadine Morris of The New York Times pointed out that Missoni had provided a valid reason for journalists to stop-over in Milan which, up to that point, had not been a destination for buyers and press in the same league as Florence or Rome (which was then, as now, dedicated to couture).

Tai, one of the most laid-back Italians I ever met, once said that, when the Missonis started, Italian quality did not have the strong reputation it has since achieved. In order to sell, the fine cloths woven in Biella, were labeled ‘Made in England.’

“My husband, who was an artist at heart, put together the different yarns and colours to create a completely unique look,” Rosita says. “One that was instantly recognisable and covetable. We loved doing everything together without bringing in a textile designer —finding new yarns and mixing them. We loved taking three colours of yarn and mixing them to make a fourth one. He understood that creating pattern is like composing music. I remember our good friend Diana Vreeland’s comment: ‘Who said the rainbow has only seven colours? There are shades.’”

Vreeland’s enthusiasm for the Missoni product led the family, in 1969, to Stanley Marcus, chairman of Neiman Marcus. “That really was the beginning for us in the American market, although French Elle was the first magazine to support us,” says Rosita.

Rosita recalls that in the 1970s Missoni presented four collections a year, with the emphasis very much on the US markets. Marvin Traub, chief executive and president of Bloomingdale’s (the man who gave Ralph Lauren his start) was so impressed with what they were doing, he introduced them to Fieldcress, a highly influential producer of ‘bed and bath’ — sheets and towels — for whom the brand went on to produce four collections each year for three years. Then a black and white collection, praised by the press, didn’t sell well. So Rosita, by now very keen on household goods, went into the archives of the family factory and found some yarns from her grandmother’s time when they were used as fringes on large embroidered shawls “of the sort that were fashionable to cover lampshades.”

Angela was born in 1958. The youngest of three children, she had two older brothers Vittorio and Luca, who both were sent away to boarding school. (Both also joined the family business — Luca, who used to design menswear, is artistic director of the Missoni archive, while Vittorio was the company’s marketing director until his death in 2013.) As a teenager, Angela witnessed the family brand make waves in the US and beyond. “Looking back, I realise that I was an observer, a listener, a little introverted. I was alone all week, but I was not bored. We had so many interesting people coming to the house: friends of my father’s; artists, thinkers, journalists; TV anchor men — all very strong personalities. My parents took me with them wherever they travelled. My teachers were not happy but I felt so lucky being part of my family’s exotic life. Much more enjoyable than school!” 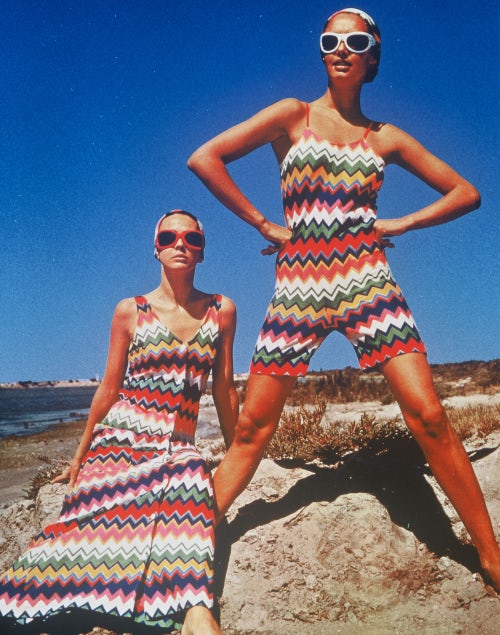 Missoni in cover of Grazia in 1968 | Source: Courtesy

According to Angela, still a teenager in the early days of the Missoni business, things moved quickly for the family. “I have a marvellous memory for the fashion world — almost total recall. I remember how the shows were held in a room in the factory. It was a bit of a crush. About 100 people. From all the best stores and all the best press.”

Before deciding to follow in her parents’ footsteps, Angela toyed with other ideas. “I was not at all thinking about fashion or working with my parents. Absolutely not. And I was neither academic nor a good student. For me, school was never as interesting as what was going on outside. I am very much interested in people and how their brains function. For a time I studied psychology but I didn’t get a degree because I did not finish the course.”

Angela was clearly always very independent. At the age of 19, she moved out (a very rare thing for a girl in Italy at that time). Her brother Vittorio and his wife Maurizia had decided to move out of their home near the family house, so Angela moved in. When she told her mother, “She looked at me, shocked. She said: ‘Does that mean you won’t be coming home for dinner?’ I have to say that I have surprised my mum every moment of my life. We are very alike — she has three kids and I have three kids [Margherita who designs accessories for Missoni, Francesco, a partner at a consulting firm in Milan and Teresa, a ambassador for the brand] — but also very different.” Indeed, when Angela told her mother she might marry her first partner, Rosita was apparently suprised that such a modern young woman would do such a traditional thing.

Although the two women live in their own houses near Varese, Rosita normally goes to Angela’s, a 10-minute drive by car, for Sunday lunch. Both women use their Rosita’s grandmother’s recipes.

It was in the late 1990s, once Angela had four collections under her name as creative director that Rosita tried to exit. “I said to myself: ‘I know that Angela can handle the business.’ I had to find my own way.” So she turned her attention to Missoni Home, which had been producing furnishing fabrics since the 1980s. “My home has been a passion all my life. But so has my work. I could see a way of bringing them both together.” And she continued to work on fabrics with her husband.

“Although we fought a lot, we both found the immediacy of knitwear both fascinating and stimulating. You had the idea; two days later you had the fabric. Our roles were well–defined, although they crossed over quite a bit, as happens in close partnerships. Tai worked on pattern. I worked on shape. His approach was more cerebral than mine. I was more instinctive. Tai hated going to the flea markets. I loved them. I used to come back with pieces of old fabric, ancient books and even cahiers of Sonia Delauney — for virtually nothing. They were a great inspiration to Tai.”

In 2013, the family suffered a tragic double loss. In January, Vittorio and Maurizia were killed in a plane crash off the coast of Venezuela — their bodies not found until October of that year. Then, in May, at the age of 92, Tai died in his sleep. It was Angela who “handled everything,” while her mother was too grief-stricken to face the world at such a harrowing moment.

“I am lucky enough to have a lot of both parents in my mix,” Angela continues. “My father was a pragmatist and an artist. For him I get my sense of freedom. From my mother I get my sense of being a natural home and family builder. Whereas my father used to say, ‘What’s the point?” I wake up in the morning ready for the problems. Anyone in the factory can come to me with a problem and, whether it is technical or creative I will find a solution. I am very curious and I really believe there is no creativity without curiosity.’ Under Angela, the Missoni name has a bright future.