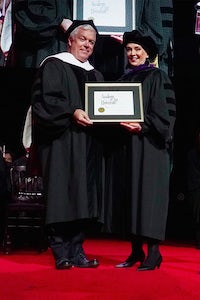 LONDON, United Kingdom — On Thursday, our editor-at-large Tim Blanks and I had just emerged from a backstage interview with Gucci creative director Alessandro Michele at Westminster Abbey for our 'Tim's Take' video series when I had one of those surreal moments that happen every so often here at BoF.

I looked on as Tim and Fabio Donghi, his long-time trusted cameraman, worked their magic, unravelling Michele's story of kings and queens and fantasy motifs, always in awe of how he manages to quickly synthesise a collection’s meaning in a way that is insightful, intelligent and entertaining at the same time.

I am not ashamed to say that Tim's Take has been heavily inspired by Tim's previous work for the Canadian Broadcasting Corporation's weekly television show Fashion File, which first taught me about fashion in the 1990s, watching him pick apart the creative processes of fashion's most talented designers and place them into a wider cultural context.

Last week, Tim was awarded an Honorary Doctorate of Humane Letters from the Academy of Art University in California, recognising his extraordinary contribution to our industry. Above all else, Tim's success is grounded in the deep relationships he has built and maintained over the course of his career.

"Tim has a unique voice and a unique vision," says Dries Van Noten, in a video shown at the doctorate presentation in San Francisco last week. Speaking of Tim's days at Fashion File, he adds: "Fashion was really a tribe of very enthusiastic and passionate people. Now, fashion became more like an industry and a business. We really need people like Tim to translate all the fun and all the energy that we feel into words and into images."

"When I am having a conversation backstage with Tim, the part that I enjoy the most is that he approaches it with such relish, like he's really enjoying himself, which makes me enjoy myself," adds Rick Owens.

Indeed, as Tim and I wound our way through the Abbey's thirteenth-century cloisters just before the Gucci Cruise show, Tim was laughing and cracking jokes in his signature deadpan. After more than forty years in the business, he still enjoys every interaction with fashion's fascinating characters and his boundless curiosity is undiminished.

We really need people like Tim to translate all the fun and energy that we feel into words and images.

"There's so many times when journalists approach you and they put you on the defensive. But with Tim, he's there with you, he's there encouraging whatever it is you're trying to say," notes Anna Sui, his long-time friend.

Over the past year, I have seen this happen over and over again in Tim's backstage interviews. Somehow, Tim knows what a designer is thinking and feeling and what has driven them to create — often, in a way that they don't know themselves until Tim starts asking his questions. When they respond, the look of mutual understanding and shared love for fashion is the sign of this deeper connection.

"I think Tim is so successful in connecting with people the way he does because he really comes out a place of true intellectual curiosity," says Deborah Needleman, editor-in-chief of T Magazine. "He's able to translate his incredible knowledge and sense of fashion history to a wide audience. He can speak and write to the most knowledgeable fashion insider and to the general public, at the same time."

All of us at BoF are so proud to have Tim on our team and that he has been recognised in this way. Congratulations to the right honourable Dr Tim Blanks!