The top campaigns of the Autumn/Winter 2015 season featured under-the-radar models, rather than high-wattage celebrities and supermodels.

The top campaigns of the Autumn/Winter 2015 season featured under-the-radar models, rather than high-wattage celebrities and supermodels.

LONDON, United Kingdom — Fashion has hit refresh and cast a number of new faces in many of its most impactful advertising campaigns for Autumn/Winter 2015. This time last year, Edie Campbell appeared in three of BoF’s top five campaigns. This season, it was a proliferation of under-the-radar models that fronted some of best campaigns. In contrast, the traditional practice of casting high-wattage celebrities and supermodels read as a tired formula that failed to break through the clutter.

What’s more, for those fashion houses that cast lesser-known models, it was their brands — not the faces that represent them — that truly took centre stage. This is especially significant as the industry finds itself in a period of significant flux. In recent months, we have seen the first moves in the wholesale reinvention of Gucci, while the once mighty commercial powerhouse Prada has experienced a dip in sales and profitability. At LVMH, Marc Jacobs and Louis Vuitton both continue to revamp their creative strategies to reenergise their brands and product offerings. The best of this season’s campaigns offered thoughtful and thought-provoking lenses through which to see these brands in evolution.

Please enjoy our Top 10 Campaigns of the Season and let us know what you think in the comments below. Which campaigns did you like most? 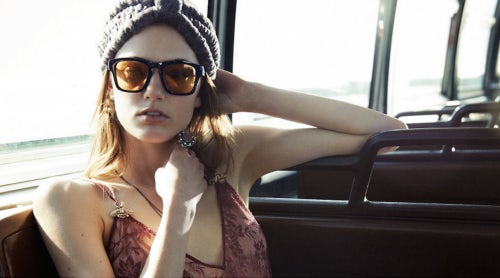 Alessandro Michele has returned Gucci to the tip of the industry’s tongue in just two short seasons. As the Gucci show regained its unmissable status — for advertisers and non-advertisers alike — expectations for how Michele would encapsulate his direction for the brand in print advertising rose. Although Michele art directed the brand’s Cruise 2015 campaign, Gucci’s Autumn/Winter 2015 campaign was the first that included his own designs. For the shoot, Michele chose to contrast the idiosyncratic spirit of the new Gucci woman, her eccentricity and romanticism, with the gritty realities of city life. Photographer Glen Luchford shot the campaign on the streets, subway platforms and buses of Los Angeles. The nostalgic, sun-soaked 1970s hues of the images are enlivened by the youthful vibrancy of the almost unidentifiable models. It is difficult to a imagine a more distinctive departure from the studio shot, still life supermodels of Frida Giannini’s tenure. 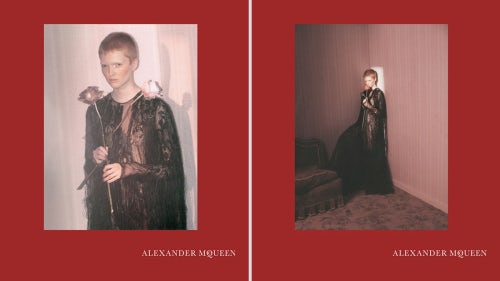 Subversion has been part of Alexander McQueen brand since its founder first started designing clothes. Under the creative directorship of Sarah Burton, its subversive elements have shifted, becoming more feminine, but they remain just as powerful — if in a quieter way. This season’s campaign, shot by British photographer David Sims, is at once both hauntingly melancholic and softly romantic. New face Ruth Bell’s roughly shorn hair — of the type historically inflicted on disgraced women paying penance for their crimes of passion — is contrasted by blushing roses in full bloom, and framed in passionate blood red. Bell’s makeup has a distinct 1970s slant that is echoed in the sparse set design. Contradiction, subversion, allegory and historical reference points — a McQueen tour de force. 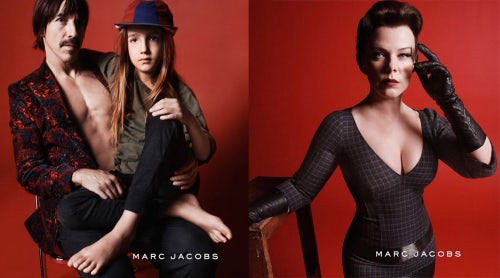 Marc Jacobs called on his friends to star in his Autumn/Winter 2015 campaign — a lot them. Set against a red backdrop, David Sims captured rarely seen facets of the character of each of his subjects, who ranged from iconic singer Cher to nine year-old Betty Lowe, sister of British model Daisy. Dripped out over Instagram, the campaign also included some very famous faces with prior associations to the brand, such as Winona Ryder and Sofia Coppola. The polyglot casting and sheer breadth of campaign stars are perhaps indicative of how all encompassing Jacobs believes his brand to be. 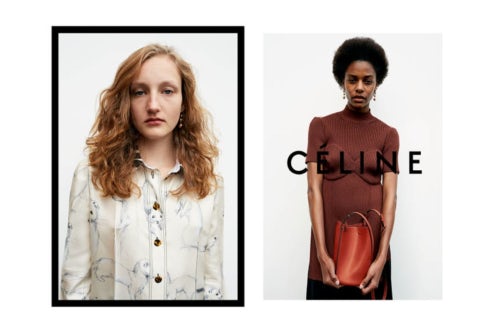 With natural hair and little or no makeup, Juergen Teller’s tightly shot portraits of the unknown models cast for this season’s Céline campaign speak to the unfussy, confident woman that the brand’s creative director Phoebe Philo continues to champion. Teller’s intimate shooting style, the thick white borders with which he frames his photography and Camilla Nickerson’s utterly believable styling of Philo’s strong take on femininity were all present. However there was one notable absentee from the traditional Céline campaign team —  long time muse and Philo doppelganger Daria Werbowy. Her absence may have surprised many, but the casting of new faces in one of fashion’s most prestigious campaigns added a sense of newness to a now very well established visual aesthetic. 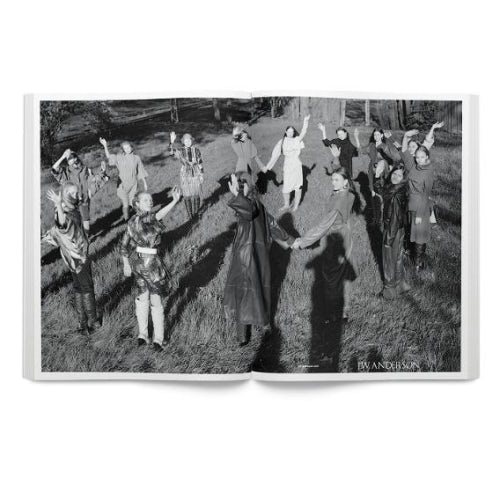 Given how luridly colourful J.W. Anderson’s 1980s West Berlin inspired Autumn/Winter 2015 collection was, it came as a quite a surprise that the designer chose to release a campaign shot in black white. Anderson and his creative team, consisting of photographer Jamie Hawkesworth and stylist Benjamin Bruno, travelled to Estonia to cast and shoot the entire campaign on location. The striking images that were produced both have pagan undertones. A group shot of celebrants holding hands in a circle could be a still from the 1970’s classic The Wicker Man, while the second image, a depiction of a model whose long hair completely covers his face, is cultish — almost voodoo-like. 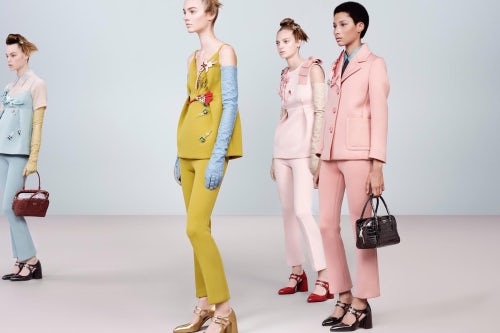 Miuccia Prada and Steven Meisel seem determined to maintain one of the longest standing creative partnerships in fashion — certainly one of the longest standing in the fickle field of fashion advertising. This season, the Brutalism of last year’s stark, concrete-filled images was replaced by seemingly random compositions of models in pretty pastel hues. Of particular note was arresting new face Lineisy Montero, following in the footsteps of Malaika Firth (who in 2013 was the brand’s first black face since Naomi Campbell in the 1990s) by introducing more diversity to the Prada casting. 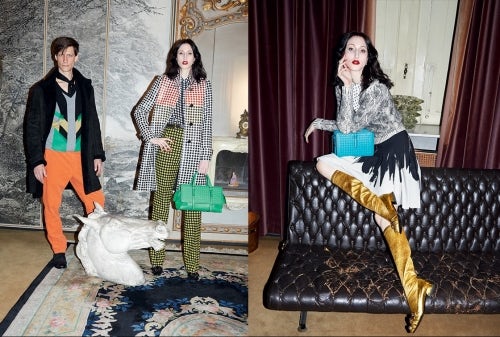 This season, Bottega Venetta tapped Anna Cleveland and Freddy Drabble to star in its fashion campaign. Cleveland, who is the daughter of Salvador Dali muse and modelling legend Pat Cleveland, has been heralded as the next big runway fixture since her appearance closing the Giles runway in Autumn/Winter 2014. Of all the new faces featured this season, she is likely to be one of the few with real longevity in her career. Katie Grand, who styles Giles Deacons’ shows, also styled the campaign, which was shot by Juergen Teller in the 18th century Turin home of Italian designer Carlo Mollino. Bottega’s creative director Tomas Maier told press, “[Teller] managed to enhance the upbeat and graphic nature of the collection, interpreting the overall mood to powerful effect with his signature playfulness and lighting.” The campaign is also the final entry of the book, “Art of Collaboration,” a project begun by Bottega in 2012, which has charted the brand’s collaborations with a number of prominent photographers for its campaigns. 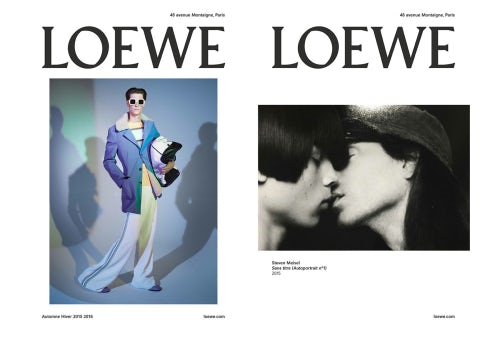 J.W. Anderson continues to breathe fresh air into Spanish luxury brand Loewe. For the Autumn/Winter 2015 campaign, he chose once again to mine Steven Meisel’s past photographic work — as he did in his first campaign for the house. This season, Anderson selected a series of unseen black and white self-portraits of the photographer — drawn from Meisel’s private archive. One image shows Meisel as a child with four parrots, another the designer passionately kissing another man. As a contrast to the candid self-portraits, Meisel shot model Marc André Turgeon wearing sunglasses and exaggerated flares in front of an ice-cream hued background. By viewing the Loewe brand through images that evoke a sense of personal experience, Anderson’s idiosyncratic taste becomes both more accessible and relatable. 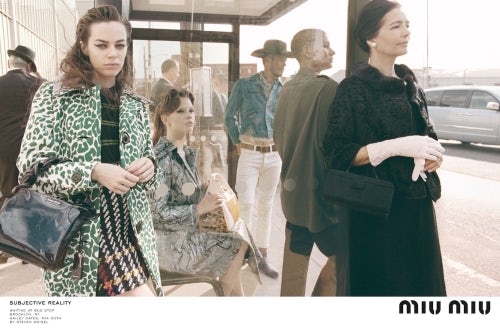 Miuccia Prada also found inspiration in the streets this season, calling on regular collaborator Steven Meisel to shoot Stacy Martin and Mia Goth, the breakout stars of Lars von Triers’ Nymphomaniac. The campaign, entitled “Subjective Reality”, reflects Meisel at his most cinematic. The taught imagery, shot in Brooklyn and East Village, captures imagined street life in a grainy documentarian style, reminiscent of film rolls from the 1950s. The model’s updated ‘victory roll’ hairstyles and Mary Quant like alligator mini-dresses continue the period feel — not to mention the John Lennon look-a-like that walks across shot in one image. 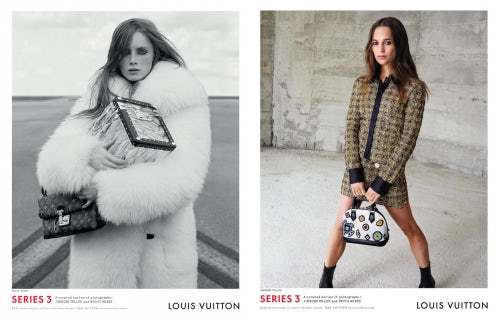 Nicolas Ghesquière called upon the photographic talents of Juergen Teller and Bruce Weber once again this season. (Interestingly, Annie Leobovitz does not appear to have contributed to Louis Vuitton’s “Series Three” campaign, as she did to “Series One” and “Series Two.”) Although the campaign featured recurrent Ghesquière muses such as Jennifer Connelly and Liya Kebede, this season new faces stole focus from the regulars. Indeed, it was the shots of “Deus Ex Machina” actress Alicia Vikander, pink-haired emerging Australian model Fernanda Ly, and a 19 year-old Dutch model Rianne van Rompaey — who closed Ghesquière’s first Vuitton show — that had everybody talking.

This article was revised on 29 July, 2015. An earlier version of this article misstated that the model featured in the Alexander McQueen campaign shown above was Jamilla Hoogenboom. It is in fact Ruth Bell.