LONDON, United Kingdom — In what has become a seasonal rite, the Autumn/Winter campaigns — those all-important advertisements that fashion brands use to communicate their aesthetic codes and introduce their latest offerings — will soon fill the September issues of major fashion magazines. Importantly, they will also have a powerful second life online: on Internet forums and social platforms like Pinterest, Facebook, Twitter and Tumblr, where they are shared, Liked, tweeted and reblogged, ultimately reaching a digital audience that's larger than that of even the biggest print titles. Indeed, a single Facebook announcement from Christian Dior, featuring their latest campaign ("Secret Garden 2"), received over 100,000 "Likes."

Now, without further ado, BoF presents its favourite fashion campaigns of the season, sure to light up the pages of glossy magazines and digital screens alike. Which campaigns did you like most? Let us know in the comments below. 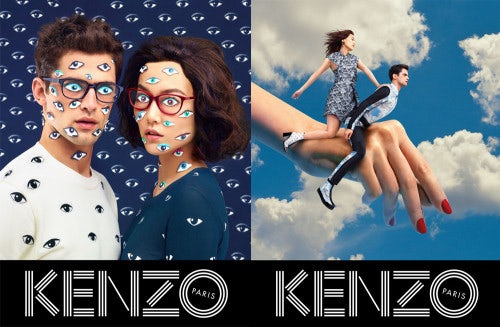 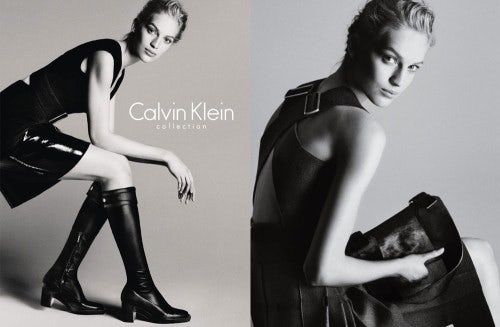 After a blowout film campaign for Spring, which starred Alex Skarsgard and was produced by famed art director Fabien Baron, Calvin Klein returned to a simpler but no less powerful concept for Autumn/Winter. Relative newcomer Vanessa Axente embodies the spirit of the brand’s classic campaigns from the 1980s and 1990s, starring supermodels Linda Evangelista and Christy Turlington. Lensed by Mert Alas and Marcus Piggott, the images convey nostalgia and a strong sense of the brand’s aesthetic codes: clean, minimal, sharp. 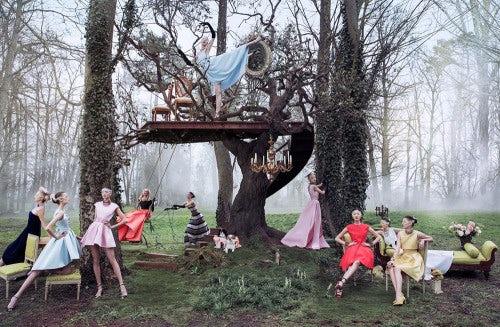 In a continuation of last fall’s ‘Secret Garden - Versailles,’ Inez van Lamsweerde and Vinoodh Matadin have created another sweeping and cinematic Dior campaign, the video for which has already attracted over 10 million views on YouTube since its June 6th debut. The campaign again stars Daria Strokous on the grounds of the famed royal palace of Versailles. A nymph-like cast joins her, blindfolded with tulle and donning floaty, ethereal gowns in petal pinks and roses. One shot is inspired by Édouard Manet's famous Le déjeuner sur l’herbe, which depicts a nude woman picnicking with two fully dressed gentlemen. 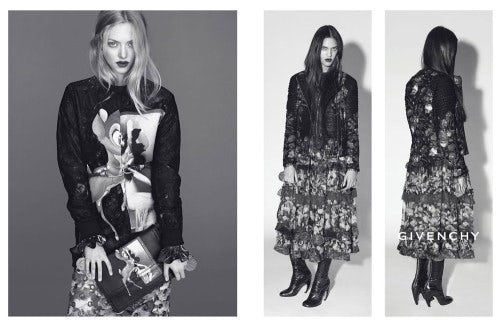 Creative director Riccardo Tisci kept Givenchy's Autumn/Winter campaign in the family. His longtime creative collaborator, former French Vogue editor Carine Roitfeld, poses with her daughter Julia Restoin-Roitfeld in the French label's floral-goth prints and biker jackets. Shot by Mert Alas and Marcus Piggott, the mother-daughter duo encapsulate the heavy-lidded sensuality that the house has come to symbolise — little wonder, as Roitfeld has styled the past few seasons of Givenchy campaigns. 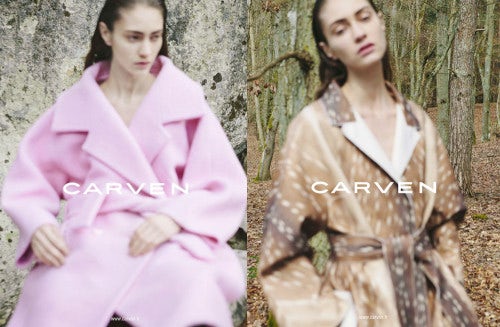 Shot in the picturesque French countryside of Fontainebleu just south of Paris, Carven’s Autumn/Winter campaign is an eye-squintingly intriguing affair starring French up-and-comer Marine Deleeuw. Swathed in oversized pastel coats and satin dresses, out-of-focus Deleeuw poses languidly against a serene woodlands backdrop. For the fourth season in a row, the French label’s campaign was shot by Dutch photographer Viviane Sassen, known for straddling the worlds of fashion and fine art with her surreal depictions and strange landscapes. 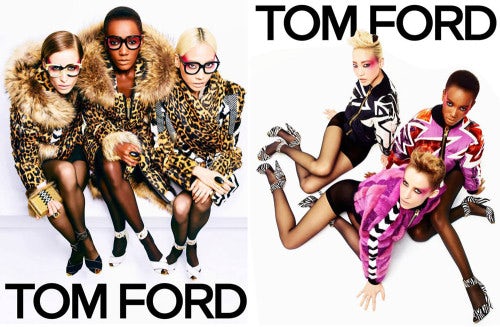 Pop art influences dominated Tom Ford's latest advertising campaign. Models Soo Joo Park, Gemma Refoufi, Herieth Paul, and Zuzanna Bijoch — fresh-faced save for a swipe of rosy eyeshadow across their temples — formed a triptych of star-embellished gowns and richly patchworked skirts with matching thigh-high boots. Shot by the designer himself, the campaign continued with the monochromatic background and high glamour of seasons past but added dynamism and movement. 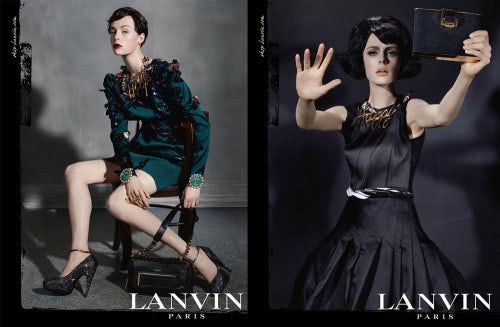 An unnerving creepiness underscored British model Edie Campbell’s transformations into six different women for Lanvin’s newest campaign, photographed by Steven Meisel, showcasing the French fashion house’s feminine, youthful dresses. They were accented by fur coats, discrete brogues, and blinged-out accessories laced with cheeky proclamations like “cool,” “love,”  even the darker “help.” Her narrative is equal parts whimsical (a goose served as a handheld companion for one persona) and disturbing, with a portrayal of Hitchcockian heroine Tippi Hedren, who starred in horror film The Birds, down to the multiple silhouettes she projects onto the wall behind her. 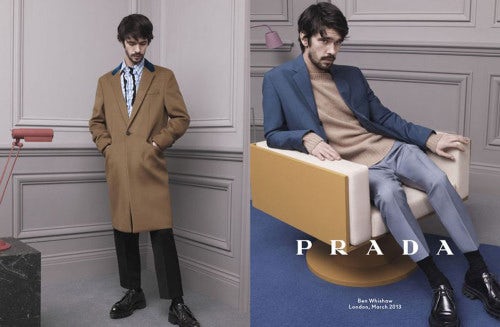 Continuing the practice of casting famous leading men of the silver screen, Prada tapped Christopher Waltz, Ezra Miller and Ben Whishaw to star in its latest menswear campaign, shot by David Sims. Set on a stage identical to the one created by OMA Studios for Knoll for the brand’s runway show in June, the geometric furniture and muted colour palette of mustard and burnt sienna evoked the mod 1960s, an era that served as inspiration for this collection. Ezra Miller stares off into the distance as he leans innocently against a wall and fiddles with a fake video camera, perhaps as a nod to the “banality” that Mrs. Prada described in the collection backstage post-show. 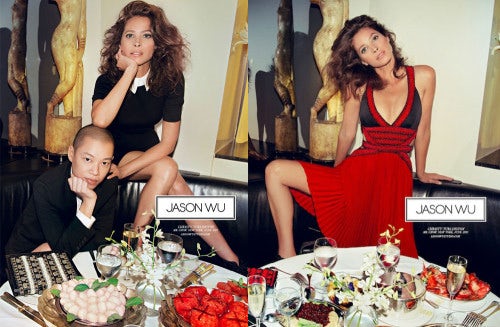 Last season saw the unveiling of Jason Wu's first major advertising campaign for his main womenswear line, fronted by 1990s model Stephanie Seymour in upscale New York eatery La Grenouille. Wu's sophomore campaign followed the template of his first, but upped the stakes with another acclaimed 1990s supermodel, Christy Turlington. Lensed by Inez van Lamsweerde and Vinoodh Matadin, Turlington appears in the middle of a decadent meal — this time at Mr. Chow — in which she has lost interest, preferring instead to lounge leisurely atop a booth. 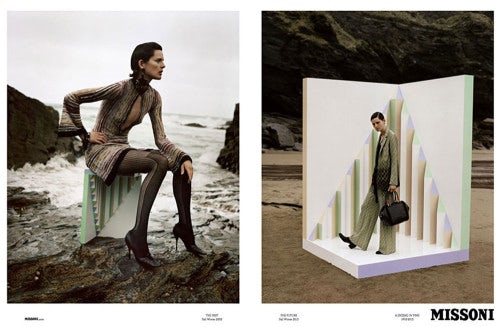 This season, Italian knitwear label Missoni celebrated their sixtieth anniversary and paid homage to their signature zigzag pattern with a campaign fronted by model Stella Tennant and photographed by Alasdair McLellan. Standing within a life-sized cube, bare save for geometric sculptures that line the inside to form a triangle, Tennant is subdued and almost wistful, despite the makeshift stage’s futurist feeling. In another shot, she sits atop a miniature version of the box, now inverted to serve as a stool, against the dramatic landscape of the rocky coast off Britain's Cornwall.