With hundreds of glossy spring/summer advertising campaigns set to populate major fashion magazines, Internet forums and social media platforms from Facebook to Tumblr to Pinterest, The Business of Fashion picks the Top 10 Campaigns of the Season. Which campaigns did you like most?

LONDON, United Kingdom — This season, as we reviewed the fashion campaigns that appeared across major print magazines, Internet forums and social media platforms like Facebook, Tumblr and Pinterest, one thing was clear: change is afoot. To usher in the new spring/summer season, often associated with renewal, reinvention, and a bit of "spring cleaning," many brands shed — or evolved — their message.

Valentino took its perennially melancholic maiden, traded her delicacy for strength, and set her against a rocky desert landscape. At Céline, creative director Phoebe Philo retained Daria Werbowy and Juergen Teller, but added Julia Nobis into the mix and enlivened what had become fairly predictable seasonal campaigns with bold Brassaï brushstrokes, realised in vibrant hues. Meanwhile, just two seasons in, Stefano Pilati has already defined his vision for the Agnona lady with a beautifully soft depiction of returning model Dree Hemingway.

Now, without further ado, BoF presents its favourite fashion campaigns of the season. Which campaigns did you like most? Let us know in the comments below. 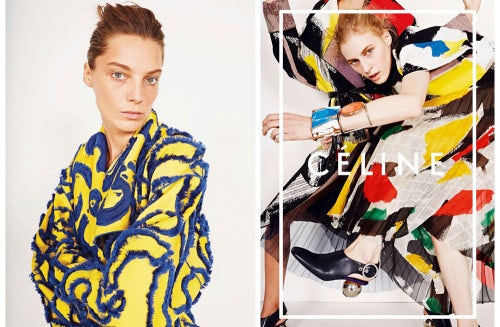 Although Phoebe Philo surprised many with her spring/summer 2014 collection, marked by vibrant colours and heavy brushstrokes, it now feels as authentically Céline as the minimalist cuts she reworked for years. The brand’s latest and boldest campaign to date captured Céline's forward momentum with Philo favourite Daria Werbowy joined by the dynamic and confident Julia Nobis, both draped in a kaleidoscopic palette. The transformation is testament to Philo’s skill as a fashion chameleon; in one fell swoop, she shifted the Céline aesthetic dramatically without alienating her loyal followers. 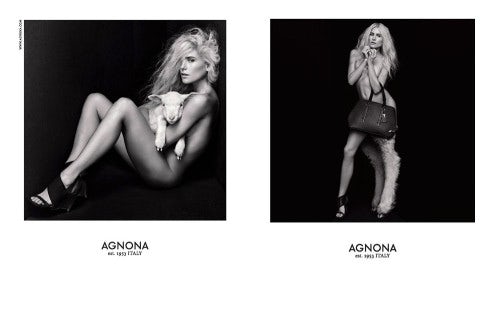 Just two seasons in, ex-Yves Saint Laurent creative director Stefano Pilati has brought his seemingly complete vision for womenswear to the 60-year-old Agnona. Indeed, the spirit of the Agnona brand, as manifested this season by the elegant Dree Hemingway, seems to have been conceived by Pilati long before its realisation on the runway. Hemingway’s turn as the sensual yet elegant Agnona lamb, rendered in black and white, is proof that a brand need not always put the products on show to sell itself. 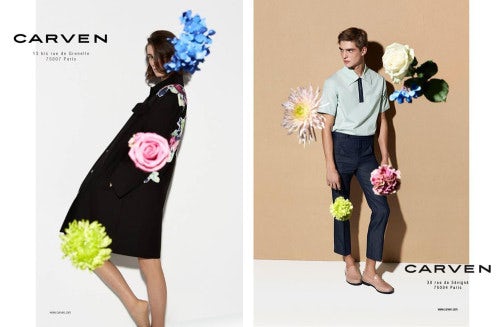 Guillaume Henry took over the sleepy French brand Carven in 2009 as a relative unknown after stints at Givenchy and Paula Ka, rapidly transforming the 80-year-old label into a commercial hit in the contemporary market. With Carven now on the expansion path in Asia, Henry’s modern and liberated vision for the brand has also resulted in a spring/summer campaign that is rendered beautifully by Dutch artist and photographer Viviane Sassen, with whom Carven partnered for the fifth season in a row. This time around, Sassen translated her arresting out-of-focus technique to floating floral elements, lending the campaign a trademark surrealist touch. 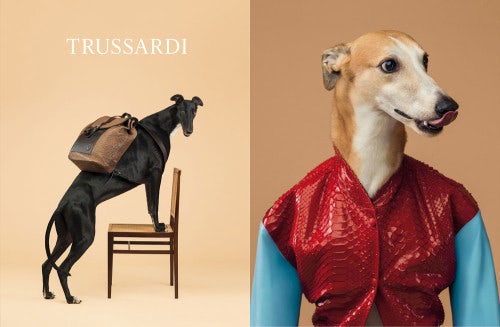 Unlike the Trussardi campaigns of seasons past, spring/summer 2014’s dapper greyhounds stole the limelight, prompting a flurry of online attention. To celebrate the 40th anniversary of its greyhound logo, Trussardi recruited the widely respected American portraitist William Wegman, who has been photographing his own Weimaraners in anthropomorphic poses and costumes for more than 50 years. The frankly adorable cast, simple props, and primary-coloured backdrops give Gaia Trussardi’s latest collection a clean, retro-inspired feel. 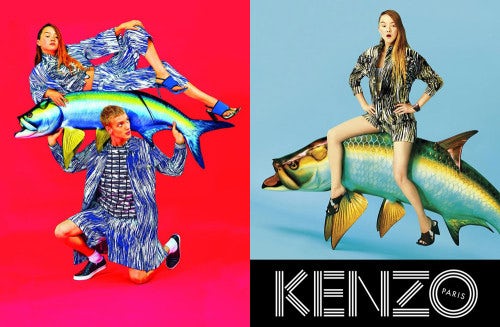 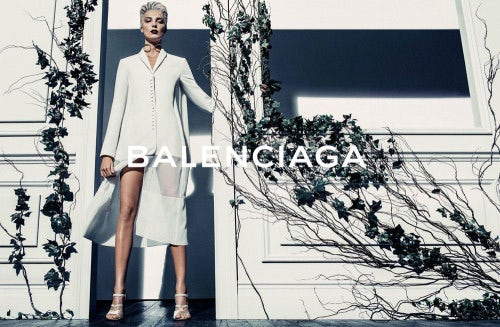 For Alexander Wang’s second campaign as the creative director of Balenciaga, he enlisted the in-demand Daria Werbowy, also the face of Céline and Mango this season. With a severely slicked-back crop of silvery blond hair and a moody, heavy-lidded gaze, Werbowy, as the incarnation of Balenciaga by Alexander Wang, is not a woman to be trifled with — not even by a tangle of climbing black vines. Wang has pushed his vision for the French label a step further this season, adding strength onto the spare darkness that Kristin McMenamy embodied last season. 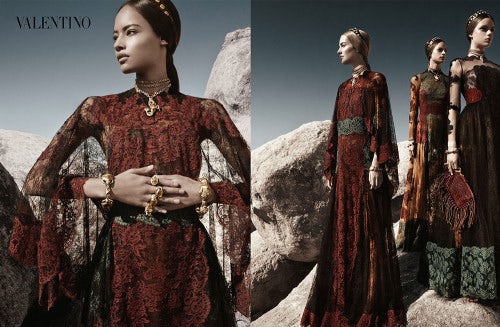 This season marked a departure from the past for Valentino. Its leading ladies, having left the safety of ornate indoor settings, are seen exposed to the elements of a stark desert backdrop. As a result, they appear emboldened, emanating a kind of quiet strength that has replaced the fragility of previous campaigns, but with no less drama or romance. 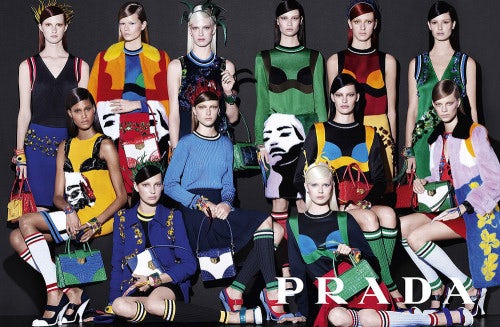 Mrs. Prada and her intriguing coterie brought the artistic inspirations of the brand's spring/summer collection to life in a dazzlingly colourful and energetic ensemble. Posed as though sitting for a painter’s portrait or a class photo, the cast is arranged strategically, making the faces on the label's fur coats and embellished dresses appear like cast members themselves. Painterly influences and sporty schoolgirls make unlikely bedfellows, but not for the ever-clever Mrs. Prada. 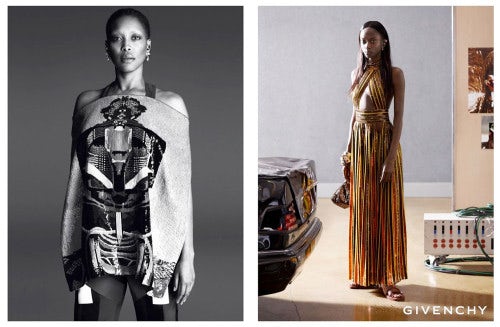 Riccardo Tisci has a well-deserved reputation for championing diversity in both Givenchy's runway shows and advertising campaigns. This season's campaign stars Grammy Award-winning neo-soul singer Erykah Badu, who also served as one of his original inspirations for the entire collection, flanked by relative newcomers Borges, Riley, and Chow. This also marks the third season that Tisci has cast artists, actresses and other non-models he admires for his campaigns. “It’s kind of a family portfolio,” he said. 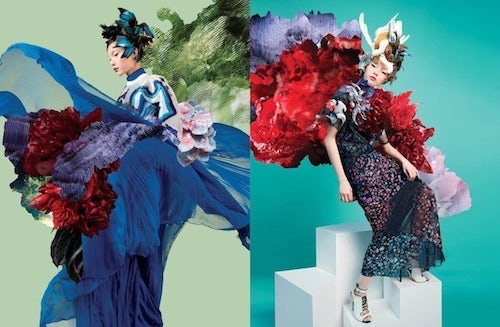 The only retailer to make the cut, Lane Crawford's floral-inspired "Botanica" campaign is a masterclass in lyrical drama and composition. Starring Chinese supermodel Xiao Wen Ju, wearing intricate headpieces made in collaboration with hair designer Katuya Kam, the images are set to inspire an 800-mannequin, botanical-themed store installation.