From amongst the multitude of Autumn/Winter advertising campaigns currently hitting fashion glossies, Internet forums and social media platforms around the world, from Facebook to Tumblr to Pinterest, The Business of Fashion picks the Top 10 Campaigns of the Season. Which fashion campaigns struck a chord with you this season?

LONDON, United Kingdom — Chinese cosmology is not often a uniting factor in the fashion industry. This season, however, Hermès, Lanvin and Alexander McQueen all paid homage to the Chinese calendar's Year of the Horse, which runs until next February. From shaggy Mustangs at Hermès to knightly destriers at Alexander McQueen and Dolly the horse at Lanvin (whose owner Edie Campbell appears on this list three times), many of the top campaigns of the season had a distinctly equine feel.

What's more, this season, several of the top campaigns were characterised by a distinct sense of innovation and evolution. Ghesquière evolved Louis Vuitton's fashion communications with the help of not one but three industry-leading photographers: Annie Leibovitz, Juergen Teller and Bruce Weber; interestingly, JW Anderson elected to reuse archival Steven Meisel imagery from 1997 for his first Loewe campaign, while our winning campaign of the season — Lanvin shot by Tim Walker — featured the entire Campbell clan. Perhaps most excitingly of all, four of the campaigns featured in BoF's top 10 are from designers and creative directors still in the first season of their current roles.

Without further ado, please enjoy our Top 10 Campaigns of the Season and let us know which campaigns you like most in the comments below. 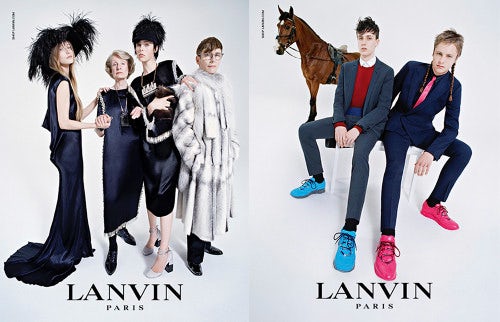 Edie Campbell and her entire family star in Lanvin’s Autumn/Winter campaign, an engaging return to form for the Parisian house. Art directed by Ronnie Cooke Newhouse, the campaign is “an updated idea on the Lanvin icon of a mother and daughter,” and features Campbell’s mother, former British Vogue editor Sophie Hicks and her horse Dolly. The campaign also stars the model's boyfriend Otis Ferry and her father, brother, sister, sister’s boyfriend and grandparents. The Campbell family affair was shot by Tim Walker, whose unexpected compositions compliment and enhance Alber Elbaz’s particular perspective, which saw the designer include motifs such as poppies, Celtic braids, dominos and feathers. 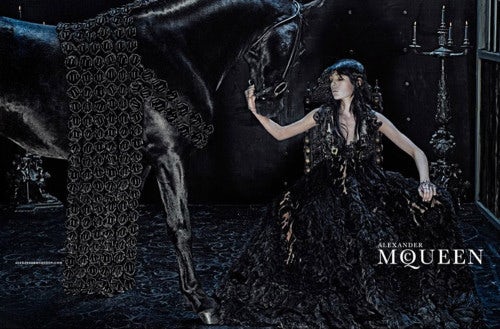 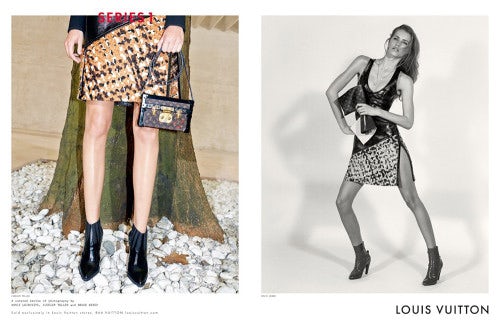 For his first campaign as creative director of Louis Vuitton, Nicolas Ghesquière called upon three of fashion’s most in-demand photographers to shoot “a curated series of photography,” dubbed ‘Series 1,’ possibly indicative that the designer and the house will continue with the multi-photographer approach in the future. This season Annie Leibovitz, Juergen Teller and Bruce Weber each lent their individual aesthetic to the campaign based on the theme of “four modern heroines” and featured actress and long-time Ghesquière muse Charlotte Gainsbourg, top models Freja Beha Erichsen and Liya Kebede, who both walked in the Ghesquière’s debut show for the house, Kirstin Kragh Liljegren and new face, British model Jean Campbell. The varying photographic styles highlight Ghesquière’s abiding interest in technical fabrication, which comes to the fore regardless of whose lens is shooting it. 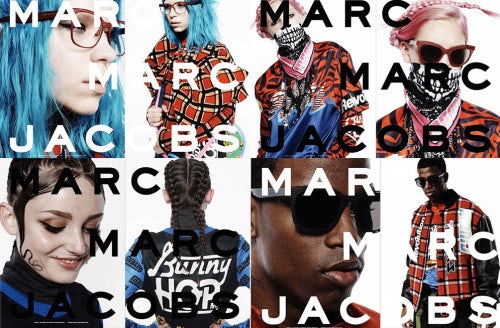 In the single season since Katie Hillier took the reigns at Marc by Marc Jacobs and rebranded it MBMJ, the line has regained its place as one of the most exciting shows in the New York schedule. The well-received collection’s accompanying campaign didn’t disappoint, and is arguably the pop-iest of the season. Hillier looked to Instagram for her campaign stars, Insta-casting the models for the David Sims shoot styled by Katie Grand. The show’s biker-girl, urban-warrior looks clothe sub-culture teenagers, replete with techno-coloured hair and markedly urban tilts. Marc by Marc Jacobs typography is emblazoned across the images, creating the perfect propaganda for Hillier’s counter-culture revolution. 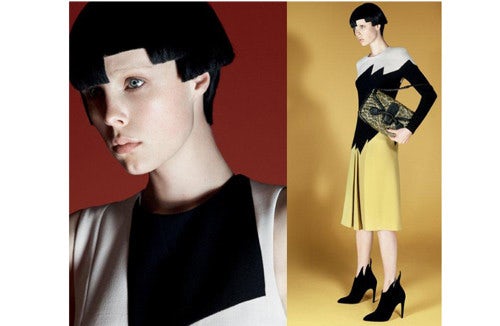 In her impressive third and final appearance in our top five, Edie Campbell models a monastic bowl cut, futurised and somewhat Vidal Sasson-ified by an artistic cut out above her bleached brow. The campaign is the latest iteration of Bottega Veneta’s “art of collaboration” series, and is the first time the Italian brand has collaborated with British photographer David Sims. Tomas Maier said of Sims, “We thought that his stark, pared-down aesthetic would be a natural fit with the graphic elements of this collection." Sims’ ability at capturing light gives Campbell’s close up a Vermeer-like quality. 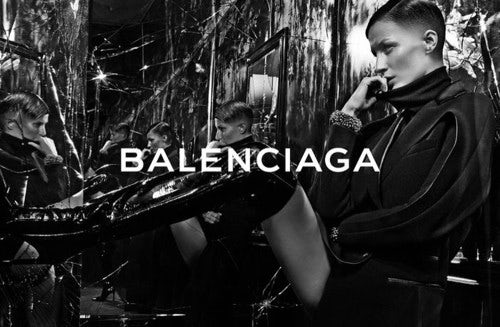 Alexander Wang focused on the underlying strength of the Balenciaga woman once again for Autumn/Winter 2014. Wang called upon Steven Klein to shoot the dramatic campaign and cast Gisele Bündchen to be this season’s face, telling press: “This is how I see Gisele for Balenciaga; strong, powerful, mysterious and uncompromising.” In the dramatic images a warrior-posed Bundchen appears with her hair shorn into a buzz cut, which set the digital sphere abuzz with commentary. In reality Bündchen was not forced to sacrifice her world famous mane, instead a body double was given the dramatic hair cut on set, shot, the resulting images were then digitally transposed onto a bald-cap wearing Bündchen. 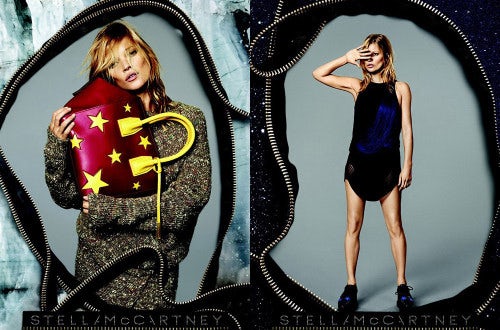 Stella McCartney often calls on her close friend Kate Moss to front her campaigns. The supermodel has fronted seven Stella McCartney campaigns since 2003, when she was first shot for the label. However, despite how prolific the pair's collaborations are, this season’s campaign remains a standout thanks to Mert Alas and Marcus Piggot’s enchanting art direction and photography. For the dream-themed campaign, which McCartney styled herself, Mert and Marcus' images were superimposed onto the night sky, glaciers and forests, in reference to the brand and its designer's commitment to the environment. 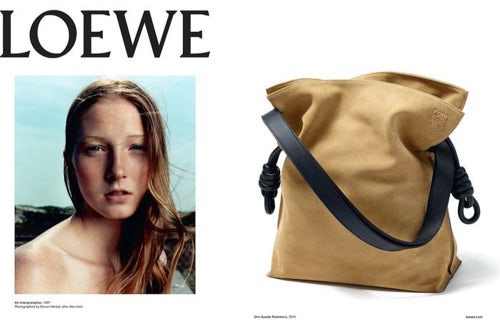 JW Anderson’s unexpected appointment as creative director of Loewe placed a young fashion forward, British designer at the helm of Spain’s only luxury house. The designer’s fresh and innovative campaign gave some indication as to the direction he intends to take the house in, over which the industry continues to animatedly speculate. The campaign features an unaltered archival Steven Meisel shoot from a 1997 Vogue Italia, starring auburn haired Maggie Rizer, juxtaposed with crisp product shots of Anderson’s new utilitarian designs for the house. The Meisel shoot, shot on location on the Italian coast, had particular meaning to the Northern Irishman, who chose to reuse it, rather than replicate it following discussion with the photographer. 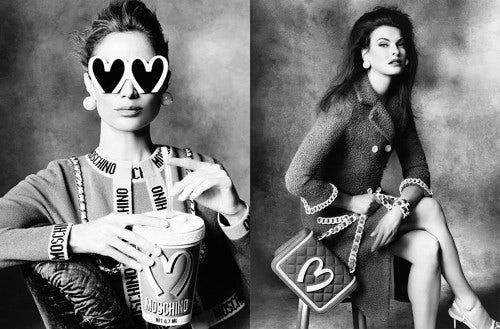 After its colour saturated show inspired by the golden, or rather sun-yellow, arches of McDonalds, Moschino’s dichromatic campaign came as quite a surprise. Lensed by Steven Meisel, the campaign features an eclectic group of top-models including supermodel Linda Evangelista, Raquel Zimmermann, Stella Tennant, Carolyn Murphy, Saskia de Brauw and Karen Elson. Although the composition and tone of the artist studio type group images has merit, the campaign's break-out shots are those of Evangelista and Murphy, both of which speak to creative director Jeremy Scott’s commentary on consumer culture. Like the show, the campaign is imbued with the thrilling precariousness of Scott’s tightrope balance between good and bad taste. 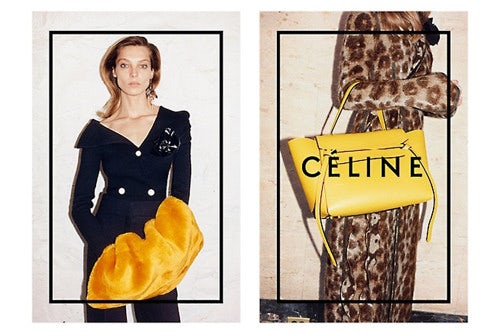 Phoebe Philo’s skill as a designer artfully managed her aesthetic about-face last season, in which Céline’s typically minimalist tones were scrapped for bold colours and Brassai brush strokes. This season’s collection was another step forward for the brand, perhaps not as bold as that of the previous season, but nonetheless representing a discernable shift in direction. And yet throughout these seminal shifts the surely-soon-to-be iconic Céline campaigns have remained largely unchanged. Once again the triumvirate of photographer Juergen Teller, model Daria Werbowy and stylist Camilla Nickerson were called upon to create the campaign; as they say, ‘if it aint broke, don’t fix it’.