The April 2014 cover of American Vogue, featuring Kanye West and Kim Kardashian, proves that media now belongs to the people — but Vogue is not dead, writes Bonnie Morrison.

NEW YORK, United States — At the risk of hyperbolising, the April 2014 issue of American Vogue, featuring Kanye West and Kim Kardashian, might have been the #worldsmosttalkedaboutmagazinecover. The last time anyone I have polled seems to remember anything remotely close to this kind of firestorm was when Vanity Fair put a fully pregnant and naked Demi Moore on the front of its August 1991 issue. But that was almost a quarter-century ago, when print was more powerful.

The reaction to Vogue’s “Kimye” cover, shot by Annie Leibovitz, was instantaneous and explosive: the temple has been desecrated; the terrorists have won; Vogue is dead. But the cover may represent the death of one thing and the birth of another. Kanye and Kim's cover is a feat that would dazzle any mystic: it is Vogue rising out of the ashes of Vogue. 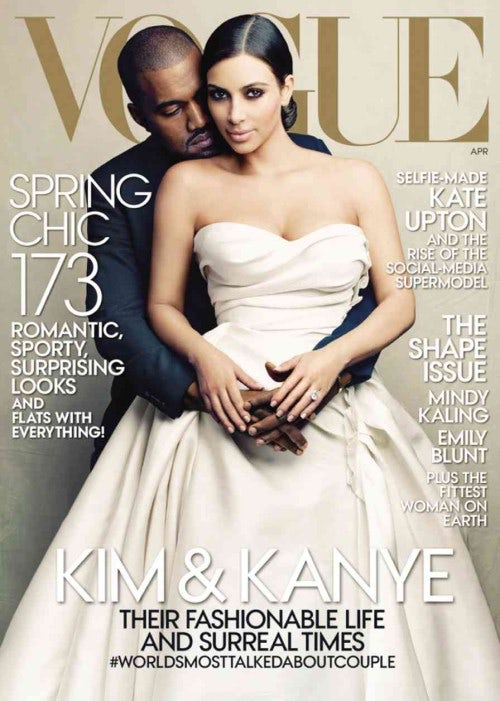 First, permit me to say that the only image in the Kanye and Kim story that really appears new is the cover. The pictures inside the book have a manufactured quality. The self-absorption that is the couple’s chief export is on extravagant display: if it wasn’t boring, it would still be familiar; and if it wasn’t familiar, it would still be boring. Even the things we see them do — Kimye aboard a private jet, canoodling on his Lambo, Kanye taking a picture of Kim taking a picture of herself — are activities we have probably already seen them engage in — and many times.

While Vogue’s interest in a celebrity or social figure used to create stars, now it merely reflects them.

Many of us reading Vogue today are not too old to remember that Vogue was once about summoning its profound resources to do things differently than everyone else. It teased out of well-known and even unconventional magazine cover subjects radiant beauty and supreme confidence, showing us things we had never seen, or known we could see. It renovated, then drew back the curtain on a sleek, fit Oprah; a regal Hillary Rodham Clinton. More recently, a gamine Lena Dunham was coaxed (finally!) into donning a cheerful finger pat of lipstick and a delicate fringe of eyelash. A feisty yet serene Jennifer Aniston went on the record — and, like that, became the best friend of every living female. "What Angelina did was not cool."

But, as in the case of the Kimye story, when images that don't feel new are treated in a way that doesn't feel new, we wonder yet again: what is a magazine really for, in today’s world, anyway?

In a portfolio where every surface is really just a mirror — not the true thing, a picture of a picture — finding out where “the real” resides is a matter of gathering information (Was it retouched? Did it really happen? Are they still together?) — and that is what the Internet is for. By its very nature, the Internet gives us minimally mediated, new and hard to fake, leaving this just released issue already feeling a bit like a yearbook.

And when you examine Vogue’s historic role in culture production a little more closely, the Kimye story is an even bigger cheat for some, because Vogue — with contracts with the most venerated photographers in the world; direct connections to the most respected celebrity agents, managers and publicists; budgets for the most elaborate sets and exotic locations, the ability to have its every wish granted by the most influential designers and obsessive-compulsive insistence on exclusive ownership of any kind of intellectual property — should, and did, use that muscle to break, not only models, but also stars of the screen and society. Vogue did it first, or not at all. But what the Kanye and Kim cover confirms is something we have all known for a long time, but haven’t wanted to fully admit: that the media now belongs to the people. While Vogue’s interest in a celebrity or social figure used to create stars, now it merely reflects them.

However, through equal measures of old-fashioned PR and message control, combined with a pretty sophisticated understanding of how to market this revolutionary product via social media, Vogue reminded an entire industry what its true business really is: selling magazines, as well as giving people a reason to read them.

So the rules of who and how and why have changed. So what? That’s what rules do. And characters people love to hate often make for great results at the newsstand and online. So no, Vogue is not dead. Vogue is not even convalescing. It’s evolving — which is the only way to survive.

Bonnie Morrison is a public relations and communications professional based in New York.