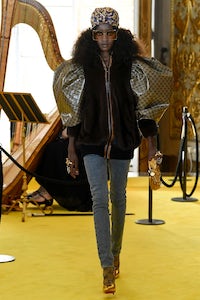 LONDON, United Kingdom — In the age of social media, criticism can quickly spiral into a virtual lynch mob: a digital judge, jury and executioner all wrapped into one. A Chanel boomerang, you say? Burn 31 Rue Cambon to the ground! An accusation of mistreatment from a model on Instagram and Facebook? Send death threats to the children of the casting director! Gucci’s reference to Daniel “Dapper Dan” Day, the man who himself bootlegged the Italian brand in the 1980s? How dare they! Death to Alessandro Michele! It’s fashion’s Nazi party!

Following the Italian brand’s Cruise 2018 show in Florence on Monday night, the digi-sphere picked up on a look that is quite clearly a Gucci-fied nod to one of Dapper Dan’s designs, a jacket with puffball sleeves of monogrammed Louis Vuitton leather and a brown mink bodice. Some have called Gucci’s take on the look “shameful” while others have characterised it as the latest instance of a major brand pilfering from black creatives.

But here’s the thing: without Gucci, there would be no Dapper Dan as we know it today. The brand is as much a part of Dapper Dan’s story as Dapper Dan is to theirs, and Michele’s nod to both seemed to be sincere and clear for all to see. What’s more, the topsy-turvy is-it-real-or-fake sensibility of Michele’s aesthetic chimes with the DIY sensibility of Dapper Dan. And when Michele wove the reference into his Renaissance-themed show, he placed Dapper Dan on the same echelon as master painters Botticelli and Titian, who were also points of inspiration. Indeed, if anything, the Gucci look could be seen as a letter of acknowledgement to the man who bootlegged the brand way back when.

The Dapper Dan-inspired look follows Gucci’s all-black 2017 Pre-Fall campaign which also borrowed from the New York hip-hop scene of the late 1970s, as well as the Northern Soul movement in England. Here again, Gucci’s message seems clear and uplifting: black culture deserves to be at the forefront of a multi-billion dollar brand.

So why exactly has there been such a backlash? And, moreover, at what point does this kind of pressure kill a creative’s license to take risks?

Perhaps the key to the riddle is in the word itself: appropriation. In recent years, it has become associated with the violent pilfering of non-Western cultures and sacred symbols, policed by a self-proclaimed “Generation #Woke.” But what they’re really referring to is mis-appropriation: when the act becomes superficial or exploitative.

Well-intentioned appropriation can be a force for good, creating a cultural exchange and enriching the available vocabulary for designers, artists and image-makers — even for chefs, filmmakers and architects. It can be an engine that drives culture forward and breaks down borders and divisions, rather than dividing them.

Who could argue against fusion cuisine? Or that by eating food from other cultures, or even attempting to cook it at home, we are guilty of cultural misappropriation? Consider where the music industry — especially hip-hop — would be without sampling and cultural remix. Certainly, without cultural appropriation, the world would be a much more boring place. Indeed, the cross-pollination and growth of culture itself would be stunted; limited to narrow fields of tightly defined heritage.

Fashion, in particular, thrives on appropriation. When Chinese designer Guo Pei looks to the Imperial history of her countrymen and exaggerates and romanticises it to brilliant effect, the results are profound, and non-Chinese designers should be free to do the same.

Without the freedom to embrace fantasy, curiosity and interpretation, borders remain closed and the codes of stereotypes remain intact — and what could be more regressive than that? Just as languages grow through the inclusion of foreign words, so too is the network of images, crafts and references enriched by exchange and appropriation. Cultural evolution and creativity depend on it.