BARNARD CASTLE, United Kingdom — "When opportunities like this arise, there can only be one answer: Yes!” says Joanna Hashagan, curator of fashion and textiles at the Bowes Museum in County Durham in the north of England, as we walk around the institution’s unexpected collaboration with the Fondation Pierre Bergé - Yves Saint Laurent, which opens on July 11th.

Just about every aspect of Yves' groundbreaking work is displayed in this exhibition: masculin/feminin, exemplified by the controversial 'le smoking’ tuxedo for women; the designer’s homage to the great painters, including his famous Mondrian dress and Van Gogh sunflower embroidery; hippies, Africa and a wide range of great looks that are now commonplace but hardly dreamt of before he wove them into the language of fashion and the wardrobes of millions of women. In addition to more than 50 looks from Yves Saint Laurent’s career as a designer, the exhibition includes cut out paper dolls from his teenage years, for which he organised fashion shows attended by his two sisters, who would later place orders as if they were his clients. 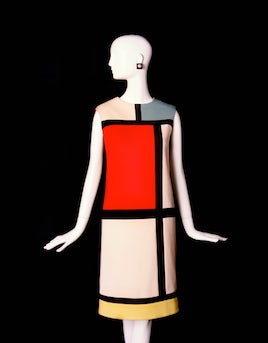 “The primary mission of the Fondation Pierre Bergé - Yves Saint Laurent, which was created in 2002 after the haute couture house closed, is the conservation and promotion of Yves Saint Laurent's body of work,” said Pierre Bergé, the designer’s partner in business and life. Right from the very beginning, he carefully kept the most important garments (nearly 60,000), accessories (15,000) and drawings (55,000), as well as photographs and audio visual recordings, resulting in what Bergé called an archive that "no other couture house currently possesses [which] makes it possible to recount the forty year design history of the most important couturier of his time.”

The Bowes Museum, a replica of a French chateau situated in the northern English market town of Barnard Castle on the border of Yorkshire and County Durham, seems a fitting — if unexpected — venue for this exhibition. Not only is fashion beginning to encompass country as well as city, it seems entirely right that Yves Saint Laurent, known for his passionate commitment and sense of drama, should have an exhibition in the north of England, an area known for the passion and boldness of its people, and the rugged grandeur and beauty of its uncompromising weather and landscape, making for a perfect dovetailing of elemental forces. 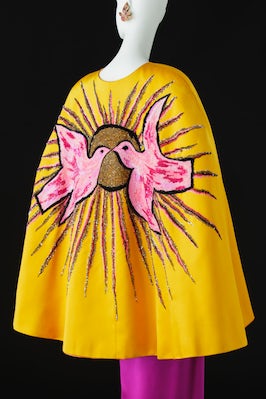 The exhibition is clearly a coup for the museum, which is sure to benefit from the growing interest in fashion and the impact Yves’ designs can have on members of the public. For those of us privileged to see the 2002 final retrospective catwalk show of Yves Saint Laurent in the Pompidou Centre in Paris, it was an eye-opener to witness the audiences who were watching on big screens in the street, including many men, crying openly at the beauty of it all.

Personally, my favourite Yves Saint Laurent moment — apart from meeting the man at his office, suspiciously watched by his dog, Moujik III — was the 1983 retrospective of his work staged by the Metropolitan Museum in New York, the first time a living designer was so honoured. Its curator, Diana Vreeland, coined one of my favourite comments on Yves of all time: “Follow Yves down the garden path, there's always a pot of gold at the end!” Everyone who goes to the Bowes Museum is sure to share that pleasure as they learn more about one of the world's great designers who worked so brilliantly in what he once described as “a métier that is not quite an art, but which needs an artist in order to exist!”