Smart retailers are tapping into the power of the pop-up shop to study customers, test new business ideas and much more, writes Thomas S. Robertson.

PENNSYLVANIA, United States — Here today, gone tomorrow: pop-up stores are nothing new. There have been iterations of ephemeral, temporary shops throughout history, beginning with ancient open-air markets to seasonal Halloween stores that popped up in the 80s.

In fact, Steven Silverstein, chief executive of Spirit Halloween Superstores, once called his company the “granddaddy of the pop-up store.” Every autumn, Spirit operates 1,200 temporary retail locations across the US and Canada, and in those two months, the company generates a whopping 50 percent of its annual revenue.

But today’s pop-up is hardly about smashing annual revenue numbers. Much as a Silicon Valley start-up might release a prototype or beta version to study user feedback, many retailers are treating their pop-up stores as a way to test, learn and iterate on new ideas.

To some, it’s about testing a hypothesis or validating a new concept. To others, it’s about evaluating new markets, studying consumer behaviour or collecting actionable data to inform marketing strategy, R&D and business decisions. But for most, it’s still about building brand recognition, engaging new and loyal customers, and igniting social media and PR buzz.

Over the past few years, I’ve watched the pop-up market grow up before my eyes. I’ve seen both luxury fashion houses like Prada turn to pop-ups to gain a competitive edge. I’ve seen young startups like Of Mercer use them to establish a foothold in a new market. There’s also Warby Parker’s Neil Blumenthal and Dave Gilboa, Allbirds’ Joey Zwillinger and Snowe’s Rachel Cohen and Andres Modak who have transformed their pop-ups into roving retail test labs.

So what has all this “popping up” taught retailers? A lot, actually.

1. A chance to study consumers in their natural habitat

In my research of pop-ups, I learned that the reason many brands invest in temporary, ephemeral stores is to reach a slightly different demographic segment than their mainstream consumers; for example, people who might otherwise be intimidated by the brand’s flagship store, customers who are drawn in by social buzz or passersby intrigued by a line around the block. (Glossier’s makeup and fried chicken-themed pop-up shop and Diesel’s faux Canal Street knockoff store are two great examples of the marketing power of a long line.)

Unlike permanent stores, pop-ups represent a fleeting moment in time to study both loyal fans and new prospects in an environment where they may be more primed to engage and interact with a brand more intensely.

It’s not enough to promise a delivery at [a customer's] doorstep in a few days.

Direct-to-consumer sneaker brand Allbirds, for instance, has a trove of data from their e-commerce site, but consistently looks to the interactions between pop-up store associates and customers to “colour in what we see from online customers,” co-founder Joey Zwillinger said. “Interacting with our customers in a physical setting has taught us a lot about their preferences and shopping behaviours.”

In fact, his team realised early on that a customer’s first try-on was a crucial moment in the company’s brand story. Of course, when you sell shoes made of sustainably sourced wool (and now wood pulp!), that first product interaction is a make-or-break moment. For customers who instantly fall in love, Allbirds learned that it’s not enough to promise them a delivery at their doorstep in a few days. These customers want to walk out the door with a pair on their feet.

“After a number of tests, we learned that we had to carry enough inventory in our stores to satisfy this crucial customer need,” said Zwillinger. He says it’s a lesson that has empowered the company to launch a pop-in program with Olivia Kim at Nordstrom, as well as their first Canadian pop-up location in Toronto.

In her coverage of New York Fashion Week last year, Vogue Runway director Nicole Phelps wondered whether “pop-up shops have become the new fashion show.” It makes sense. Like the fashion show, pop-ups are meant to be dramatic, limited-time events designed to tap into what researchers have learned about our innate attraction to “newness and novelty.”

It’s what guided Warby Parker in their initial foray into pop-ups nearly six years ago. First, there were holiday-themed yurts. Then came a vaudeville circus. Since then, they’ve launched pop-ups featuring everything from vintage newsstands to a “class trip,” a store built into a yellow school bus that visited 15 cities.

“With every pop-up, we want to give people a reason to come in,” said co-founder Dave Gilboa over the phone. “Sure, we want to generate sales, but we also want to ensure we’re able to gather enough data points to generate meaningful learnings.”

He compared his company’s pop-up strategy to the “agile” approach to software development, where you release a product and then test, learn, iterate and refine along the way. 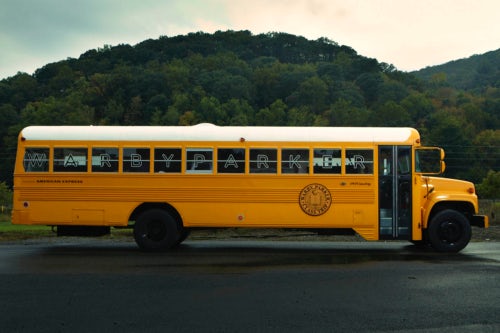 One learning that came from their pop-ups? How people actually like to shop for glasses. In their yurt-themed pop-up, for example, frames were displayed on floor-to-ceiling shelves. But you’ll never see that in a Warby Parker store today. “It might seem obvious, but it’s hard to shop for glasses when some are displayed at knee level,” said Gilboa.

They also never display more than three frames on a shelf. “We learned that a wide shelf with too many glasses is a frustrating shopping experience.”

Like many other direct-to-consumer retailers, Warby Parker has found pop-ups to be one of the best test labs to determine optimal locales for permanent brick and mortars. For example, when the Warby Parker school bus rolled into Washington, DC, they set up shop on Wisconsin Avenue and M Street. “That block was, by far, the most successful stop on the entire tour,” said Gilboa. “We had a hunch that a permanent store there would do just as well.” They were right. Today, it’s the company’s best performing location in the country.

This strategy has become so commonplace, in fact, that real estate industry has started referring to the trend as “pop to perm.” Today, Warby Parker operates 46 physical retail stores and plans to open 25 more this year alone.

3. Data you could never collect online

The beauty of capturing data in real life (IRL) is that face-to-face interactions are authentic. They’re real. While retailers can extract loads of valuable consumer data from studying clicks, dwell time and abandoned digital shopping carts, the pop-up scenario is unique.

Rachel Cohen, who co-founded direct-to-consumer home brand Snowe, admits that pop-ups can be a “goldmine” for any retailer seeking to better understand their customers. “Customers will share details and insights in-person that you’d never be able to capture online,” she said. “Often you can only draw out these deeper, nuanced insights from human interaction.”

When they launched The Whitespace, a shoppable loft space in New York City, they set out to gather IRL feedback on technologies they were considering. “One platform we’re testing allows us to send personalised, shoppable wish lists to customers following their visit,” said Cohen. “Both store associates and customers love it — and not just for the convenience. It establishes that strong, personal relationship right away and provides the perfect opportunity for the next interaction.”

So, what does the pop-up future hold?

There’s a convergence of economic realities fueling the pop-up trend. Real estate firms are more flexible about short-term leases, commercial landlords welcome any way to fill vacant storefronts left in the wake of online competition, struggling shopping malls are desperately seeking new ways to drive foot traffic and consumer expectations for a seamless “omnichannel” experience are at an all-time high.

But despite this perfect storm, retailers should heed Coco Chanel’s advice when investing in a pop-up strategy: “Fashion is what goes out of fashion.”

If the key to a successful pop-up is one that offers consumers both an ephemeral opportunity and a novel experience, then its future depends on retailers knowing when to pack up and move on. Hermès, for instance, ran a series of successful pop-ups in New York, DC and Nashville where guests could opt to have their signature vintage scarf dip-dyed in a bespoke “Hermèsmatic” machine. Last November, the brand hosted their final pop-up in Los Angeles and said goodbye to the machine and the pop-up concept, once and for all.

My pop-up advice? Surprise, delight and learn every single thing you possibly can about your loyal fans and curious new customers. Then move on.

Thomas S. Robertson is the Academic Director of the Baker Retailing Center at the Wharton School of the University of Pennsylvania.

Editor's Note: This article was revised on 20 June, 2018. A previous version of this article misstated that holiday-themed yurts came first and then came the "class trip." This is incorrect. First, there were holiday-themed yurts, then a circus, and then came the “class trip.” The article further misstates that Warby Parker nixed hand-held mirrors when they learned that many pop-up customers preferred using a floor-length one. This is incorrect. Warby Parker still has hand-held mirrors in addition to the full length ones throughout their stores.