You Can’t Predict the Future of Retail, but You Can Prepare for It

In an exclusive excerpt from his new book, ‘Resurrecting Retail: The Future of Business in a Post-Pandemic World,’ Doug Stephens outlines the common pitfalls to which business leaders fall victim when tasked with devising strategies for the future.

You Can’t Predict the Future of Retail, but You Can Prepare for It

In an exclusive excerpt from his new book, ‘Resurrecting Retail: The Future of Business in a Post-Pandemic World,’ Doug Stephens outlines the common pitfalls to which business leaders fall victim when tasked with devising strategies for the future.

From above, it’s difficult to comprehend the sheer scale of what you’re looking at. You see only an ocean of white and grey curtains, aluminium framing, and acoustic tile stretched out across the cavernous space.

In the spring of 2020, the Corps of Engineers helped New York City assemble this facility to provide beds for over two thousand people affected by the COVID-19 virus. It immediately became one of the largest medical facilities in America, substantially greater in capacity than any other neighboring hospital.

It’s challenging to conceive that only three months earlier, the makeshift field hospital was a convention center, home to one of retail’s largest annual global pilgrimages: the National Retail Federation’s Big Show, held each January in New York City. I had been there in January, along with colleagues from all corners of the globe —37,000 of us gathered in its halls, atriums and auditoriums to discuss the fate and future of the retail industry.

Amidst the countless collegial handshakes and hugs, shoulder-to-shoulder lineups, and close conversations held in noisy session halls, few of us could have imagined that only weeks later such basic human behaviours would be widely discouraged, even forbidden. Like reveling passengers on the Titanic, we saw no omens or warnings that the global retail industry was about to collide with an obstacle so large and immovable that it would rip it from stem to stern.

Today, with the start of mass vaccination programs, it’s reasonable to assume that some kind of rebound is within our sights. But while we will surely return to something, the chances of that “something” being the pristine pre-pandemic business world as we knew it are remote at best. We may have to live with a lingering risk of flare-ups for some time.

To that end, before we go any further, it’s worth understanding the common pitfalls that business leaders fall victim to when tasked with building strategy for the future.

Why We Get the Future Wrong

When we attempt to envision the future, the first reason we get it wrong is that we are often drawn into a state of short-termism, focusing on myriad seemingly critical questions that, in the end, are likely to have limited long-term relevance or business impact. Here are a few that have come up frequently about the pandemic:

All these things are relatively foreseeable. I’m not trying to dismiss them, but I also can’t help minimising them, because in the long term these are not the things that will blindside most businesses. These short-term concerns, while relevant, are not what ultimately consume an industry. It’s the really big change that happens while you’re minding the little stuff that wipes out a business and even whole industries.

Therefore, wise business leaders will be casting their gaze much further ahead to identify the deeper and more endemic changes to the retail landscape and customer behaviour. This book is aimed at providing such a vantage point.

The second risk is myopia, the inclination to look to a narrow view of your own industry or category for all the answers with respect to emerging customer behavior. Retailers will tend to focus solely on retail, hoteliers on hospitality, bankers on the financial sector. Even worse, within categories, shoe sellers will look at other shoe sellers, electronics retailers at other electronics retailers. Before you know it, executives are looking at the universe through a pinhole. It’s a natural response to look for the danger on your own doorstep, but looking inside only your own category or industry tells you little about the more momentous changes in the customer, society, or broader retail market.

Next, there’s a tendency, when attempting to divine the future, to quite crudely extrapolate the present, as journalist Rob Walker put it recently on Marker:

“Anything is possible but take a closer look at how often definitive predictions about permanent change are simply extrapolations of recently observable trends taken to some maximum extreme. In other words, the future will be like this new present — only much more so.”

He’s absolutely right, and we do this because the present is infinitely more comfortable for most of us than the future. The present is familiar and quantifiable, just the way most business managers like it. It’s far less daunting to simply extrapolate what we already know and understand than to have to cross into the realm of abstraction and projection. Managers tend to gravitate to the statistical, verifiable, and provable. The future provides none of these empirical guardrails — but we have to prepare for it nonetheless.

To sum up, the future doesn’t really care if we’re comfortable with it or not.

Will people abandon cities or not? Will we educate our children online, or will they remain on campuses and in classrooms? Will customers still shop in physical stores or not? The media loves questions like this because they make great headlines. The problem with these sorts of questions is that they treat the future as a binary argument. But change, as I have discovered, is rarely absolute, nor does it have to be in order to have significance in our lives. A business need not lose all its customers before it goes out of business. Likewise, a company doesn’t have to sell to everyone in order to become wildly successful.

In other words, change can be fractional and yet still change everything.

Everyday, we are being deluged with data on a wide variety of subjects and issues. It’s important to recognise that there are two distinct kinds of data. If you’re a data scientist reading this, I apologise in advance for generalising. I know data encompasses far more than two kinds, but in my world, only two matter: instances and patterns.

Instances can involve anything: developing medical facts, economic reports, or industry news. If they’re significant enough, instances can also alter the course of events, sometimes dramatically. The incident involving the assassination of Franz Ferdinand, for example, set the wheels of World War I in motion. The incidents that took place on 9/11 brought decades of instability and war in the Middle East, a barrage of terrorist attacks, and ever stricter air travel protocols.

But while such isolated instances can lead to broader change, they are inherently unpredictable and undependable as a means of forecasting the future. Predicting the next instance of something happening is close to impossible — that is, unless it becomes an identifiable trend.

Trends are, by definition, simply patterns across a range of instances. Patterns within medical data, economic reports, or industry performance form a trend. And trends ultimately change things. Case in point: the death of George Floyd at the hands of Minneapolis police on May 25, 2020 was a tragic incident. But the reason that it sparked global protests was that it was part of a long and obvious pattern. The incident caused outrage, but the pattern is what sparked the change in public perception and reception to calls for racial justice.

For retailers, patterns found in completely different industries and categories can be even more important than those in the retail industry. Could a pattern of technological advancement in the live entertainment industry inform the future of retail? Could a pattern of innovations in healthcare? In education? All such influences are entirely possible. So rather than looking for the future under a microscope, it’s better to use a radio telescope that listens intently to the entire universe of change taking place as we speak. We can do this only by raising our heads and peering out farther onto the horizon.

The Myth of Black Swans

The theory of black swan events was developed by the essayist and scholar Nassim Nicholas Taleb to describe events that are unpredictable yet highly disruptive, events for which there is no historic precedent that would allow us to anticipate them. By Taleb’s definition, Covid-19 was not a black swan.

We know this because while most companies were scrambling to react to the pandemic, other companies were following plans that had been engineered, years in advance, for just such a crisis. Intel Corporation, for example, has had a standing committee on pandemics for almost twenty years, formed during the 2003 SARS outbreak. When Covid-19 emerged, the committee was activated into a task force, empowered with learnings from previous pandemics, vastly speeding Intel’s response.

Your organisation has the same capability, but harnessing that capability means formalising and internalising responsibility for organisational intelligence. This is precisely why every business should have a person or persons whose role should be to do nothing but staff the organisational crow’s nest, monitoring the horizon for anything and everything that could impact the course of the company. When the potential for any threat is identified — particularly one with the magnitude of a pandemic — it’s up to the organisation to monitor that threat and build contingency plans to deal with it, should it transpire.

We’ve Never Been Here Before

As an industry, we’re already beginning to stumble into some of these pitfalls. For example, some people are already engaging in extreme presentism, framing the changes taking place in the retail industry as a mere “acceleration” of trends that were already underway. “Nothing to see here folks! All just stuff that would have happened already!” I couldn’t agree with this statement less. I feel it’s intellectually lazy, not to mention perilous, to adopt such a position. In fact, as long as we regard the pandemic under this sort of fatalistic lens, it blinds us to the deeper, unique, and unprecedented societal and industry changes taking place. Changes that could have happened only as a result of this pandemic. Changes that will not simply speed the arc of retail history but alter it entirely. A retail butterfly effect, if you will, on a massive scale.

What I discovered in this crisis was not merely an acceleration but a once-in-a-century wrinkle in time, a wormhole leading to an entirely different era of retail, an era that will bring new societal norms, consumer behaviours, and competitive threats — not just for retail businesses but for all businesses. When we look back, we’ll see that the pandemic was an evolutionary turning point, allowing some retailers to scale to new and, in some cases, disturbing proportions. Others, sadly, will succumb to corporate Darwinism.

However, what I also found was a narrow but crucial window of opportunity for brands with courage. The courage to forge new customer value, purpose, and relevance. The courage to see Covid-19 as not only a cataclysm but also a catalyst for positive change.

Such courage will require leaders with the temerity to, in kinship with the Spanish explorer Hernán Cortés, burn the ships that brought them to this new place. There is no going back.

Excerpted from ‘Resurrecting Retail: The Future of Business in a Post-Pandemic World’ (coming April 2021) by Doug Stephens, the founder of Retail Prophet and the author of three books on the future of retail. 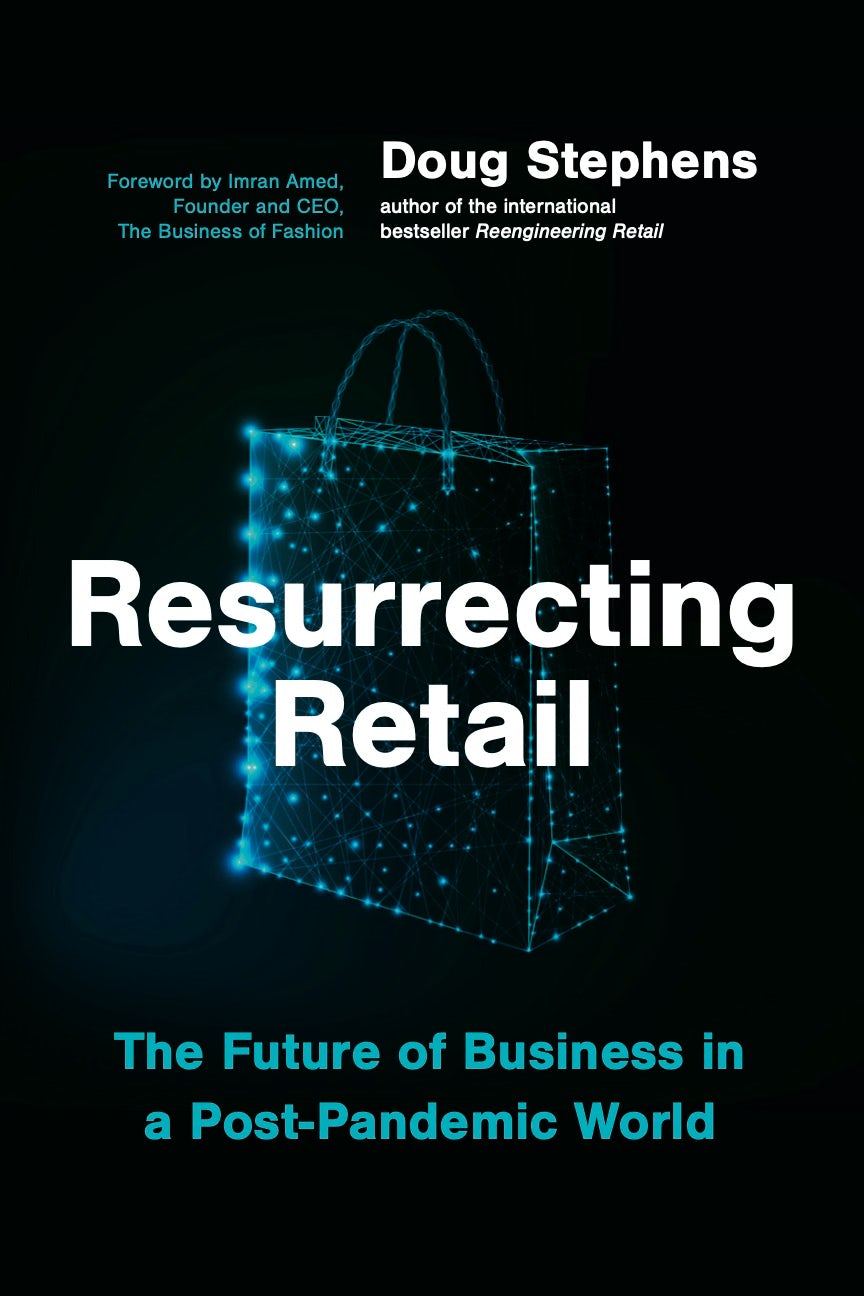