The Year Ahead: Diminished Demand Is Here to Stay

With consumer demand for fashion unlikely to bounce back in 2021, companies should seize new opportunities and double down on outperforming categories, channels and territories.

The Year Ahead: Diminished Demand Is Here to Stay

With consumer demand for fashion unlikely to bounce back in 2021, companies should seize new opportunities and double down on outperforming categories, channels and territories.

Few fashion companies were spared from a fall in consumer spending as demand for discretionary goods plummeted during global lockdowns. As a result, the entire fashion industry revenue pool in 2020 will shrink by 15 to 20 percent in an Earlier Recovery scenario, or by 25 to 30 percent in a Later Recovery scenario, according to McKinsey Fashion Scenarios analysis (based on information available September 2020). This reflects the extreme severity of the global recession, which has been described by the International Monetary Fund (IMF) as the worst since the 1930s Great Depression.

However, the impact on the fashion industry will be uneven. Europe is expected to be the worst-hit region in 2020, witnessing a 22 to 35 percent decline in sales, followed by the US with a 17 to 32 percent decline. China will likely be less impacted, seeing sales drop by 7 to 20 percent.

Results from McKinsey’s consumer sentiment surveys support this prognosis. Consumer intent to shop for apparel, footwear, accessories and jewellery in September 2020 was still down by 27 to 35 percent in the US. Meanwhile, consumer intent in China, which is further ahead in its recovery, turned to positive 4 percent in June.

A full recovery of global fashion sales to pre-crisis levels will not come until the third quarter of 2022 at the earliest.

The challenging environment born out of the unprecedented events of 2020 will linger into 2021, with global fashion sales projected to be below 2019 levels by as much as 15 percent in the Later Recovery scenario. A full recovery of global fashion sales to pre-crisis levels will not come until the third quarter of 2022 at the earliest, according to McKinsey’s Fashion Scenarios. Indeed, fashion is expected to be among the slowest-recovering discretionary spend categories.

“Undoubtedly the apparel market has shrunk in 2020. People aren’t shopping in stores — they’re sitting at home questioning why they have so many items in their closets,” said Elizabeth Spaulding, president of US-based online personal styling service Stitch Fix, which laid off 1,400 stylists in California and is hiring or relocating 2,000 stylists across other US states throughout 2020. “We’ve just seen extraordinarily accelerated demand [since June and] some of the highest retention rates that we’ve seen in many years, which we think is a signal of people saying, ‘this is the way I want to shop in the future.’”

There are other shards of light among the gloom, with spending in some regions expected to pick up faster than others. Fashion sales in China are predicted to return to pre-crisis levels by as early as the fourth quarter of 2020 or, at the latest, by the first quarter of 2021. In the Earlier Recovery scenario, European fashion spend will partially recover in 2021 (down by only 2 percent to 7 percent compared with 2019), with Germany as a bright spot that could reach pre-crisis spending levels by the third quarter of 2021. However, the US appears set for a slow recovery in 2021, with fashion sales 7 percent to 12 percent down from 2019, even in the Earlier Recovery scenario. 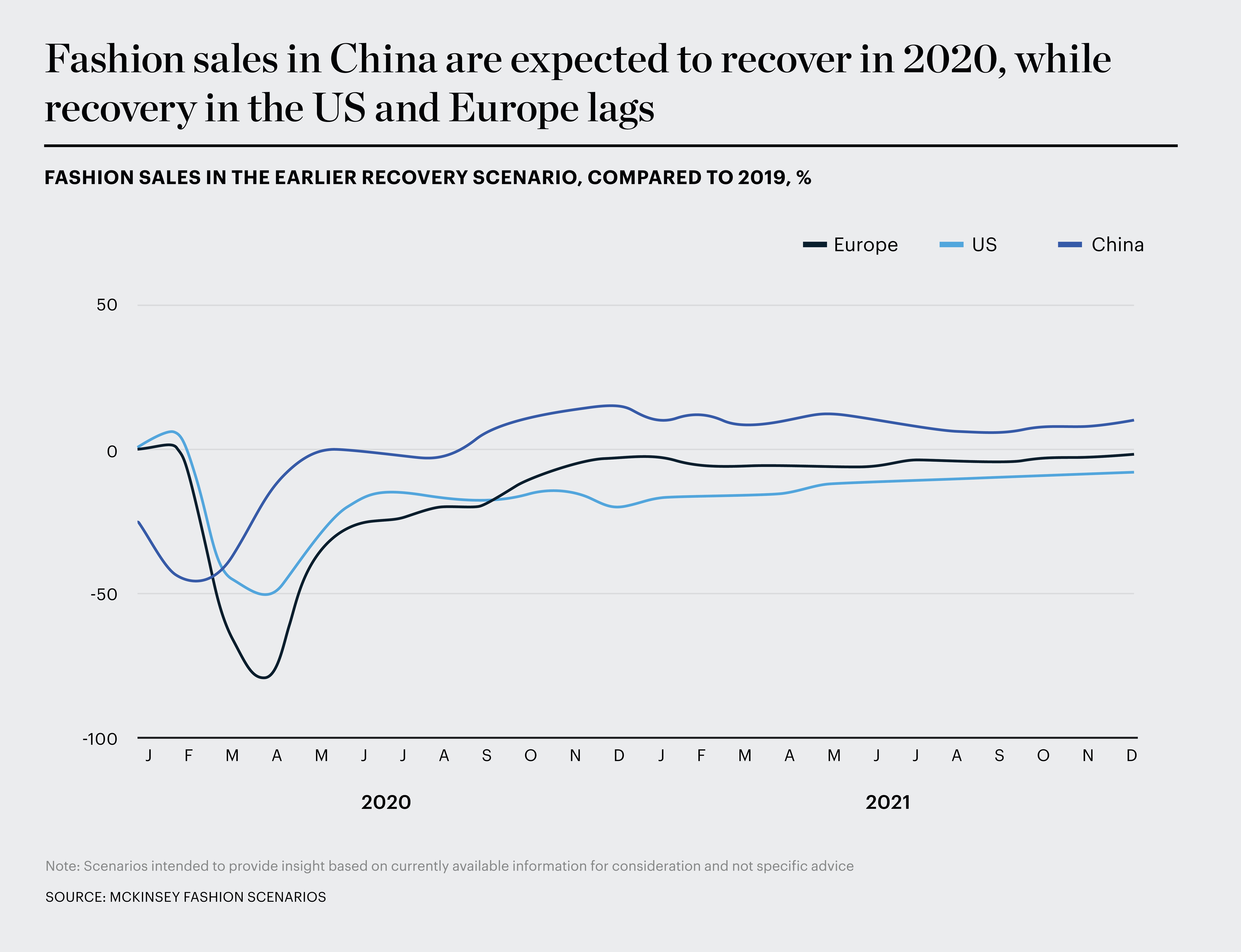 The pace of recovery will also vary across fashion categories and value segments, with some pockets of growth despite the continuing economic challenges. Looking at market valuations, the value and discount segments are the healthiest. By October 2020, value and discount players had a market capitalisation of 5 percent more than in December 2019, while the same figure was -12 percent for luxury companies and -16 percent for the value segment. This reflects longer-term industry trends towards polarisation across value segments.

Earnings reports suggest the luxury segment in fashion suffered less than others in early 2020. Luxury revenues and margins were down 26 percent and 15 percentage points respectively in the reporting quarters falling between February and June, while the overall market was down 34 percent by revenues and 21 percentage points by margin.

Indeed, appetite for expensive discretionary items is still high among some wealthy consumers and is expected to remain so in 2021. Kering has reported a steady recovery in mainland China, with some brands returning to growth already, while store re-openings there suggest there has also been a release of pent-up demand for luxury. Indeed, China is driving recovery in the luxury segment as Chinese luxury sales already recovered to 2019 levels in the second quarter of 2020 and are estimated to be up 10 to 30 percent in 2021, in comparison to 2019. This reflects a shift of luxury spend into China, while the other major economies will take longer to recover.

At the other end of the scale, growing inequality and financial uncertainty are prompting consumers to seek out value. The IMF is among the organisations to note that Covid-19 is likely to increase income inequality, with poorer people more vulnerable to furloughs and layoffs and less able to work from home. Overall unemployment is estimated to be 50 to 83 percent higher in OECD countries in 2021 than in 2019, depending on scenario. Some 20 percent of US consumers expect the crisis to affect their personal or household finances for more than a year, and 27 percent say they will trade down to more inexpensive items to save money.

Appetite for expensive discretionary items remains high among some wealthy consumers and is expected to remain so in 2021.

Lockdowns and restrictions on movement have strongly influenced consumer choices around what to wear, too. The formalwear category, which was slowing down prior to the crisis, has been on a steeper downward slope since the pandemic started. Many players have been suffering, with Brooks Brothers filing for bankruptcy, Hugo Boss reporting a year-on-year sales decline of 59 percent in the second quarter, and T. M. Lewin and Moss Bros closing stores, citing customers working from home and cancellations of major events as the cause of the decline in suit shopping. According to the BoF-McKinsey State of Fashion 2021 Survey, 68 percent of fashion executives expect shopping for occasion wear to recover earliest by the end of 2021, while in formalwear, as many as 38 percent say it will never return to pre-Covid-19 growth levels. Stefano Canali, president and chief executive of the luxury menswear brand Canali, said in June 2020 that he believes the classic, traditional suit is “definitely in a deep crisis” that will outlast the pandemic.

We expect increased consumer interest in health and wellness to persist beyond the pandemic, meaning demand for athleisure and activewear will likely continue to be strong in 2021. Athleisure and activewear brands have not been immune to declining sales, but US sales were down just 2 to 3 percent year-on-year in August, compared with double-digit declines in other apparel categories, according to Earnest Research. Investors appear to be more optimistic about the outlook for sportswear than other apparel categories: by October 2020, sportswear company stocks had exceeded their pre-crisis-levels by 7 percent, while the non-sportswear clothing category was down 18 percent.

One driver for the category is an uptick in cycling as an alternative mode of transport. Sales of bicycles doubled in the US and grew in many other countries during the spring lockdown, and the growing number of cities implementing more bicycle-friendly mobility concepts points in the direction of sustained demand for bikewear and waterproof clothes. In early 2020, luxury brand Moncler even partnered with the eBike start-up Mate for one of its Genius collaboration collections.

More broadly speaking, the casualisation trend that was already in motion before the pandemic and that accelerated throughout 2020 is likely to emerge as a dominant force across many fashion categories in 2021. Indeed, companies that were able to ride the surge in demand for casual or athletic clothing fared better than analyst expectations in the second quarter of 2020, such as American Eagle Outfitters-owned Aerie which launched new athleisure brand Offline in July. With more flexible working arrangements on the horizon for the year ahead, casualwear is only set to grow in importance for many fashion players.

Some companies have been quick to pivot to these new consumer dynamics. Dolce & Gabbana’s Alta Moda (haute couture) collection normally sells lavish, custom-made occasion wear. In the season that fell during lockdown, elaborate gowns and eveningwear were replaced by a capsule collection of kimonos, kaftans and other easier-to-wear items. Meanwhile, formalwear brand Reiss took a hint from the success of its more leisurewear-focused pieces and launched a new “luxe leisure” collection.

Lockdowns and restrictions on movement have strongly influenced consumer choices around what to wear.

Looking forward, as demand remains subdued in 2021, fashion companies should aim to mirror shifts in consumer behaviour across their product offering and double down on growth hotspots. Strategic plans should reflect “heat maps” of better-performing geographies, categories and value segments, with ideas road-mapped so that companies can respond quickly to opportunities when and where they arise. Investment in marketing, new stores and staffing will be best directed at geographies in which demand is picking up fastest. Product marketing campaigns should focus on in-demand categories such as athleisure and loungewear and be given a spotlight in prime locations like online landing pages.

Brands in formalwear categories, meanwhile, can opt to rebalance assortments towards a higher proportion of easier-to-wear items without compromising on quality. Given the ongoing polarisation of demand across value segments, it will also make sense for premium players to consider whether they have enough brand equity to position themselves at higher price points. Across categories, however, the underlying principle remains the same in the challenging environment of diminished demand: winning brands will need to act quickly on changes in consumer behaviour while staying true to their brand identity.