The Year Ahead: Consumers to Seek Justice in the Supply Chain

With low-level workers throughout fashion’s global supply chain facing the sharp end of the crisis, consumers will increasingly expect companies to offer them more dignity, security and justice.

The Year Ahead: Consumers to Seek Justice in the Supply Chain

With low-level workers throughout fashion’s global supply chain facing the sharp end of the crisis, consumers will increasingly expect companies to offer them more dignity, security and justice.

Fashion’s impact on the environment has been in the crosshairs of public perception for some years, as environmental activism increased in prominence and brands started to become more transparent about their practices. Now, social justice and human rights issues are gaining a higher share of voice in the conversation about the fashion industry’s pressing need to improve its sustainability credentials. While it is yet to be seen whether consumer attitudes will translate into tangible changes in purchasing behaviour, it is certain that the pandemic has amplified public awareness of social injustice in the supply chain.

Indeed, as factories closed in early 2020, orders were cancelled and payments were deferred or renegotiated, the plight of the 40 to 60 million global garment workers impacted by the crisis became even more visible to consumers. Suppliers across the world were reported to have lost over $16 billion in revenues between April and June 2020. In May, labour rights activist Kalpona Akter painted a stark picture of the plight of garment workers. “Everyone in the supply chain needs to understand that all the… cancellations [and] not getting money is put on the workers’ shoulders,” said the founder and executive director of the Bangladesh Centre for Worker Solidarity, in an interview for The Business of Fashion Podcast. “Why is it always us that has to suffer, even in this pandemic?”

The pandemic has amplified public awareness of social injustice in the supply chain.

There are signs that the fashion-buying public is taking action to demand better treatment of workers in the value chain. Thousands of consumers worldwide have participated in the #PayUp campaign, which calls out brands that have not committed to pay for in-production or completed orders during the Covid-19 crisis, which consequently puts millions of vulnerable workers at risk. As public concern and campaigns grow, a growing number of brands have started to look at more fundamental changes in their purchasing practices.

But manufacturing is not the only area under scrutiny. The social justice spotlight has turned to all aspects of the fashion value chain, from the fields where textile fibres are grown to the stores that stock final products. When the Arcadia Group, whose high street brands include Topshop and Dorothy Perkins, attempted to award as little as 50 percent of notice pay to some head office staff facing redundancy, the combination of negative press, campaigner action and a union’s threat to take legal action compelled the company to reverse the decision. However, at the same time, there are many instances of accusations of poor worker treatment or unfair compensation at warehouses and logistics centres that persist without intervention.

Consumers are demanding more from brands in their engagement with socio-political values, too. Kantar Monitor research found that 54 percent of consumers believe brands “have an important role to play in social conversations about issues like #MeToo and race relations,” but when brands fall short, consumers are quick to call them out. Brands that jumped on the Black Lives Matter movement with tokenistic marketing messages have faced accusations of hypocrisy, while many brands have been called out for having all-white upper management teams. 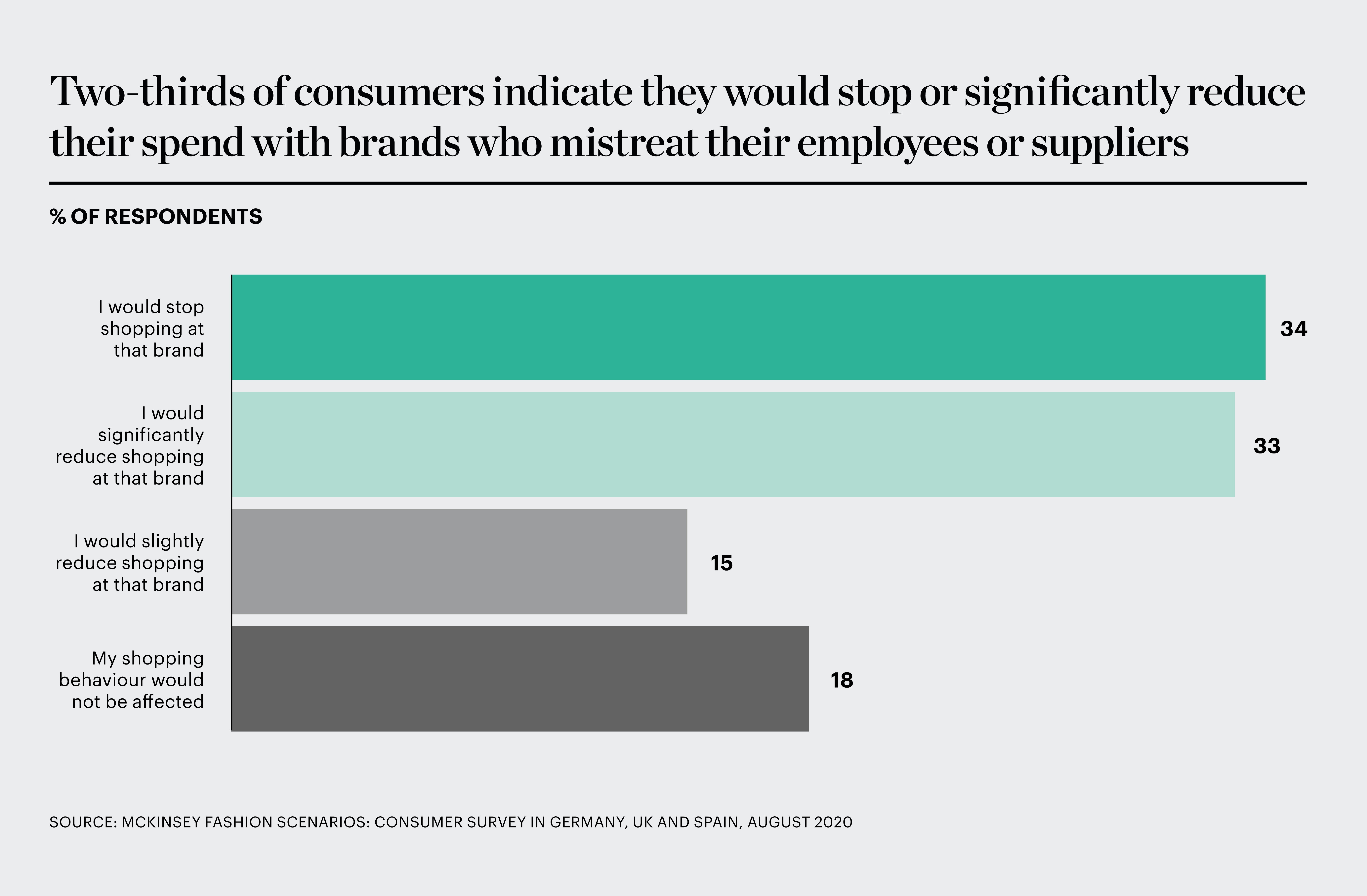 In the year ahead, the longer-term trend of citizen activism will continue, boosted by social media and a widening gap between the rich and poor exacerbated by the pandemic. Gen-Z, which will account for more than 40 percent of global consumers in 2020, will lead the charge as the most politically active age group on social platforms. In the US, research by the Pew Research Center shows younger cohorts are most likely to encourage action online and to use hashtags relating to political or social issues.

Still, the overall picture remains complex. Often, the strongest critics of brands are not their biggest consumers, and infringements of social justice or human rights do not always translate to declining sales. UK-based Boohoo Group saw its share price dive in July 2020 amid allegations that its factory forced employees to work when sick, on a wage of as little as £3.50 (approximately $4.50) an hour. An independent review commissioned by the brand and carried out by Alison Levitt QC found that the allegations of “unacceptable working conditions… are not only well-founded, but are substantially true.” In Boohoo’s response to the review, Group CEO John Lyttle said that the company would need to “go further and faster” to improve its governance and compliance. However, the company’s sales still rose nearly 50 percent quarter-on-quarter and its share price recovered fairly quickly.

Clearly, there is often a gap between consumer attitudes on social justice issues and their purchasing decisions. What is unclear, however, is how long the gap will last. In an August 2020 survey by McKinsey, 66 percent of consumers said they would stop or significantly reduce shopping at a brand if they found it was not treating its employees or suppliers’ employees fairly.

Among marginalised communities, consumers increasingly expect fashion companies to put money behind their stated values when it comes to racial injustice. It is with this in mind that Aurora James, the founder of sustainable shoe and handbag brand Brother Vellies, launched the 15 Percent Pledge, a non-profit that campaigns for diversity in the fashion industry by challenging retailers to dedicate 15 percent of shelf space to Black-owned businesses. “Historically, less than 1 percent of venture capital money has gone to Black individuals,” said James, in an October 2020 interview with BoF. “It’s not that Black people aren’t already ideating on amazing products or creating them on their own, it’s that they don’t have the resources to package them and put them out in a way that’s going to work for those resources.”

In many countries, heightened citizen awareness is helping to build momentum for new employment legislation, though it is important to note that labour laws have historically been poorly enforced. The European Commission, for example, has committed to setting rules for mandatory corporate environmental and human rights due diligence, which is in a discussion phase as of October 2020, while in Germany there are plans to enforce protection of supply chain workers. Meanwhile, Middle Eastern states including Qatar and Lebanon are taking steps toward abolishing the punishing “kafala” (sponsorship) employment system for migrant workers. However, progress does not always follow an upwards trajectory — India cleared new labour codes in September 2020, raising concerns that workers could be fired by employers more easily, and in California, a new bill to protect garment workers was deprioritised from discussion in the 2020 legislative session.

Now it is time for fashion companies to adhere to the highest standards of human rights and social justice issues across business operations. The key in these endeavours should be authenticity and action, which can be achieved through meaningful engagement with trade unions, direct worker engagement, non-profits and workers’ rights watchdogs.

Companies should focus on transparency and concrete plans to support commitments as a first step. Introducing concrete changes to purchasing practices are crucial, such as ringfencing labour costs in negotiations as a way to pay workers in the supply chain a living wage. Finally, decision-makers expecting furloughs, layoffs or shifts to temporary contracts should prepare workers for any changes and resist the temptation to cut corners at a time in which employees — and their personal finances — are increasingly under strain.