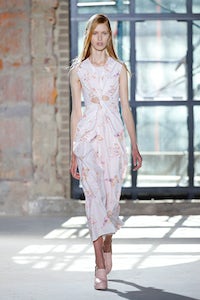 NEW YORK, United States — The backstory behind the new label Sies Marjan is really quite unorthodox. Sander Lak, who spent almost five years working as Dries Van Noten’s head of design, moved to New York one year ago when he was recruited to build a label from scratch. The proprietors of the project are billionaires Nancy and Howard Marks, who founded Oaktree Capital Management, and chief executive Joey Laurenti, whose showroom Goods and Services is, like Sies Marjan, owned by the Marks’ holding company Deia LLC.

But Lak is not the first designer to enter the Deia fold. Before Sies Marjan, the Marks invested in Ralph Rucci, the American couturier whose work is revered across the fashion world. At the end of 2014, however, Rucci suddenly left his own label. At the time, the company said it would announce a new creative director to helm the Ralph Rucci brand. But that idea must have been brushed aside, because they chose to start from scratch instead with Sies Marjan, forming something entirely new and free of connotations.

It's an interesting move, even if the situation does feel oddly manufactured. But there is real promise of a future here, signalled not just by the impressive lineup that helped produce the show — from Vetements stylist Lotta Volkova to casting director Anita Bitton — and the list of important industry attendees, including Anna Wintour, Natalie Massenet and Stefano Tonchi, who filed into a raw penthouse space atop the 58-story Barclay Tower for the proceedings.

To be sure, Lak is a fully formed designer, whose debut collection won over the crowd as soon as the first model stepped onto the runway in his wonderfully curvy shoes. Backstage, Lak said the starting point for the collection was a pure silk jacquard that featured photo-realistic, rainbow vignettes of club kids, which he found “almost in a bin” at a mill in Italy. The fabric was cut into cropped trousers and a collarless overcoat, then paired with a matching knit top — a new way to think about the three-piece suit.

“I’m really sensitive to colour,” Lak explained, perhaps not surprisingly given his tenure at Dries Van Noten, but it showed in his deft use of acid tones, like the lemon rind-coloured ensemble of cropped tie-waist trousers, washed satin top and fur overcoat paired with matching clogs. Then there was the tangerine trench harnessed onto the body and worn like a cape. Twists and turns abounded — tie-front shirts, loosely hanging jumbo ruffles — but it was the warped seam that wiggled down the front of a faintly striped gown that really drew the eye.

More than anything, these were very pretty, desirable clothes in slender, easy-to-appreciate silhouettes, from the washed duchesse satin turtleneck in a dusty rose paired with flap-hem trousers to the robe coat done in five-ply wool silk that looked like a beautifully dizzying garden of static. Building a new luxury fashion brand is notoriously challenging, but both the Marks and Laurenti are betting that Lak is up to the challenge. If this collection is any indication, they very well might be right. 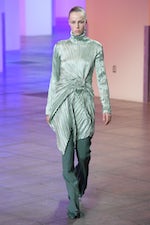 The Seductive Languor of Sies Marjan 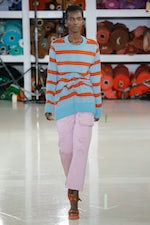 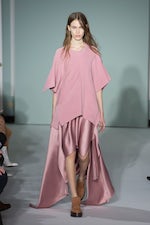 Leaning In at Sies Marjan 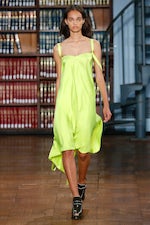 At Sies Marjan, Love Is Better the Second Time Around