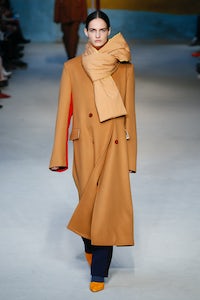 LONDON, United Kingdom — “Once in a lifetime clothes,” is how Roksanda Ilincic described some of the show-stopping confections that she sent down the catwalk this morning. Masses of tulle, en tremblant feathers and giant sequin discs helped establish the flight of fancy. At the heart of her show, however, were modest clothes that she designed to protect women — a concept pertinent to the current climate. Cashmere blankets draped around them, fluffy brushed camel hair coats enveloped them, eiderdown outerwear and scarves were layered onto lighter clothes and covered-up silk dresses were knotted around the body. Even the coats, which are usually softly shouldered and cocoon-like, took on sharper precision edges.

Ilincic worked with Parisian artist Catherine Denervaud, a former dancer whose work explores organic feminine forms and play with shape, bodies and illustrative lines. The show itself was a living gallery for the works made just for Roksanda, and the colours — a soft palette of primrose yellow and powdery blues and pinks — were a celebration of femininity, according to the designer. It comes after an evening when Hollywood actresses, so many of them fans of Roksanda’s red carpet-worthy dresses, wore black at the BAFTAs in support of the Time’s Up movement. In light of that, Ilincic’s parade of considered colour took on a refreshingly momentous tone the following morning.