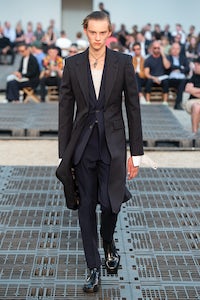 PARIS, France — McQueen’s menswear works best when there is a character-driven narrative to infuse the clothing with substance. So it was with Friday night’s presentation, and a collection which drew blood from artist Francis Bacon’s decadent, rackety life in the Soho of the 1950s and 60s. The extreme, indulgent and iconoclastic sensibilities of Bacon and his photographic Boswell John Deakin informed a show which veered between slumming Establishment toffs in pinstripes, rent boys in leather and bare-torso-ed, paint-splotched male sacrifices to the god of all-consuming artistic ambition. Bacon’s world, in other words, as he lived it in a time when his brand of transgression was fiercely taboo.

That loaned a frisson to Sarah Burton’s collection. One of the descriptives she used was “cutting”. There were a few ways to construe that. Most obvious was the stark precision of the clothes, the way, for instance, that a gabardine trench featured sleeves slashed to the elbow, flashing pink duchesse satin. Another trench was ruthlessly truncated into a capelet. Classic coats were lean, their suppressed waists creating a lethal silhouette. There were also incursions of the unexpected, like the satin back on a camel coat, or the broad brushstroke swooping across a jacket in threads of silk, which dispersed in dangling chaos.

“Cutting” also implied a similarly chaotic undertow. Like the dangerous hyper-maleness of Bacon’s thuggish lover George Dyer, all razor tailoring and chisel-toed shoes. And studded leather. But also Deakin’s chalky graffiti (“guttural and instinctive,” Burton appropriately called it) rendered in embroidery, and suits and coats soaked with colour, like painter’s rags. The spontaneity of such a flourish was refreshing in the hyper-studied context of McQueen menswear. The invitation for the show featured a Bacon quote that seemed particularly relevant: “I think that painting today is pure intuition and luck and taking advantage of what happens when you splash the bits down.”

Lingering in the “cutting” zone, Burton saved a zinger for her post-show interviews. Queried about the absence of streetwear in her collection, she answered, “But this is street, in a 50s or 60s way.”