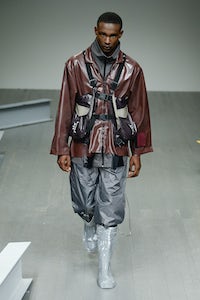 LONDON, United Kingdom — Samuel Ross only started A-Cold-Wall in 2015 and, in those two short years, he has built a business that’s attracted some of the world’s most influential stockists with an urban-utilitarian wardrobe of techno-fabrics and in-the-know branding. Today’s show took its cue from scaffolders, construction sites and other hubs of everyday working-class life. The Brixton-born designer also name-dropped Antony Caro as a reference, citing how his industrial materials were transformed when transported into a gallery setting.

A wide range of shiny thermoreactive raincoats, puffa jackets and gilets in jewel tones, strapped up by plastic release buckles, formed the backbone of the show. There were also paint-splattered fishmongers’ boots, utilitarian wide-leg trousers with several pockets and plenty of drawstring that nipped and tucked the silhouettes of workwear trousers and tightened shiny hoods. And all of that stiff plastic, hard rubber, crinkled leather and silky vinyl created a sense of materiality almost felt sci-fi survivalist, preparing the wearer for the worst-case scenario.

Counter to all that, however, were a few deconstructed Italian-made knits and softer-looking wool pieces, like the tactile zip-up car coats in sorbet yellow and pale blue. Ross explained that he wants to make sure there’s something for everyone, from the young hypebeasts queuing up outside Dover Street Market to the luxuriant sybarites who will mix the pieces with buzzy high-end brands.

Ross was a long-time assistant of Virgil Abloh, and it’s easy to see a similar sensibility, although it has to be said that Ross’ collection felt more sophisticated and sincere. Whereas his earlier work was predictably hyper-branded, today’s show showed some restraint in printed letters. The branding that was present was not just A-Cold-Wall’s logo, but the National Gallery’s too. Ross explained that the collaboration stemmed from the idea of a fictional room in the institution, which he imagined housing his vision of working-class construction sites and heavyweight workwear. That would mean they would be under the same roof as all those grand Rembrandt’s and van Dyck’s. As his label enters an exciting year with prosperous announcements on the horizon, it’s somewhat fitting.