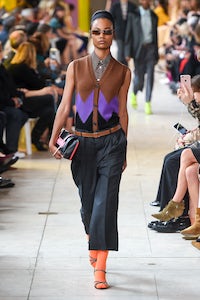 PARIS, France — There are few designers who appreciate the fact that fashion doesn’t exist in a vacuum as intuitively as Miuccia Prada. A Prada show is an object lesson in context. Everything — from the set to the drinks she serves — amplifies and clarifies the message of the collection. Obviously, music has always played a big part, maybe now more than ever. “Music is what holds everything together,” she agreed on Tuesday after a Miu Miu show where Frederic Sanchez, her longtime sonic collaborator, created a soundtrack that was so vivid it was almost another character on the catwalk. A list of the artists tells the story, among them, the Pixies, Bikini Kill, the Breeders and a finale tracked by the Ramones’ version of "Baby, I Love You" (chosen by Katie Grand, another longtime Prada collaborator, for her wedding). Sanchez’s picks had a hard, aggressive edge which took a few cues from the music he used for Prada’s signature collection in Milan.

Miuccia said she had two things in mind: “the girl” (which was why she worked so hard on the casting for this show – she saw a thousand models!), and the contrary spirit in which Miu Miu originally launched nearly 25 years ago. “The freedom I felt at the beginning,” she called it. In those days, Prada was a company whose clothes dazzlingly defied conventional notions of taste and propriety. Now it’s a massive global brand battling institutional stasis. But in her last few collections, there has been a pervasive sense of Miuccia Prada kicking against the pricks. It was strong in Miu Miu, in the way that an oversized distressed leather coat wrapped a white lace shift; in the strange granny crochet, with its undercurrent of purity defiled; in the confrontational oddities that rendered beauty redundant, or at least, as Miuccia said, “make it possible in real life, not just for the limousine or the hotel” (need to think about that one!).

Man tailoring was matched to fabulous graphic knits. Almost everything was veiled in a sheer overlay, which sometimes looked pure, and other times prurient. There’s a dialogue of opposites in there that Prada has always managed to conduct with extraordinary skill: prurience and propriety, restraint and release, the cerebral locking horns with the physical. Footwear flat and functional. Heads bound. Bodies primed for action. What is new now is that Miuccia is fired up by the state of the world. Back to that soundtrack: rough, tough, shreddingly dismissive of male crap. Not quite clothes to match just yet. But wait.